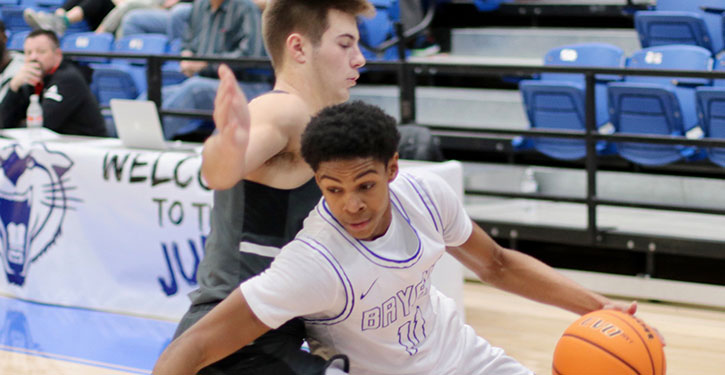 Hornets set for benefit game tonight then wait for reinforcements

The Bryant Hornets basketball team that takes the Hornet Arena floor tonight in a preseason scrimmage against the White Hall Bulldogs will be incomplete.

“Right now, we’ve got about half our roster out here,” said Hornets head coach Mike Abrahamson. “We’ve got more players in football than ever before. So, we’re going to be a lot different in about a month than we are right now.

“We’re really looking forward to getting those guys when they’re done,” he said. “We’ve backed our schedule up because I just haven’t liked playing too many games before I get those guys, and now we’re getting more and more in football, which I don’t mind. But I backed the schedule up, so we don’t, in a way, have two teams.”

“We’re looking forward to getting those guys because they’ll bring physicality and a little bit more competitiveness then what we’ve got right now,” Abrahamson said.

“Right now, we’ve got some good guys and some good players,” he asserted, “but it’s just not as competitive as I want it to be.”

The returning players currently on the court include Cameron Hunter, one of the top players in the state. He plays inside, outside — wherever needed, as he begins his fourth varsity season.

“Cam’s doing well,” Abrahamson acknowledged, “but one guy can’t — and Cam has grown up and he’s doing better but you know he’s still growing.”

“We just need the extra guys, these bodies, because it’s going to create a lot more competitiveness in practice,” the coach reiterated. “When there’s only 10 or 11 — or sometimes we don’t even have 10 because we’ve had some players get quarantined from close contacts in class.

“There’s just not as much competition for what’s going on out there,” he said. “These guys that are out here now, I’m trying to get through to them that this is their opportunity — they’re here every day — to earn something. But it’s not getting through like I want it to.”