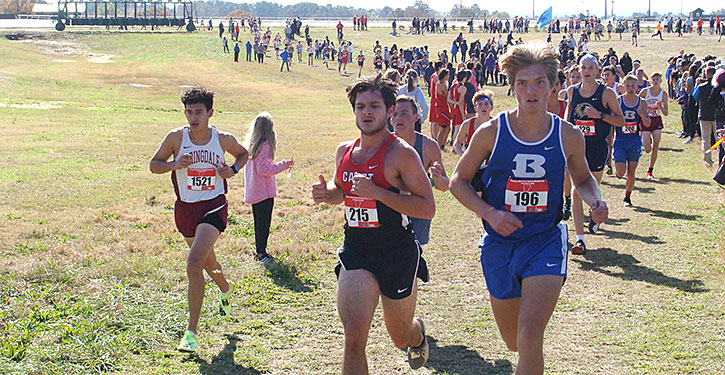 HOT SPRINGS — Behind top 20 finishes from Hagan Austin and Bresner Austin, the Bryant Hornets cross country team stepped up at the Class 6A State cross country meet at Oaklawn Park in Hot Springs with a top 5 finish as a team in the 16-team field.

The Hornets were the second team to finish from the 6A-Cenral with 149 points, narrowing edging Bentonville West (150) for fifth. Conway was the top Central team, finishing fourth with 138 points.

As often has been the case, the 6A-West dominated the top spots in the race, which was won by Bentonville with four runners in the top five, overall. Fayetteville was second with 36 and Springdale Har-Ber placed third with 89.

“This was a tremendous way to finish the season,” said Hornets head coach Steve Oury. “We saved our best for last and a top 5 finish was our reward.

“We looked at Cabot, Bentonville West and Rogers as teams that we could beat if we ran our best, but we also knew that all three of those teams would be ahead of us an average day,” he mentioned. “To beat all three of them was the icing on the cake.

“Hagan Austin ran the race of his life,” Oury declared. “And Bresner Austin was right there with him. Chris Herrera ran under 17 minutes for the first time, and Luis Martinez and Christian Brack did a great job of. Rounding out our top five.

“I couldn’t be prouder of all the guys who competed for us today,” he concluded.