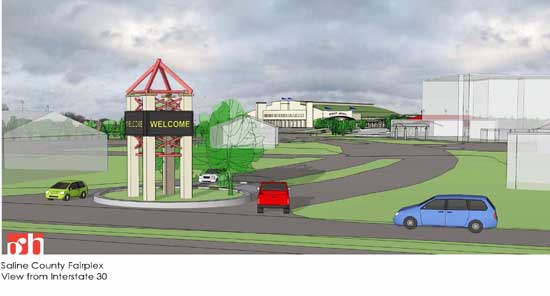 BENTON — Voters have the right to know what an additional, but temporary, one-cent sales tax could mean to the future economic development of Saline County.

That’s why Benton’s Advertising and Promotions executive director Jill Jones has taken a personal interest in the research and planning aspects of a possible Saline County “Fairplex” that, according to Jones, could bring in as much as $32 million a year in revenue. And that’s a low estimate, said Jones, who plans a series of town hall meetings in Bryant during July for citizens to ask questions and gain knowledge about the project.[more]

“If you had to buy a house and you could pay for it in five to seven years, that would be a good investment and that’s what we’re talking about here,” Jones said. “It’s a multi-generational impact that would be paid for in five to seven years, if not sooner. To get two-thirds of the investment back each year it’s open — and the $32 million is a low estimate — that’s something worthy of consideration. My goal is to make people understand the project.”

The cost of the $55 million facility would be paid for by a one-cent countywide sales tax for bonds that would be temporary. A special election is to be held on Aug. 10 for voters to go to the poles on this issue.

“I want people to have accurate information about it,” Jones said. "It’s not a pie-in-the-sky thing, it is something that has been very well researched and vetted. I want Saline County to have a chance to do it first. It’s a short-term investment for a long-term gain.”

By law, the Benton A&P spearheaded the project that was started some nine years ago. Just in the past two and half years after meeting with a multitude of special interest user groups, has a master plan been developed.

“We were able to develop the plan to this point to give the voters something to decide on,” Jones added. “It’s an amazing opportunity for our county for now and generations to come.”

Nine years ago, an economic impact study was done on Saline County to find out what would be the most direct and positive route to economic development. The study took into consideration everything from major industry to outlet and retail malls, but the most opportunistic item that was conducive to the economic growth was to become a type of tourism destination for special groups.

After many plans were developed through 16 monthly meetings with architects over the last two and half years, it was the decision of a steering committee headed by Saline County Judge Lanny Fite that put the plan into motion.

Concert venues, fairs, carnivals, sports shows, trade shows, athletic events, equestrian shows, and many other special interest groups were considered in the making of the master plan which shows construction at the existing county fairgrounds south of Sevier Street in Benton.

“I think it’s good for Saline County,” Bryant mayor Larry Mitchell said. “It’s an opportunity for Bryant and Benton to bring in a lot of people, but obviously more Benton than Bryant. It would be great for the hotels, motels and restaurants around it.”

However, the city of Bryant already has the highest sales tax in the state and that makes it harder for Jones to convince Bryant residents that an additional one-cent tax would be beneficial.

“It’s going to be hard for people in the Bryant area to understand it,” Mitchell said. “Nearly 85 percent of the residents work in Little Rock and attend church or school here. There’s not a strong connection. We’ve already got a three-cent sales tax and I think this will be a tough sale. As far as the project, it’s a very good idea and will be beneficial, but the only negative thing I can see is the way the economy is right now.”

Jones realizes that this project isn’t going to please everyone.

“I had somebody say that we should build a wall around Saline County to keep people out and I’m glad those people are in the minority,” she said. “We’re never going to please everybody, but it’s my firm belief right now there is not a better economic development prospect in the county period. The numbers we have shown to the public are on the conservative end. Of the $32 million spent in the county after opening, 30 percent would be spent in Bryant. The city itself would benefit from the sales tax generated from it and that would go on forever. It is a short-term investment. The sales tax we are asking them to vote on in August is expected to expire in five to seven years when the bonds are paid off and those estimates are based on 2006 figures with no growth.”

It would take anywhere from 18 to 24 months to construct the Fairplex, which means that materials would be taxed, but those brought in to build the complex, around 800 people, would be spending money in the county for up to two years before its completion. Jones thinks it is a feasible notion that the bonds could be paid off earlier than anticipated.

“We need something that is a positive economic catalyst for private economic development in our county,” she said. “Right now, we don’t have anything that brings in the critical masses of people to support our local businesses more than once or twice a year. We have the Wally Hall tournament, Cal Ripken tournaments, the Saline County Fair, but they are not on a regular basis and we are not a destination. We have a wonderful community and people come through here and stop at restaurants and businesses in Bryant. The reason we wanted to develop a plan based on all the research we’ve done to show that we are in the right location and are the right area with an intersection of roads in the heartland of the country. There is not a facility like this within 300 miles and it would fill a niche identified by people out of the state of Arkansas.”

Why build it in Benton?

“The land was available,” Jones said. “We could have considered some place else if there had been a suitable piece of land in other areas. It did not have to be in the city limits of Benton, but this will be a county-owned project. We’re trying to do something positive to fund it and it will be turned over to the county, like the courthouse and the regional airport.”

There will be 330 permanent jobs created because of the Fairplex and one-third of them are estimated to be in Bryant, Jones said. Only 30 to 35 people are needed at the facility full-time and the other jobs are as a result of an influx of money in the local economy.

“I realize Bryant has one of the highest city taxes in the state, but I can’t control that,” Jones said. “We need this for economic development. It won’t be a tax forever, but it is needed as a catalyst for private sector development. That’s what this does. It creates a destination for people. It puts us on the map and allows our local businesses to bring in four times the number of people to support them.

“Talking to some hotel owners in Bryant and Benton, their occupancy is not stellar during the course of any given year,” she continued. “We have peak weekends, but they need people there every week. This is not a new or novel idea. If Saline County doesn’t do it, someone else will and I’d like to see Saline County get there first.”

Another positive effect would be for the two major Chambers of Commerce, Jones said.

“It would be an advantage for bringing in new businesses if we were able to say that we have 110,000 citizens plus 400,000 visitors in a given year,” Jones added. “That would give us a major leg up in economic development. We know there are not enough hotels in Benton, so Bryant will be the number one contributor. Consistently, Bryant will be the beneficiary of 30 percent of revenue generated because of the Fairplex.

“We need to determine as a voting public in Saline County, where does the best opportunity lie?” she concluded. “The best opportunity is to bring in people from the outside and let them go home again, so we can maintain our lives here like normal. I don’t like paying taxes either, but I am all for a well-thought out plan where the risk has been mitigated to the point where it’s worth a shot and let the people decide on it.”

Attached is a pdf file with more illustrations of the proposed project. 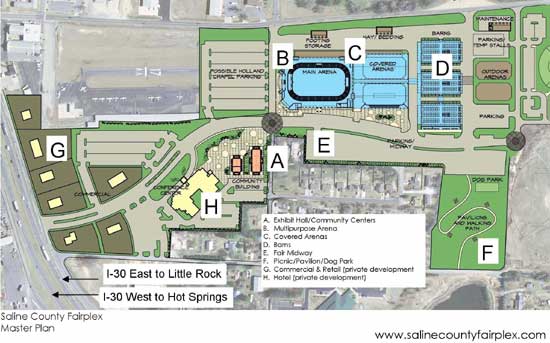