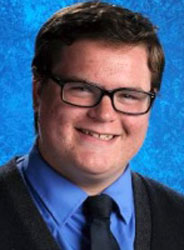 He is one of approximately16,000 Semifinalists in the 62nd annual National Merit Scholarship Program.

A Semifinalist must have an outstanding academic record throughout high school, be endorsed and recommended by a high school official, write an essay, and earn SAT® scores that confirm the student’s earlier performance on the qualifying test.

Junkins is active in many clubs at Bryant High School. He is a member of the National Honor Society, Mu Alpha Theta, the Future Business Leaders of America, and Youth Alive. He competes on a state level as a member of the Quiz Bowl team and for Arkansas Model United Nations and Model Arab League.

Music and drama are two of his passions. He is an enthusiastic member of the Legacy of Bryant, where he serves as Section Leader for the Mellophones and First Chair French Horn in the Wind Ensemble. He was a cast member in musicals produced by the BHS Drama Department including Les Miserables and Anything Goes.

No doubt his love of the arts played a part in Junkins’ choice to attend Vanderbilt University’s Blair College of Music to study Music Composition and Music Education after graduation. His college education will prepare him to compose theatrical and cinematic scores, writing the music for stage musicals as well as movies.

“I hope by entertaining and enlightening audiences, my music will spread awareness for the underprivileged among the American people,” he said. “I also hope to one day teach instrumental music inspiring young musicians and helping safeguard the future of music and the fine arts.”

Junkins attributes his high score on the PSAT to several factors—his education at Bryant High School; his experience taking the exam as a sophomore; hours of studying in the weeks prior to the test date; and encouragement and motivation from his English teachers.