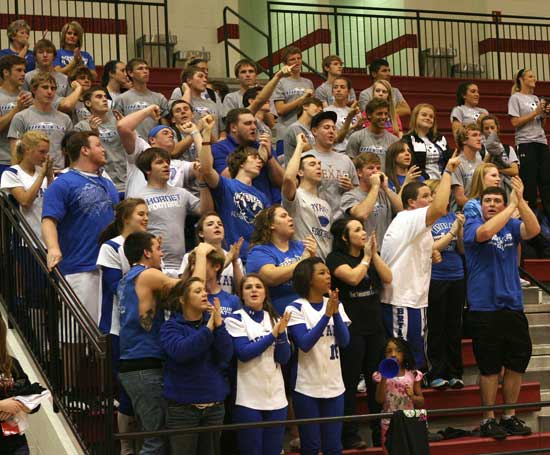 SEARCY — Bryant athletic teams were all about winning Thursday evening. At Searcy, both Bryant soccer teams[more] prevailed over perennial powerhouses to open their season and they got finished in time to stop by the arena at Cabot for the Class 7A State basketball tournament to root on the Hornets basketball team. They drew a big cheer when they joined the student section for the contest.

All for one, one for all.

The Hornets had just dismissed the Lions in their own den, 2-1. The Searcy boys have won five straight Class 6A State championships.

The Lady Hornets pinned a 2-0 loss on the Searcy girls, who have won three of the last five 6A titles.

“Searcy was fast and physical,” noted Hornets coach Jason Hay. “Our kids played very hard and I was proud of the effort.”

Searcy was unable to score until late in the contest. Bryant had taken a lead in spectacular fashion.

“From a long throw-in from Jesse Wolf, Ben Stukenborg flicked the ball to Alex Rowlan for the assist,” Hay recounted. “Alex made a diving header in to the corner of the goal.”

Wolf added the second goal off a shot from 30 yards out.

“It dipped in at the last second, just under the crossbar,” Hay said.

Hornets keeper Jace Denker had several saves in the game, the coach noted.

“Searcy got a goal late in the half and came back to life,” noted Hay. “We started playing not to lose and lost our attack.”

The Hornets visit Benton to play the defending 6A-South Conference champion in their next outing on Thursday, March 8, then travel to northwest Arkansas for a tournament that Saturday, March 10.

In the girls game, the teams fought through a scoreless first half.

“The girls got some jitters out in the first half,” she said. “Once we knocked those out, we started playing a lot better. The second half, we started moving the ball well and connecting our passes in the attack.”

The first goal came with about 25 minutes left in the contest.

“Rori Whittaker threw the ball in to Maggie Hart, who crossed it back side and Kaitlin Gaiser was there for the finish,” Long said.

About 10 minutes later, Hart had a corner kick. Whittaker was there to finish the cross.

“We had a third off another corner but it got called back because of interference with the keeper,” Long mentioned.

“Overall, for our first game, I was very pleased,” she commented. “Searcy is a good team and this was a good non-conference win for us. Our defense held strong and we held them for the shutout.

“We still have a lot to do to get ready for conference but every day we are focusing on getting better,” she concluded.

The Lady Hornets head to Harrison on Saturday for a tournament.

“This tournament will be a good test to see where we’re at,” Long stated.