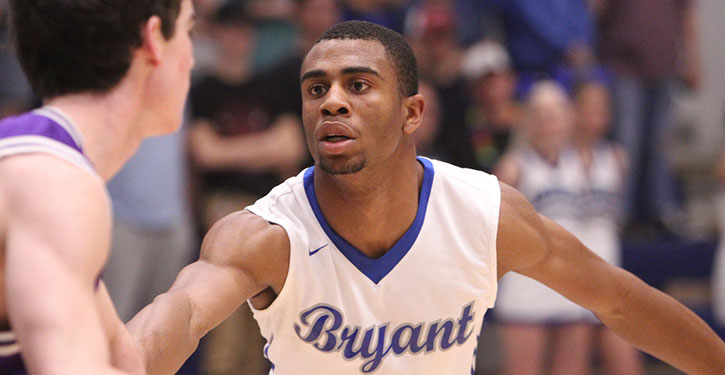 The Hornets held on for a 50-44 win to advance to a second-round battle with 7A-Central Conference rival Fort Smith Northside Friday night at 8:30. Northside’s Grizzlies swept the Hornets in league play but had to go to overtime and score at the buzzer to survive at home.

Bryant improved to 18-10 on the season and completed a first-round sweep of the 7A-West by Central teams.

The Hornets trailed only briefly in the game. Van Buren’s 6-7 sophomore K.J. Stewart hit the first basket of the contest. After Bryant’s Romen Martin answered with a 3, the Pointers didn’t lead again until late in the half, which they closed out with a 9-2 run, sparked by a hot streak from guard Jordan West, who had 10 of his 12 points in the quarter including Van Buren’s only two 3-pointers.

A layup by Marvin Moody off a nice feed from Kaleb Turner gave the Hornets a 23-22 lead with a minute left but, in the final seconds, Beau Beckner scored for Van Buren to give his team a one-point edge at the half.

Bryant, which had pressed man-to-man in the first half, switched to a zone press with trapping in the second half. Though there was only one more turnover for the Pointers after intermission, the zone may have sparked the Hornets offensively.

“We wanted to pressure them but what we were doing to start the game didn’t really have the effect that we wanted to have,” explained Hornets coach Mike Abrahamson. “Give their kids and coaching staff great credit for that. We couldn’t rattle them with our man pressure so we went to zone pressure and that got to them a little bit more. Sometimes I don’t know if it’s necessarily what we’re doing as much as it’s just a change. You kind of get into a groove with one thing then you change on them and it takes them out of their rhythm.”

It didn’t hurt either that the Hornets were dominating the boards. They wound up with a 29-18 edge led by Braylen Steen who had nine caroms to go with a team-high 15 points. Five of Steen’s boards were on the offensive end and 15 of the Hornets altogether.

“I thought Steen was really good on the boards today,” said Hornets coach Mike Abrahamson. “He was there in some key moments. Then we got some long ones as well from some 3’s.

“It gave us extra possessions,” he noted. “We got 41 shots to their 35 and we got 20 free throws to their eight. So anytime you can get those extra shots, especially for us — we don’t shoot it well, we don’t finish well.

“We have shot free throws better than we did today but the layups and the shooting percentage, that’s kind of been our story all year,” the coach said. “So getting those extra shots, extra looks, is big for us.”

Steen’s stickback to start the second half tied the game. Beckner, who led all scorers with 20 points, answered with a three-point play to put Van Buren up 27-25, matching their largest lead of the game.

A jump hook by Lowell Washington off a nice dish from Calvin Allen knotted it again then Allen and Sam Chumley combined to force a turnover. Chumley fed Steen and it was 29-27 Bryant.

Stewart scored inside to tie it up one last time. Washington answered with a 3 that put Bryant ahead to stay with 5:03 left in the third quarter.

It stayed tight, though. West scored and was fouled but missed the free throw that would’ve tied it again. Both teams had chances to change the 32-31 score before Allen drove and scored over Beckner, who tried to take a charge but was called for a block. That resulted in a three-point play.

Beckner and Marvin Moody traded buckets and the game went to the fourth quarter with the Hornets up 37-33.

Up 39-35, moments later, the Hornets got a big bucket on a 15-foot jumper by Steen then forced a Van Buren turnover. Martin and Allen worked the backdoor play on a give-and-go resulting in a trip to the line for Allen and a 43-35 lead. He followed with a steal but the Hornets were unable to cash it in.

Beckner hit a free throw to cut the margin to 7 but the Hornets again took advantage of the Pointers’ over-aggressive defense as Allen fed Sam Chumley on a backdoor cut for a layup and a 45-36 lead with 4:01 left.

“We just try to be prepared for every situation and you don’t think of Van Buren as a team where you’re going to get those looks but they were in a situation where they were having to play tighter and a little bit more aggressively so we went to it to try to exploit it,” Abrahamson mentioned.

Neither team could score again until, with 2:41 left, Moody hit a free throw after taking a pass from Allen and getting whacked across the bridge of his nose, losing a contact lens. The free throw made it a 10-point lead.

Van Buren’s Presley Kindrix drove for a bucket and, after a timeout with 2:28 showing, Moody got inside and had his shot blocked by Stewart. But he hustled after the carom, going to the floor to keep it from going out of bounds and calling a timeout to save the possession.

And that proved to be a big possession as Allen fed Washington for a layup as he was fouled. The chance for a three-point play fell through, however, when the free throw failed to fall.

Beckner hit a jumper in the lane and the Pointers forced a turnover to get a chance to cut it to 6. But Washington picked off a pass and, with 1:21 left, Allen went to the line shooting the bonus.

Again, though, the free throw rimmed out. So when Kindrix hit a 12-footer, the margin was 6. An offensive foul cost the Hornets as Van Buren jumped into a trapping press but Beckner missed and, with :41.8 showing, Martin was fouled. The first of his bonus opportunity refused to fall as well, leaving it a two-possession game.

Kindrix tried a 3 but couldn’t get it to go and, in traffic, Steen out-maneuvered Beckner and Stewart for the rebound. He was fouled with :27.1 to go. Now in the double-bonus, Steen got two shots and, much to the Hornets’ frustration, the first one rolled off the rim.

But he was able to get the second one to rattle in, making it a three-possession game, for all intents, sealing the victory. Beckner and Allen traded free throws to set the final score.

“We struggled from the free-throw line,” Abrahamson acknowledged. “We got there a lot. That was great but 11 of 20 is not going to win you past today. I’m surprised a little bit that it got us past today. We missed some layups and gave ups some layups. I think that’s the story about why it wasn’t a bigger margin of victory.

“We ran our stuff then we were able to play with the lead and they had to foul us,” he noted. “Our kids are better than that and I think they’ll respond to that.

Van Buren was 0 for 5 from 3-point ranged in the second half. Abrahamson noted the guard play of Allen, Martin, Chumley and Turner.

“To our kids’ credit, they really stepped it up,” he said. “The urgency and contesting shots, being there on the catch against those guys. I thought we left the lane open some and that was disappointing. But we certainly covered the perimeter better. I thought we were able to make their guards a little bit uncomfortable and that was the key.”