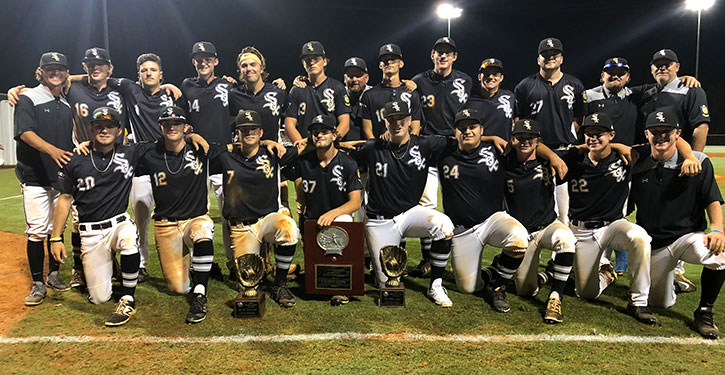 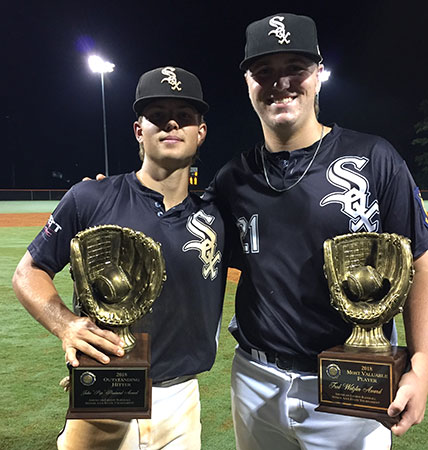 Logan Chambers, left, and Will McEntire.

CONWAY — What are the odds?

A baseball team gets thumped 10-1 in the first game of a double-elimination tournament then reels off six wins in a row to capture the championship.

Somehow, though still a tall order, it’s plausible. It could happen.

The Sox, now 43-9-1 on the season, will represent the state once again at the MidSouth Regional Tournament in New Orleans, starting Aug. 8, with a chance to repeat as champion and return to the American Legion World Series in Shelby, N.C., where they finished in the top four last summer.

Logan Chambers, who homered to start the final game — a run that would’ve actually held up as the game-winner — was named the top hitter of the tournament with Will McEntire, who won two games on the mound for the Sox, was named Most Valuable Player, just eking out teammate Cade Drennan who led the team in hits (12) and RBIs (7).

After Bryant’s opening-day debacle — the 10-1 loss to Fort Smith Sportsman — the team earned run average was 1.67. Over the last five games, the staff ERA was exactly 1.00.

Bryant manager Darren Hurt and his assistants Jerry East, Ozzie Hurt and Dylan Hurt, worked the Sox’ pitching so well, despite the pitch limits, the Sox would’ve had good pitching available even if there had been another game.

“Myers today was really good,” said Hurt. “It kind of goes unnoticed a little bit, what he did in the first game because Scotty was so good in game two. He was commanding every pitch. That’s as good as he’s looked ever as far as I’m concerned. He didn’t strike out 16 (like he did against Benton on July 20) but he was throwing his change-up. He was commanding it. He was getting a lot of groundballs, which kept his pitch count down, which is something he sometimes struggles with.

“The game that he threw and then the rain delay hits and it lasted too long for us to try and go back to him, so Greiner comes in and throws great,” he continued.

Buck threw six shutout innings allowing just three singles with two walks and two strikeouts in the first game on Tuesday, as the Sox forced the “if” game to decide the championship. After a 75-minute delay for lightning and rain, Greiner took over and eased to a 1-2-3 seventh for the save.

It was the only appearance on the mound of the tourney for Greiner, a go-to guy in crunch time all season for the Sox.

Asked if he’d been told at the beginning of the tournament if he would’ve used his closer only one inning while coming back to win the title, Hurt said, “I would’ve told you that you were freakin’ crazy. Because there’s no way. If you would’ve told me I’d only throw Boston twice — I mean, the starters were so good. I can’t say enough about them. They put no stress on our bullpen.

“And having to win six in a row and your bullpen — we could play another game. That’s what’s crazy. I’ve got pitching lined up to go another one if we had to. I didn’t expect that.”

Schmidt blanked Sheridan on five hits over 6 1/3. Sheridan’s fifth hit, a single by Dalton Domrase with one out in the seventh, led to Heil’s entry. A strikeout and a comebacker were all Sheridan could muster against him and the Black Sox got to dogpile as the game concluded.

Sheridan scored just one unearned run in its last three games of the tournament — the one was good enough to beat Fort Smith — after not going back-to-back games in which they scored less than three runs all season.

Offensively, the Sox did just enough. In their improbable six-game run, they only topped double digits in runs scored in one game.

“We didn’t execute,” Hurt said. “We really should’ve put them away in the fourth or fifth inning (of the second game), with so many of those guys on. We’ve just got to do a better job of executing. But we did survive it.”

In the championship game, Chambers slugged the second pitch of the contest from Sheridan starter Haydn Finley over the fence right down the right-field line. It was the lone run of the game for six innings.

Sheridan got two runners aboard in the second, on singles by Dalton Domrase and Nathan Kirkpatrick but, after Devin Koonce’s sacrifice-bunt attempt went foul, the Sox worked a pick-off play at second and Schmidt caught him with a throw to Logan Catton.

After Koonce struck out, Kirkpatrick was thrown out trying to steal by Drennan, the Bryant catcher, as the uprising unraveled.

Singles by Catton and Jake Wright gave the Sox a chance in the third, but Finley and Sheridan escaped.

In the top of the fourth, Buck and Logan Grant each walked. A bunt by Matthew Sandidge was pounced upon by Finley in time for a force at third. Grant was thrown out trying to steal third then Greiner beat out an infield single. Dillon beat a throw to second but was tagged out when he came off the bag without a slide.

“Offensively, we’ve kind of been a little streaky this summer but, for the most part, we’ve had a pretty good offensive summer,” Hurt said. “But those two guys (Chambers and Drennan) have been lights out all summer long.

“Then (Logan) Catton stepping up and doing what he did for us,” he began. “We moved him to the two-hole after we lost, and it wasn’t anything to do with anything other than the fact that his at bats were so good, that we just wanted him to get more of them. He shined up there. I think we’ve got ourselves a new lineup that we’re going to stick with now.

“Offensively, we did just enough,” Hurt concluded. “Sometimes I get upset because it seems like we enjoy playing seven innings. And I’m like, ‘Can we please just jump on somebody and quit leaving the bases loaded three times in a game?’ But, they do enough.”

Schmidt pitched around a lead-off single to Tyler Cleveland in the fourth. He got to third with two out then was stranded as Domrase popped to Catton at second.

In the fifth, Kirkpatrick doubled but never got any further. Schmidt retired seven in a row before giving up the single to Domrase with one out in the ninth and turning it over to Heil.

The Sox got a little insurance in the top of the seventh. Greiner beat out a bunt single then Chambers was struck by a pitch on a 2-2 count.

Austin Wright relieved Finley at that point. But Catton sacrificed then reached when the throw to first by Wright skipped away. Greiner scored on the play. Chambers went to third then scored when Catton left early from first and drew a throw, making it 3-0.

Bryant scored in the first in the opening game of the day. Chambers singled, stole second and took third on a wild pitch. Domrase, the Sheridan starter, retired the next two but, on a 2-2 count, Drennan drilled a single up the middle to make it 1-0.

Montana Korte led off Sheridan’s first with a single but that remained the lone hit for the team for three frames.

In the top of the third, Chambers singled and, with two away, Drennan came through with a single to send Chambers to third. Drennan left early from first and stayed in a rundown until Chambers scored as a throw to second was booted.

The last Sheridan threat was in the bottom of the fifth. With two down, Austin Wright singled then stole second and third as Logan Mitchell drew a walk. That brought up Korte, the Sheridan lead-off man. He grounded out to second.

Bryant tacked on one in the top of the sixth. Grant singled up the middle and Sandidge drew a walk. Dillon got a bunt down and he beat it out, loading the bases. Domrase got Greiner to ground into a doubleplay but Grant scored on the play.

Sheridan was retired in order in the sixth and, after the rain delay, Greiner finished it in the seventh.

August 1 in Bryant athletic history: 2008
Another rout for Sox at 15U Babe Ruth State tourney