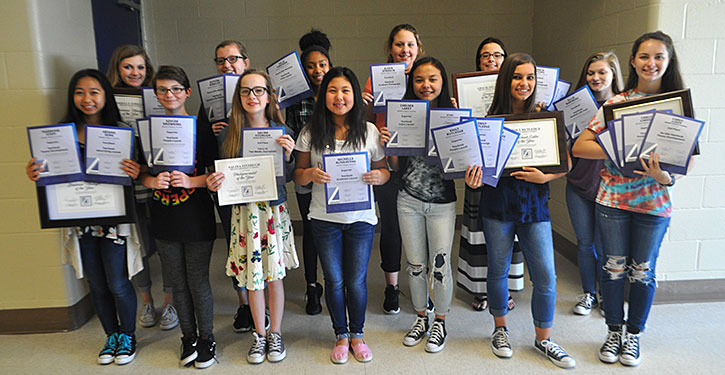 Bryant Middle School’s Sting yearbook staff took home the highest honor awarded by Arkansas Scholastic Press Association. The yearbook from 2016 was entered into General Excellence and was rated Superior.Superior books were then re-judged and the top books were awarded the title of All-Arkansas. This is the first time that BMS has won this title. Hannah Jetton and Sophia Talley were the editors of the 2016 yearbook.

The staff for 2017 also won a collection of individual and group awards for work mailed-in.

The staff also placed in two other mail-in categories. Rutledge, Lidzy and Browning won a Superior in special coverage. The staff as a whole was awarded a Superior for theme development for the 2017 book. Lidzy and Rutledge are the current editors.

Students competed in on-site competitions as well, sitting down to create a product in a timed setting. They are then judged against all grade and experience levels. Lidzy won third place in onsite yearbook theme development and Fitzhugh won third place in carry-in two weeks journalistic.