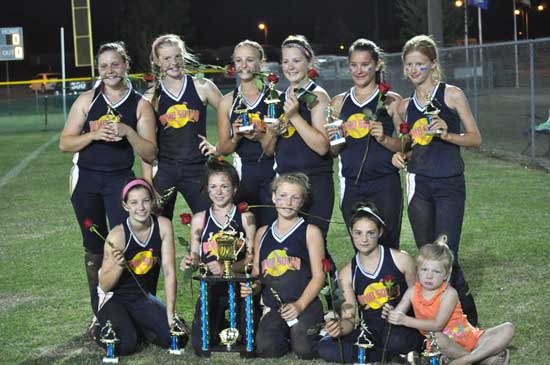 The Bomb Squad 12-and-under softball team, including players from the Bryant area, placed second in the[more] dual-sanctioned USSSA/USFA Mother’s Day Madness tournament on May 7-8 in Olive Branch, Miss. The performance qualified the team for the ESPN Rise World Series in Orlando, Fla.

The Bomb Squad opened pool play with a 7-2 win over the Mississippi Lady Tigers then absorbed a 9-8 loss to Mississippi Extreme. In the double-elimination championship tournament, they started with a 3-0 win over Midsouth Extreme then a 2-0 win over the Arkansas Knockouts. The Squad then got back at Mississippi Extreme with an 11-1 win but then ran into the Mississippi Crush. A tough 7-6 loss sent the Bomb Squad to the losers bracket but they ousted the Arkansas Shock, 4-2, to get another shot at Mississippi Crush in the championship game. But again Crush prevailed, this time, 9-1.