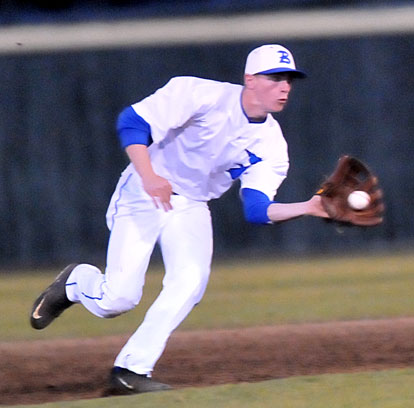 Junior lefty Beaux Bonvillain didn’t quite pitch a perfect game like senior teammate Zach “Panda” Jackson did on Monday night but, like his predecessor, he whipped up a shutout against the Hot Springs Lakeside Rams, scattering four hits, walking just one and hitting a batter. He fanned two and was backed by a strong defensive performance and more productive work at the plate.

For the second night in a row, the Hornets won 10-0 in six innings. This time, senior catcher Dylan Hurt went 4 for 4 with a walk and four runs batted in, including the game-ender. Lead-off man Logan Allen was 2 for 2 with two walks and a sacrifice bunt that was misplayed. Over the two games so far, Allen has reached base in all 10 of his plate appearances. Shortstop Jake East and DH Cameron Coleman also had two hits as Bryant matched its hit total of Monday night with 12.

“Beaux did a great job,” said Hornets coach Kirk Bock. “He pounded the zone. They hit some balls hard, they just hit them right at us. That’s baseball.” 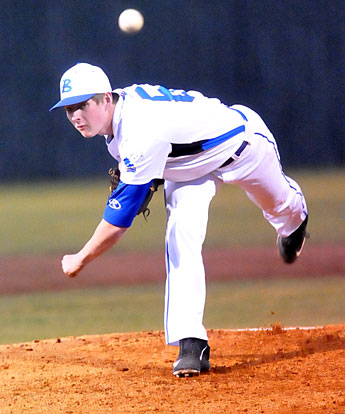 The lefty struck the first batter he faced with the first pitch of the game but, on the very next delivery, dialed up a two-ball with East ranging behind the second base back to field the ball and start it.

In the second, Lakeside’s Colton O’Keefe singled up the middle but, moments later, Erick Aquirre smacked a sinking liner at Seth Tucker at second base. Though Tucker couldn’t snag the knuckling liner, he knocked it down and tossed to East to start the doubleplay.

The next batter, Race Tittle, singled but was stranded.

“Those two doubleplays helped,” Bock emphasized. “Those were big. And that kind of takes the win out of your sails.”

Through two frames, the Hornets had a 3-0 lead. Allen opened the home first with a sharp single to left.

“It’s good to have that guy,” Bock said of Allen. “Right now, he’s setting the tone for us. And if you know that if somebody at the bottom of the order doesn’t get on, he can get on and he can run. That’s something that we’ve had in the past but we hadn’t had that type of consistency. He’s hot right now.”

Hurt walked then Evan Lee pulled a grounder to first, moving the runners up as Tittle, the Lakeside first baseman, stepped on the bag. But he then tried to throw to second to nab courtesy runner Jordan Gentry only to uncork an errant throw. 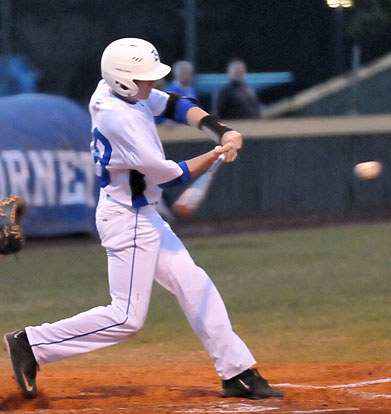 Seth Tucker had an RBI double in a three-run sixth. (Photo by Kevin Nagle)

Garrett Misenheimer, who was on base four times after going 4 for 4 on Monday, drew the first of his three walks. Joey Cates moved up the runners to second and third, setting the stage for a clutch, two-out RBI knock by East.

That was the first of seven two-out run-scoring hits in the game for Bryant. Asked if that was a knack, a mindset or happenstance, Bock said, “I think it’s their mindset that they’re not giving up, that it’s not too late with two outs. One thing is, in the past, we’ve really hit a lot of fly balls with two outs and we’re working hard on not hitting those fly balls. That gives you a chance.”

It happened again in the second inning when, with two down, Allen beat out an infield hit and stole second. On a 2-2 pitch, Hurt cracked a single to left to bring him home. Hurt started to head that way on the late throw toward the plate. But the ball was cut off by third baseman Jon Youngblood and he was tagged out trying to get back to first.

Bonvillain worked a 1-2-3 third then Lakeside’s Brandon Hall started the top of the fourth with a topper to the left side that East appeared to have a bead on as he charged, but the ball took a bad hop off the lip of the infield and got by him for a scratch hit. 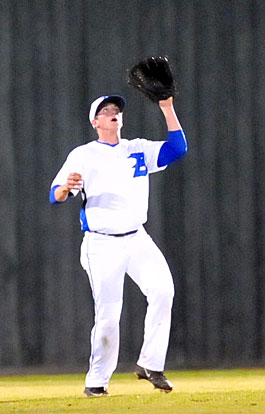 Logan Allen tracks down a ball in center. (Photo by Kevin Nagle)

After recording his first strikeout, Bonvillain issued his lone walk to O’Keefe. But both runners were stranded as he got Aguirre to fly to Joey Cates in right and Tittle lined right at Tucker at second.

The Hornets doubled the 3-0 lead in the fourth. Coleman walked and Aaron Orender was hit by a pitch. Allen got a nice sacrifice bunt down and when Youngblood’s throw to first was wild, Coleman scored and runners wound up at second and third fur Hurt.

On a safety squeeze, Hurt got a perfect bunt down and actually wound up with an RBI single out of it as Youngblood had no play. Noticing that second base was temporary uncovered, Hurt started for second and got in a rundown, staying in it long enough for Allen to score as well.

In the top of the fifth, Bonvillain pitched around a two-out double by Blake Spilker. A nice play by Orender at first on a wide throw retired the next batter, Tanner Rice, to preserve the shutout.

In Bryant’s fifth, Coleman singled with one out and stole second. With two down, Allen worked a walk and, again down to his last strike, Hurt looped a single down the right-field line for a two-out RBI single, making it 7-0.

Bonvillain needed just five pitches to wade through the Rams 2-3-4 hitters in the top of the sixth and, in the home half, the Hornets came up with three to end it. All of those runs scored with two out.

Misenheimer led off the inning with a walk and moved up when Spilker ranged for to his right to rob Cates of a hit. With two down, Tucker fly down the right-field line dropped just inside the foul line for an RBI double. Coleman singled him home then raced to third on a two-bagger, a liner that was misjudged by Jack Barnhoft in left.

Allen kept his on-base streak going with another free pass, which loaded the bases for Hurt. He shot a single through the right side, bringing in Coleman with the final run.

The Hornets will return to action on Friday when they host the El Dorado Wildcats. 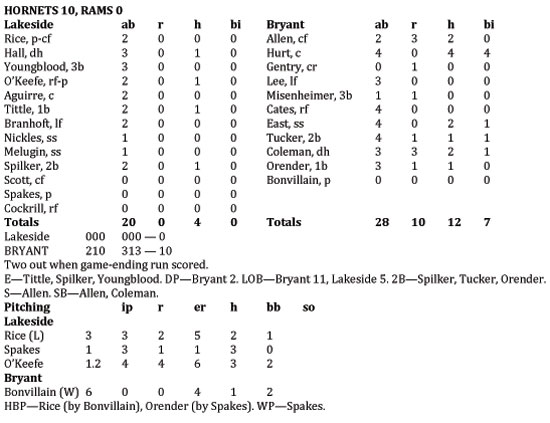