PARAGOULD — The Bryant Lady Hornets soccer team stuck around, overcame the elements and the host team to capture the championship of the abbreviated Paragould Invitational Tournament on Saturday, Feb. 28. 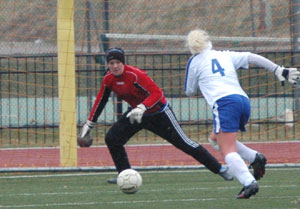 The Lady Hornets, who opened the tournament on Friday with a 3-1 win over Mountain Home, clipped Paragould, 3-0, in a match that ended in sleet and snow on Saturday to capture the title.

The Lady Hornets improved to 3-1 on the season entering their home opener against Van Buren in a 7A-Central Conference game on Tuesday, March 3.

Senior Sarah Manning had two goals and junior Shelby Bryant added her first varsity score in the championship game in which Paragould only managed to attempt one shot on goal that Bryant keeper Megan Childress saved.

“You’re never sure how things are going to go with the host team,” acknowledged Lady Hornets coach Doug Maxwell who was also fighting the effects of the flu. “The weather started out at 32 degrees with a driving rain. We checked the wind right before the game and it was blowing about 20-25 miles per hour and it never let up. It turned to sleet and snow at halftime. Not the ideal conditions.[more] 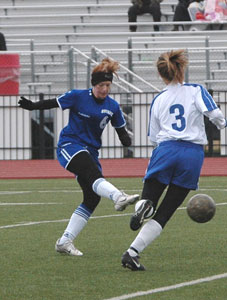 “I thought the girls did a great job,” he added. “I was really proud of the way we played and I’m excited to see it. Early in the season, you kind of wonder if you’re going to be able to put that kind of chemistry together. The team responded well.

“It was good just to get two more games under our belt,” Maxwell continued. “The weather wasn’t ideal but it gave the kids a chance to respond to a situation. It was good to find out exactly how bad they wanted to work to get that win. It was a turf field, a nice flat field to play on, just at 70 yard wide so it was good for us to be able to use the width to our advantage.”

The Lady Hornets wound up attempting 21 shots on goal, 13 corner kicks. Manning scored the lone goal of the first half on a penalty kick about 12 minutes in.

“The first half we were going into the wind but we really limited what (Paragould) was able to do,” Maxwell noted. “Really, we dictated the speed of the game. A lot of shots were coming free from about 22 yards out. They were doing a good job of retreating their defense and packing a lot of people in the box, a lot of times putting seven players in the box and not giving us a lot of space inside. With the wind in our face, we weren’t able to get off many good shots. We were fortunate to get that one shot in on the PK.”

With the wind at their backs in the second half, however, the Lady Hornets were able to launch some shots from further out.

“The snow and sleet were out of our faces,” mentioned Maxwell. “Sarah scored on a shot from about 35 yards out. Just a good clean shot right over the top of the keeper who really wasn’t expecting it. Shelby scored from about 30 yards out. She just broke free. We had a good crossing pass there and broke free in the middle of the field. It was good to see her get her first career goal. We were able to sub quite a bit and get a lot of players in the game in the second half.

“The wind didn’t allow (Paragould) to play any long balls over the top of us and our defense did an outstanding job cutting down any breakaway opportunities that they had through the middle,” he added. “The defense was anchored all weekend by Emily Smith, Sarah Manning, Serenity Gomez and Jessica Baugh.”

Of the Mountain Home game (for details, see the earlier post), Maxwell said, “We found out going into it that they were 5-0 and they’d scored really handily on just about everybody. They were averaging at least three goals a game coming in so holding them to one goal was outstanding. 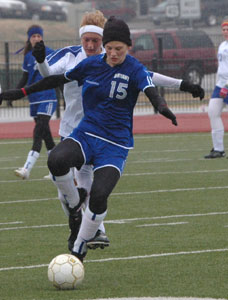 “We were going into the wind in the first half which, for us, wasn’t that big of a deal. We’ve really been working on our passes, keeping them down, playing the feet and really trying to move the ball around and that was the difference for us. We actually out-shot them 9-2 in the first half.

“We did give up one goal in the second half. Megan had four saves and the goal was a breakaway situation. We had a defender in the right spot, just got her feet mixed up and actually fell down. We thought we were going to get back and get a good block on it but their forward got a great crossing shot from the left side and just snuck one in off Megan’s hands. But Megan did an outstanding job for us. 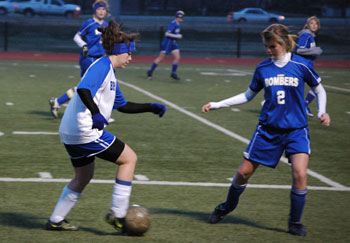 “With the wind, they tried several times to take and play the ball up over the top of us but our defense did a good job of reading the passes and intercepting them, a good job of transitioning and really shut down everything they tried to dribble up to the middle. We were beating them to the ball. At least 80 percent of the time; the girls were just quick on their feet. You could tell the weather was affecting them a lot more than it was us. I was feeling really good about that.”

The Lady Hornets finished with 19 shots on goal to just five for Mountain Home.

Regarding Tuesday’s match with Van Buren, a new member of the

7A-Central Conference, Maxwell stated, “You never know. You hear lots of things about teams the first time you get to play them conference-wise. With them switching into this conference from the West, you don’t really know what to expect out of them.”