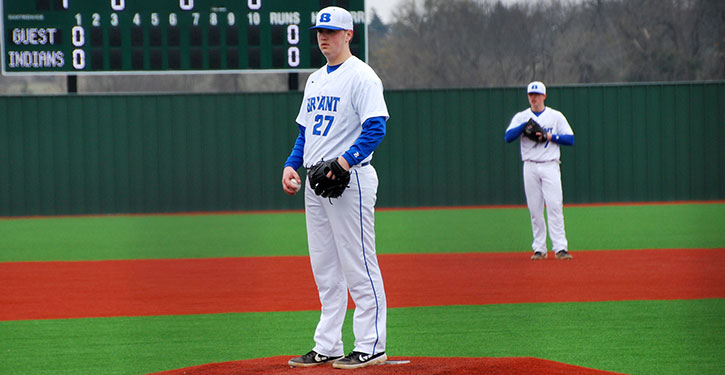 WAXAHACHIE, Texas — Behind three-hit pitching by Will McEntire, Will Hathcote and Coby Greiner, the Bryant Hornets baseball team earned their fifth straight victory to open the 2019 season on Friday at the Dulin Memorial Tournament.

But, later in the day, they absorbed their first loss, 6-0, to the Legacy Broncos of Mansfield, Texas.

The win was a 1-0 decision over the Midlothian Panthers.

Bryant wraps up the trip to Texas on Saturday at 11 a.m., against Birdville, Texas.

In the opener, the Hornets were led by Austin Ledbetter, who went 3 for 3. Logan Grant had two hits and drove in the lone run.

McEntire worked into the fifth allowing all three hits, all singles. He fanned seven and walked three. Hathcote got the final out of the fifth then gave way to Greiner in the seventh, who earned the save.

The only run of the game came in the bottom of the third. Cade Drennan belted a one-out double to right. Ledbetter followed with a lined shot that hit the second-base umpire square in the stomach for a single that had runners at first and third.

Gage Stark, who was serving as a courtesy runner for Drennan, held at third as, with two down, Ledbetter stole second then Grant hit a slow roller to short and legged out an RBI single.

McEntire had worked around a walk and a single with two down in the first. In the second, he struck out the side around a lead-off walk and a one-out knock.

The Hornets threatened in the second when Grant led off with a triple and Noah Davis walked. With one out, Logan Catton was hit by a pitch from Midlothian’s starter Caden Hawkins. But the Panthers’ hurler got Greiner to bounce back to the mound where Hawkins started a 1-2-3 doubleplay.

McEntire retired the side in order in the top of the third before allowing a lead-off single to Jackson Quinn in the fourth. But the Hornets’ senior picked Quinn off first before fanning the next two.

In the top of the fifth, the first two Panthers were set down. McEntire then walked Nathan Humphrey. Up to 78 pitches, McEntire gave way to Hathcote who got Me’Koi Malone to tap out to first.

Hawkins worked around a two-out single by Ledbetter in the bottom of the fifth but Hathcote set down the Panthers in succession in the top of the sixth.

The side-winding Greiner took over on the mound in the seventh, struck out Hunter Harrington, got Chris Tomlinson to bounce out to Catton at third. In a battle with Josh Oliver, the count went to 1-2. Oliver fouled off a pair of pitches then took ball two. Greiner then crossed him up by throwing overhand for strike three on a feeble swing to end the game.

In the loss to Legacy, the Hornets were limited to just two hits by 6’4” freshman Kayden Voelkel with two innings of relief from senior Payton Cathey.

Actually, Bryant threatened against Cathey but couldn’t get the big hit needed. Trailing 4-0 in the bottom of the sixth, the Hornets loaded the bases when Ledbetter and Wright drew walks and, with two down, Peyton Dillon beat out an infield hit.

But a strikeout got Cathey and the Broncos out of the jam.

The Mansfield team tacked on a pair of runs in the top of the seventh then Bryant’s Logan Chambers and Drennan were hit by pitches with one out in the home half. But Cathey induced a foul pop for the second out and a fly to right to end the game.

Texas Tech signee Nate Rombach had two hits for the Broncos, who improved to 7-0 on the season. Voelkel helped himself with a pair of knocks while Nathan Rooney picked up a pair.

Bryant head coach Travis Queck got four pitchers into the game. Grant started and went three innings allowing four runs but only one earned. He fanned five without a walk.

Hathcote came back to pitch three scoreless innings in relief then Slade Renfrow and Zion Collins pitched in the seventh.

The Broncos grabbed a 3-0 lead in the first. Rooney and Rombach singled with one out. Grant came back to strike out clean-up hitter Nate Price. Cameron Clark shot a single to right to plate Rooney. Rombach, who had stolen second, scored when the ball was misplayed in right. Clark followed on a second error on a throw to the plate.

Grant settled in and worked around a one-out single by Voelkel in the second and a hit batsman with two out in the third.

In the fourth, however, Boone Gilbreath led off with a double and took third as a sacrifice bunt from Raef Wright was misplayed. Voelkel lined a single to left to make it 4-0.

Hathcote relieved at that point and prevented further damage with a strikeout, a line out to Greiner in center and a pop to Chambers at short.

In Bryant’s fourth, Jake Wright belted a one-out triple to center, breaking up a no-hitter. With two down, Davis drew a walk, but both were stranded as Voelkel escaped with a strikeout.

After Hathcote pitched around a single by Rombach and an error, finishing the inning by picking off the trail runner, the Hornets could only muster a two-out walk by Chambers. Drennan made a bid for a hit but his liner was snagged at short.

The Hornets turned a doubleplay to erase a lead-off single by Raef Wright in the top of the sixth before the frustrations of the sixth and seventh.

In Mansfield’s seventh, a walk, an infield hit and a two-out hit batsman filled the sacks. Another walk forced in a run. Collins relieved and induced a groundball but it was misplayed allowing another run to score.