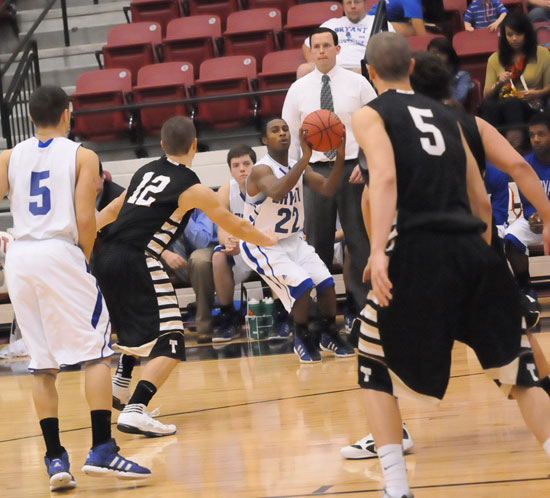 CABOT — Just days after the announcement that the 60-year-old gymnasium at[more] Fayetteville High School was set for demolition to make way for a new facility, a Bryant Hornets basketball team won a State Tournament game for the first time since the 1987 State tourney, played in that old gym.

As goes the gym, so goes Bryant’s years of frustration. 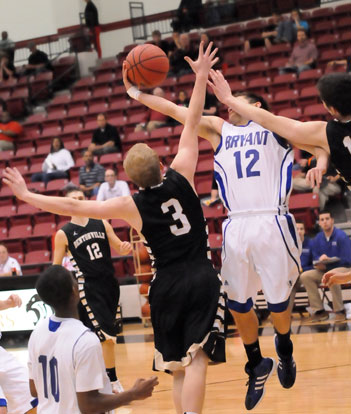 During the regular season, the Hornets had shown a knack for coming from behind, most notably after being 16 points down in the second half at Conway. So, on Wednesday night in the first round of the Class 7A State Tournament in the spanking new Panther Arena at Cabot High School, when the Hornets found themselves trailing by 9 to the Bentonville Tigers at the start of the fourth quarter, there was no panic.

There was, however, a withering, hustling press, which sparked a 12-0 run, which produced a 40-36 lead. Bentonville rallied to tie it and the game went to overtime.

After converting just 10 of 20 free throws in regulation — including just 3 of 9 in the fourth quarter — Bryant knocked down all 10 attempts from the line in overtime to secure a 55-50 win over the Tigers.

Marcus Wilson drained a crucial 3-pointer then Brantley Cozart, Zach Cambron and Jordan Griffin made the free throws. In addition, sophomore Greyson Giles, seeing his most extensive playing time of the season, came through with a tremendous defensive play to help turn back the Tigers.

Of course, the current Hornets weren’t even born in 1987 and head coach Mike Abrahamson is only in his second season at the school. So they don’t own that legacy. Their legacy is now secured. 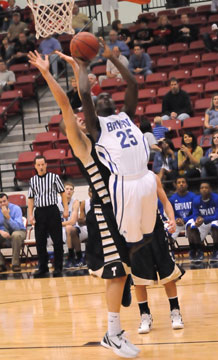 “It’s monumental and I realize that,” he continued, “but, at the same time, I want even more than this. I want to be a perennial contender. Yes, I understand the magnitude and I appreciate and my players understand it. We talk about it. It’s a monumental step but, I’ve got to be honest and say, we want more. We want to be in the running for State championships and we want to make this a normal occurrence.

“It is a step,” the coach emphasized. “Getting to the State tournament was a step and winning a game is a step. We want to take another step. We want to win another one. I don’t, by any means, feel satisfied. We’re going to go out and try to win (Thursday) and we can sit and reflect more when it’s over. We don’t want it to be over (Thursday).”

Through three quarters, the Hornets had been frustrated by Bentonville’s 3-2 zone with run-and-jump traps. Though they only had 11 turnovers in the game, they managed just seven field goals in the first three periods.

They doubled that in the fourth quarter while, unleashing full-court pressure, they held the Tigers to just one field goal.

“Once again, we didn’t have a choice,” Abrahamson said of the press. “We had to get something going. We had to score points. I felt like we weren’t getting bad looks. We weren’t running bad stuff. We just couldn’t put it in the hole. The good thing is, these players have seen this act before and they never quit believing that we could get back in it and never quit believing that we could win the game. Give them credit once again. It’s taken years off my life but I appreciate the win.

Bentonville got it to overtime, however, by converting 7 of 11 free throws in the final period.

Bryant’s comeback began with Cambron, in for the foul-saddled Quinton Motto, scored off the offensive glass in the opening seconds of the fourth quarter. Griffin and Anthony Black combined to force a turnover and Giles hit the offensive boards for a bucket that had the Hornets within 33-28. 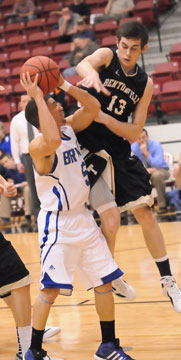 A free throw by Tigers’ point guard Austin Haggard and couple of them by 6-8 forward Nick Smith bumped the margin back to 8.

But that’s when the Hornets’ blitz began in earnest. After an exchange of turnovers, Giles hit a layup off a sparkling feed from Cozart. Griffin made a steal but missed under duress. Black, however, hustled after the rebound and got the ball to Cozart for a triple that cut the lead in half, to 36-33.

Smith, who led all scorers with 17 points, missed and the Hornets were headed the other way. Black misfired but there was Giles to grab the carom as he was fouled.

As the 6-7 Motto returned, Giles converted one of his tosses to make it a 2-point game. Smith missed again as Motto hounded him and, on the run, Griffin canned a driving jump to tie it.

The Hornets forced another turnover and Bentonville took a timeout to regroup. But when play resumed, the Hornets worked a play for an alley-oop to Motto. The pass was high and Motto made an eye-popping play just to control it. He made a move and shot only to miss but when back and got the rebound, scored and was fouled. Though he couldn’t get the subsequent free throw to fall, the Hornets had their first lead since late in the first half.

Another theft by Griffin led to a basket by Black and a 4-point lead.

But Smith countered with a three-point play as Motto fouled out with 3:50 to go. Still, leading by a point, the Hornets spread the floor and chewed up some time before Cozart was fouled with 2:09 left. He converted twice to make it 42-39.

Black and Giles forced a turnover with Giles heading the other way for a layup. Bentonville’s Corbin Copeland hustled back and, from behind, slapped Giles’ layup off the backboard. Despite calls from the Bryant bench for goal-tending, the play stood and Copeland, having collected the carom, was fouled.
He made one shot to make it 42-40. 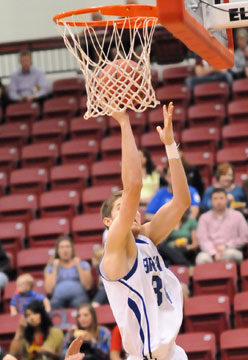 It stayed that way as both teams missed opportunities to change it. The Hornets came up empty on four free-throw attempts before Copeland, with :56.8 showing, tied it with a pair from the line.

The Hornets held for a last shot and they wanted to get the ball to Cozart but the Tigers’ defended the play well and Black wound up having to force a long 3 that fell harmlessly as the game went to overtime.

On free throws by Haggard and Copeland, the Tigers inched ahead, 45-42. The Hornets then got their first points of the overtime with 2:34 left, when Wilson drained a 3 from the left corner to tie it.

A free throw by Smith was countered by two from Cozart that gave the Hornets a 47-46 lead with 1:38 left.

Haggard’s reverse layup put Bentonville back on top and Bryant called timeout with 1:05 left in the extra stanza. On the subsequent inbounds play, Cambron was fouled. Though he had missed a pair late in regulation, the junior stepped up and buried both shots and Bryant was on top, as it turned out, to stay.

Cambron followed up with a crucial defensive play, taking a charge on a shot by Smith. Not only did it return possession to the Hornets, it was Smith’s fifth foul.

Bryant worked the clock to :41.2 before Griffin was fouled. He started his string of six in a row at that point. Trailing 51-48, Bentonville called timeout to set up a play, hoping to get an open 3. When play resumed, the Tigers set a screen off the ball to get a 3-point look on the left sideline but Giles broke through the screen, tipped the ball into the air, went up and grabbed it, came down just inside the boundary and flipped the ball ahead to Griffin who was fouled with :18.1 showing.
Griffin made it a two-possession game with both free throws. 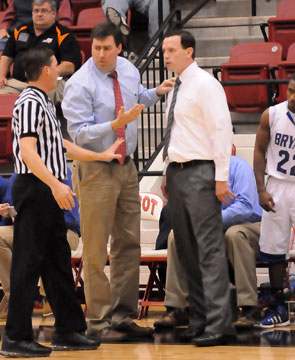 “Huge play to get that steal,” Abrahamson said of Giles. “They sent those players to that corner and he knew that he had corner-to-corner responsibility and, to his credit, he saw that play coming. He saw it before it happened and was able to get up there and make a huge play.

“Greyson’s a good player and we’ve been waiting for him to come out of it,” the coach commented. “He started playing the second round of the conference schedule. He’s given us some good minutes but, tonight, was really a major help for us, just being aggressive and being a threat. Making that steal and hitting a couple of baskets, hitting a free throw and getting some rebounds — it really helped us out because we’re so small with the people that are out there on the court. We’ve got some younger ones that are bigger like Greyson, that we’re trying to develop. To have someone like him, at 6-2, come out and play well is huge for us.”

Bentonville’s Austin Heard was fouled on a 3-point try with :05.7 to go and converted twice to cut the lead to 3 but Griffin iced it away a second later.

Bryant led throughout the first quarter. Black hit a two free throws to make it 7-4 then beat the buzzer on a driving bank-shot to make it a 5-point lead going into the second quarter.

All eight of Bentonville’s shot attempts in the second quarter came from 3-point range and they connected four times. Ironically, they couldn’t find the range again the rest of the game.

Smith hit one to give the Tigers their first lead at 10-9. Black answered with a triple. Heard drained one from long range but then Cozart came through with an old-fashioned three-point play that had Bryant up 15-13 with 2:23 left in the half.

David Frost tied it with a pair of free throws and it stayed that way until Heard beat the buzzer with a 3 to give his team an 18-15 lead at the half.