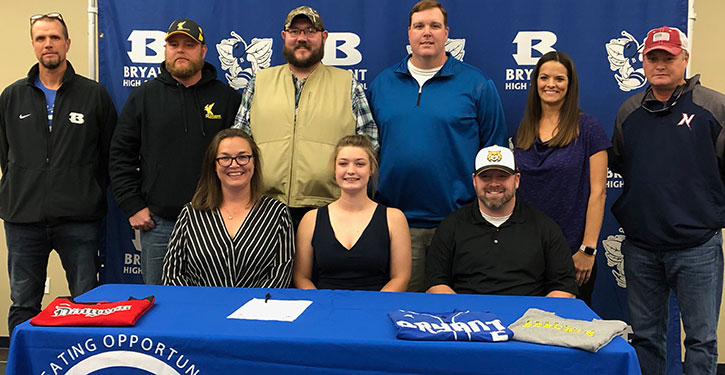 Aly Bowers is the kind of player that’s easy to root for. Going into her senior season on the Bryant Lady Hornets softball team, she’s kind of been blocked by other talented players in the starting line-up. So, her playing time hasn’t been what she might’ve hoped for.

But she’s remained steadfast and positive. She’s continued to work hard to get better and persevered. She’s been a great teammate.

Now, as a senior, Bowers will be counted on to start and be a big factor in the success of the Lady Hornets.

“From everything I’ve seen she will be,” said Lady Hornets head coach Lisa Dreher.

“I’m very excited for the season,” she said. “I feel like, even though we lost a lot of our starting players last year, we’re still going to be very solid this year. We’ve got a lot of good people coming up.”

In the summer, Bowers has already been a key player for, most recently, the Arkansas Diggers. That’s where she caught the eye of Marty Slover, the softball coach at Fontier Community College in Fairfield, Ill.

“My summer coach Claude Hankins reached out to him, talking good things about me,” Bowers recalls. “Then we started communicating through e-mail. I visited, and I loved the school.”

It went so well, in fact, that on Tuesday, Bowers, the daughter of Katie and J.T. Gresham, signed a letter of intent to continue her softball and academic career at FCC for Slover’s Bobcats.

“They actually have a good graphic design program, which is what I want to go into,” Bowers said, “and they just revamped it, put a bunch of money into it. When I went, I got to meet the teacher and talk to her. So that was really cool.”

Ask about their plans for her at Frontier, Bowers related, “I’m going to be playing mostly outfield. He said that, since I’m versatile, I could move around, into the infield a little bit and that I’m probably going to be hitting in the middle of the lineup.”

“I would describe Aly as a team player,” Dreher said. “She’s been willing every season to do whatever to help us win, infield, outfield, pinch-hitting. She’s a good little outfielder. I think she’ll fit in right or even centerfield (for Bryant this year).”

“I really like to play outfield, primarily; left field, preferably,” she mentioned. “I really like that it’s not something every single – I don’t get a ball every single pitch, but it’s very mental. There’s always somewhere I need to be. I’m either needing to back up third or back up the person next to me because they got a ball.”

But it’s her improved hitting that has caught her coach’s eye in preparation for the 2019 season.

“Aly is swinging the bat very well,” Dreher asserted. “She’s one of our top hitters right now. She came back all new, hitting the ball extremely hard. I really trust that that’s going to continue on into the season and just get better, because she’s putting in the work. She’s determined. She’s coachable.

“She’s always been coachable,” she added. “She’s not satisfied right now where she is. She’s already hitting it well.”

Bowers related, “I’ve never been one for not wanting to swing on the first pitch. I’ve always gone in looking at, if it’s a strike, I’m going to hit it. I usually like to look for an outside-middle pitch.”

Unlike so many softball players, who start very young, Bowers got into it around the age of 9.

“I loved it from the very beginning but, about when I started playing tournament ball — I was like 14 — that’s when it started getting serious and I realized that this was something that I could, you know, carry on for college.”

“Honestly, I can never remember Aly saying a negative thing or having a negative reaction to anything we’ve asked her to do,” said Dreher. “And I think her teammates agree with me. She’s just a good teammate. She doesn’t cause problems. She’s hard-working.

“This year, I don’t know what or where but we’re going to find a place for her,” she concluded. “And I know she can do what it takes to play at the next level.”