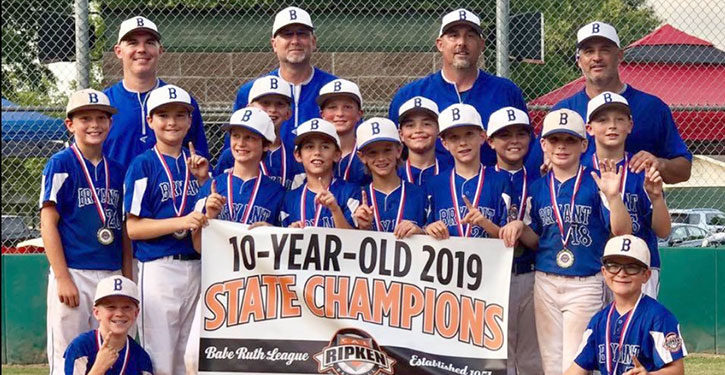 LONOKE — After three innings, the Bryant All-Stars were clinging to a 4-3 lead over the El Dorado All-Stars at the 2019 Babe Ruth 10U State championship game on Tuesday night. But Bryant kept scoring and the El Dorado Drillers did not as Blake Brower, with relief help from Gunner Frazier, settled in and shut them out the rest of the game.

Bryant surged to a 14-3 victory to capture the championship. Next stop, the Southwest Regional Tournament in Seminole, Texas, starting July 11.

Bryant built and 8-3 lead going into the sixth when a six-run explosion took all the mystery out of the result.

Riggs walked to start the game, stole second and third then scored on Markham’s double. El Dorado, however, struck for two in the bottom of the inning to take an early lead. After a pair of singles, Brower and his teammates retired the next two. But a pair of two-out knocks produced the runs before Brower got a strikeout to end the inning.

Bryant regained the upper hand in the top of the second. Hastings walked and, after he moved to second on a passed ball, went to third on a bunt single by Tate-Lee. The duo worked a double steal then Frazier picked up an RBI when he grounded out to third, making it 3-2.

El Dorado went in order in the bottom of the inning and the Bryant scoring continued in the top of the third. Markham was drilled by a 2-1 pitch and, though he was forced at second on a grounder to short by Elliott, Brower was plunked as well, setting the stage for Hatman’s RBI single.

El Dorado kept it close in the bottom of the third. A double and a pair of singles plated a run. A two-out walk loaded the bases but Brower, again, ended the uprising with a strikeout.

Walks to Frazier and Chalmers started the fourth. As Trusty was waiting out a free pass, twice pitches got past the El Dorado catcher allowing Frazier to score. Duran, running for Chalmers wound up at third.

After a pitching change, Trusty was thrown out trying to steal second, but Duran took advantage and stole home to make it 6-3 before Riggs singled to left.

Brower allowed a one-out single and a walk in the bottom of the fourth. He then forced the Drillers to strand two with a strikeout and a pop to Riggs at short.

And Bryant continued its offensive onslaught in the top of the fifth. Hatman walked, Hastings singled and, with one out, Frazier walked to load the bases. With two down, Dozier delivered a clutch two-out double and it was 8-3.

In the bottom of the fifth, a one-out single was erased when the batter was thrown out by Hatman from centerfield when he tried to stretch it into a double. But consecutive singles followed, and Frazier came on in relief. Though he issued a walk to fill the sacks, he then induced a grounder to Chalmers at third for the final out.

Bryant’s blow-out sixth started with a double by Elliott. He scored on Brower’s single to right. With one out, Hastings and Tate-Lee singled to fill the bags for Frazier, who delivered two runs with a double. Chalmers’ two-run single made it 13-3 then Riggs and Markham each cracked singles to bring Chalmers around with the win-capping run.

In the bottom of the inning, Frazier fanned two around a walk to close out the victory and the championship.