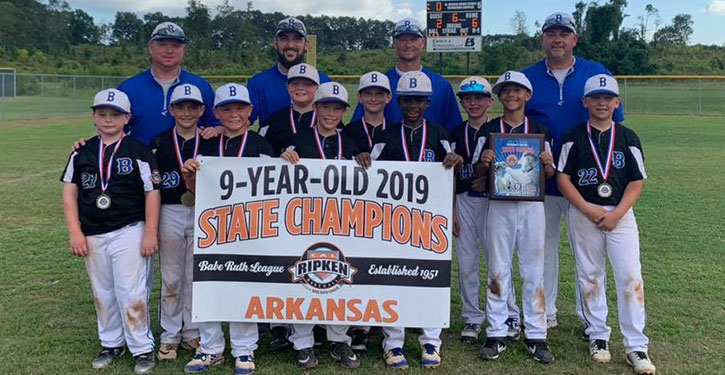 EL DORADO — With a 6-2 win over the Arkadelphia All-Stars on Monday, the Bryant All-Stars captured the 2019 Cal Ripken 9U State championship.

Bryant got to the finals with a 4-0 win over Lakewood that was abbreviated by rain and tragedy. On Saturday, Bryant defeated Benton 8-5. Friday, they opened the tournament with a 9-2 win over Sylvan Hills.

They will advance to the Southwest Regionals, which will be held in D’Iberville, Miss., starting July 10.

The semifinal game on Sunday against Lakewood was interrupted by rain and was suspended. However, on the trip home, a traffic accident cost the life of the father of one of the Lakewood players who was also hospitalized with his injuries. Understandably, Lakewood’s team chose not to return to complete the game.

Drake and Hunter each had two hits for Bryant while Simmons shut out Arkadelphia through three innings and Dunn for two more before they scratched out their two runs in the top of the sixth.

Arkadelphia loaded the bases on a pair of walks and a hit batsman in the top of the first, but Simmons ended the threat with a strikeout.

In the bottom of the inning, Kelley led off with a single. With one out, he was forced at second on Markham’s grounder. Thomason drew a walk to keep the inning going and Drake drilled an RBI double for the first run. Hunter’s base hit drove home two to make it 3-0.

Arkadelphia managed a pair of one-out singles in the top of the second, but Simmons fanned the next two to preserve the shutout.

Dunn opened the home half of the inning with an infield hit. Hyder sacrificed him to second then Simmons beat out a bunt for a hit. A walk to Kelley loaded the bases for Hill, who grounded into a force at second as Dunn scored to make it 4-0.

In the bottom of the third, Drake and Hunter led off with singles. With one out, Dunn moved them to second and third with a grounder to first. Drake scored on a wild pitch and Hunter crossed the plate on Hyder’s infield hit to make it 6-0.

Dunn took over on the mound in the top of the fourth and worked around a pair of walks and a single. In the fifth, he retired the side around a two-out error. A single, a double and a sacrifice fly produced the two runs in the top of the sixth. Arkadelphia had runners at second and third when the final out was made.

Bryant scored four runs in the first inning then retired Lakewood despite a pair of walks in the bottom of the inning before the storms erupted.

In the first Markham doubled in a run, Drake singled him in then scored on Hunter’s double. Brown reached on an error and Hunter scored on a wild pitch.

Bryant built a 7-1 lead then held off a late rally by their rivals from Benton. Kelley and Brown each had two hits as Bryant took advantage of six walks and four errors.

Hunter, Brown and Kelley worked on the mound for Bryant.

In the top of the first, Kelley singled, and Hill walked. A walk to Markham loaded the bases. Kelley scored on a passed ball and when Markham stole third, a pickoff throw to third went awry allowing Hill and Markham to score.

In the bottom of the first, a single and an outfield error produced Benton’s first run.

In turn, Bryant added to its lead in the top of the second. Dunn walked and Hyder’s sacrifice bunt drew a wild throw to first that allowed Dunn to sprint home from first. Hyder wound up at third. After Simmons walked, he and Hyder worked a double steal to make it 5-1. Kelley followed with an RBI double.

After Hill reached on a swinging bunt, Thomason got the seventh run in on a groundout to second.

Hunter struck out the side around a two-out hit batsman in the bottom of the second. He then worked a 1-2-3 third.

In the top of the fourth, Bryant put together a two-out rally. Markham walked, Thomason and Drake reached on Benton miscues then Hunter singled to make it 8-1.

Benton got that run back in the bottom of the fourth on an error, a pair of wild pitches and a groundout.

Brown pitched around a one-out walk in the fifth then, in the bottom of the sixth, a single, an error and a walk loaded the bases. Kelley came on to relieve and surrendered a two-run single. With one out, an infield hit made it 8-5 before Bryant turned an unusual doubleplay to end the game.

On a comebacker to Kelley, he threw to third for a force. Markham relayed to first but not in time. Trying to get to third, the runner from first rounded second and headed that way only to be thrown out by Hunter from first.

A six-run second broke open a 2-1 game in the opener. Dunn, Hyder and Kelley pitched for Bryant and Kelley had two hits and drove in a pair. Hill knocked in three.

Sylvan Hills took a 1-0 lead in the top of the first on an error and a pair of singles. With runners at second and third, Dunn got the second out on strikes then ended the threat by inducing a liner that was caught at first by Brown.

In the home half, Kelley drew a lead-off walk and advanced to third on a pair of passed balls. Hill singled him in. Hill stole second and third then scored on a wild pitch to make it 2-1.

Dunn surrendered a double to start the top of the second, but the batter was thrown out by Hyder from left when he tried to stretch it to a triple. Dunn fanned the next two.

Bryant’s game-breaking uprising began with a walk to Hunter. Brown lined a single to center and Dunn reached on an infield hit. A wild pitch got Hunter home as Hyder walked. Another wild pitch allowed Brown to score.

After a pitching change, Simmons drew a walk to fill the sacks again for Kelley, who delivered two runs with a double to left. Simmons scored on Hill’s groundout then Markham singled in Kelley to make it 8-1.

Sylvan Hills used a walk, an error and a single to scratch out its second run in the top of the fourth. Bryant made it a run-rule win in the fifth when Kelley singled, reached third on a throwing error and scored when Hill’s grounder was thrown away. 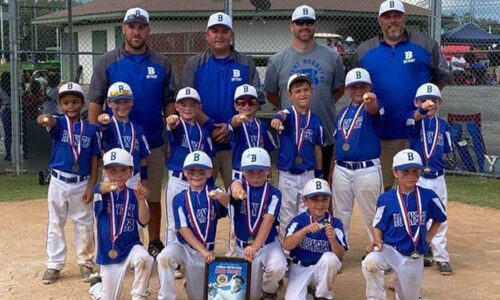 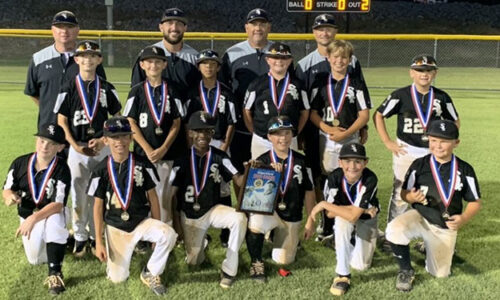