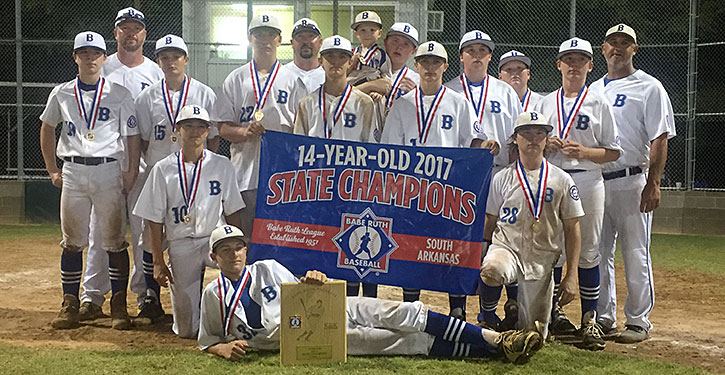 Bryant 14s continue dominance all the way to the State championship 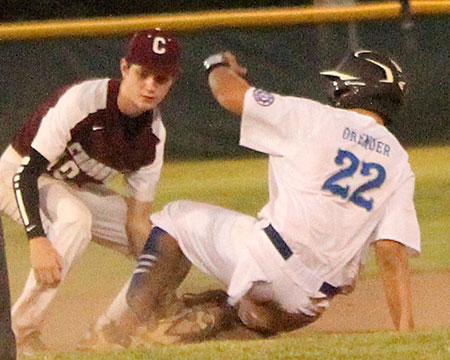 LONOKE — The first time through, when the Crossett All-Stars met up with the Bryant All-Stars in the winners’ bracket final of the South Arkansas 14-year-old Babe Ruth State Tournament, it wasn’t close.

On the second time through, when the two teams met again in the championship round, Crossett, which battled back through the losers’ bracket, kept it close for a little while before Bryant erupted for 10 runs in the last two innings. And, in the end, it wasn’t close again.

With a 14-3 win, the Bryant All-Stars captured the State championship, finishing off an unbeaten run through the tournament and qualifying for Southwest Regional action in Plainview, Texas, starting July 21. 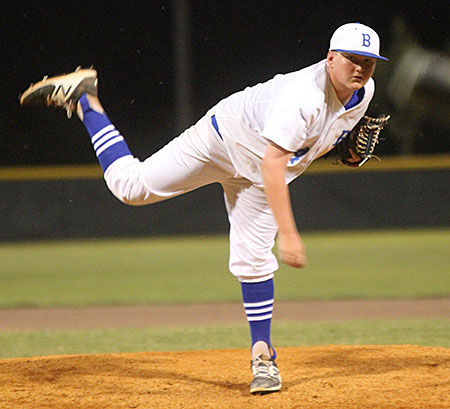 In the title game, Turner shut out Crossett for five innings as Bryant built a 4-0 lead. Crossett scored in the bottom of the sixth but that came after Bryant had erupted for six runs to make it 10-0. Four more scored in the top of the seventh to make 14-1. Crossett trimmed two runs off the final margin in the home seventh.

Turner wound up going six innings, allowing a run on five hits with two walks and three strikeouts while his teammates played error-free defense. Clay finished up, pitching the seventh. 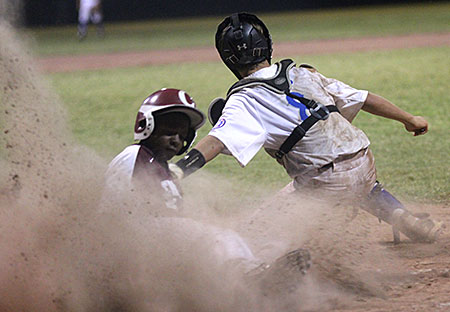 Offensively, Bryant racked up 15 hits including two each by Riggs, Clay, Hathcote, Speer, Sears and Orender. Riggs, Clay and Speer each drove in three runs. Orender knocked in two.

Bryant took a 1-0 lead in the top of the first. Davis walked and took second on Riggs’ groundout. Clay lined a single past the third baseman to chase Davis home.

Turner surrendered a double and a single to start the home first but proceeded to retire the next three.

Neither team made much noise in the second or the third. In the top of the fourth, however, Hathcote smacked a lead-off double to left. He advanced to third on a passed ball and scored on Speer’s sacrifice fly to left.

Turner was then struck by a pitch and Sears ripped a double to right. With runners at second and third, Orender smacked a two-run double to make it 4-0.

Crossett was retired in order in the bottom of the inning; in the fifth as well.

Bryant’s game-breaking sixth began with Turner getting plunked again. Sears beat out an infield hit then Orender walked to load the bases. Crossett retired the next two but Riggs came through in the clutch with a two-run single to center. Clay followed with a two-run double to make it 8-0.

After Hathcote drew a free pass, Speer burned the centerfielder for a triple that drove in two more as Bryant hit double digits again.

In the bottom of the sixth, a hit batsman and a walk started the inning. The next batter bounced to Clay at short for a force at second. The run scored moments later, however, on a sacrifice fly.

In the seventh, McDonald singled to center, advanced to second on a balk and scored on a base hit up the middle by Bates. Thomisee was struck by a delivery then so was Davis, loading the bases again. Riggs singled in a run and, with one out, Hathcote picked up an RBI with a walk that forced in a run.

Speer bounced into a fielder’s choice at Davis was thrown out at the plate but Turner lined single to left got Riggs home with the 14th run.