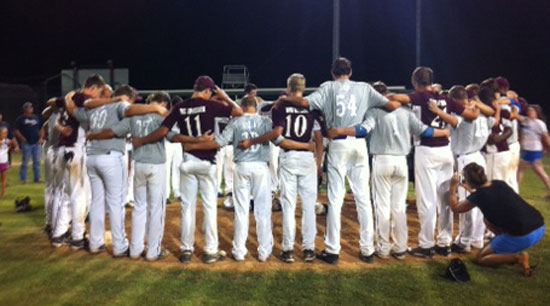 After capturing the 2012 Babe Ruth World Series championship for 13-year-old teams last[more] year, the Bryant All-Stars (most of whom were on that team) are headed back to the World Series as 14-year-olds after Dylan Hurt and Alex Shurtleff combined on a five-hit shutout against the Siloam Springs All-Stars on Monday evening.

Bryant secured the Southwest Regional Tournament championship with the 7-0 victory. The team will be headed to Moses Lake, Wash., for the Series, starting Wednesday, Aug. 17.

The Regional came down to the two Arkansas teams, battling far from home.

Shurtleff retired six of the seven batters he faced over the last two frames. Hurt pitched the first five, finishing strong after working in and out of trouble in the first could of frames.

In the bottom of the first, an error and a single had Siloam Springs threatening. But Misenheimer, the Bryant catcher, threw out the trail runner as he tried to steal second. A pitch later, however, a single put runners a the corners. Hurt, however, set down the next two on a pop to East at short and a fly to Kelly in right.

Bryant responded by taking a 2-0 lead in the top of the second. Misenheimer reached on an error but was forced out at second on a grounder by Hurt. A double by Kelly broke the ice. Coleman delivered a sacrifice fly to make it 1-0. Moments later, Kelly walked home on a balk.

A walk started the Siloam Springs second but Hurt made a nice play on a sacrifice bunt attempt and threw to second in time for the force. A single to right put runners at first and third but Bryant turned a doubleplay — Hastings at second to East at short to Orender at first — to disarm the threat.

In the bottom of the third, a one-out single and a two-out hit had Siloam threatening again but Hurt picked off the runner at second to end the inning.

He would pitched a 3-up, 3-down fourth then work around a lead-off single in the fifth.

Bryant added a run to the slim 2-0 lead in the top of the fourth when Shurtleff and Misenheimer belted back-to-back doubles.

It stayed 3-0 until the top of the seventh when Bryant put together a game-clinching four-run burst. It began with a walk to Kelly. Coleman singled then a passed ball moved them to second and third. Allen drew a free pass to load the bases then Hastings got a squeeze bunt down so well, it went for a hit to keep the bags full.

A one-out walk to Orender forced in another tally then Shurtleff was hit by a pitch to force in another. Misenheimer then capped off the inning with his sacrifice fly.

Shurtleff, who had pitched a 1-2-3 sixth, surrendered a one-out walk in the home seventh but a strikeout and a tap in front of the plate followed, closing out the game.

Road to State title repeat gets steeper for Senior Sox after loss to Texarkana
Taste of Bryant 2013: Kickin’ It At Bishop