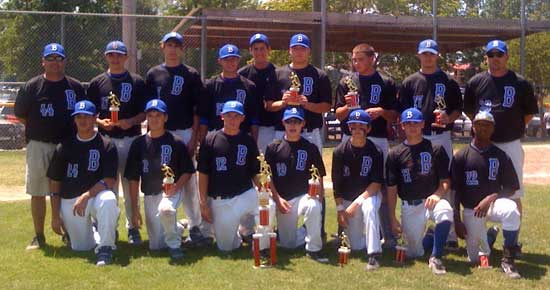 CABOT — For awhile, it looked like the unearned run that the Camden 15-year-old All-Stars scored in the first inning might be enough to upset the Bryant Stars in Sunday’s championship round of the Panther Summer Classic.

The Bryant duo of Tyler Nelson and Hayden Daniel didn’t allow another run the rest of the game and Camden pitcher Logan Peterson kept it 1-0 until Bryant broke through for three runs in the fourth on the way to capturing the tourney title by that 3-1 score.

Daniel contributed a two-run double that gave Bryant the lead in the fourth then Nelson got a bunt down on a squeeze play to produce the third run.

Peterson started the bottom of the first with a double. He was sacrificed to third and scored on an error.

Nelson then struck out the next two batters and worked around a two-out walk in the second.

Daniel took over in the third and allowed just three base-runners the rest of the game, striking out five. The only hit Camden mustered after Peterson’s opening double was a two-out single that followed a walk in the third. A double steal put runners at second and third but Daniel ended the threat with a strikeout, which started a stretch in which he retired seven in a row before issuing a walk to lead off the sixth.

Bryant got a force at second after the walk and when the runner was cited for interference, it turned into a doubleplay.

Daniel then retired the last four batters to nail down the victory.

In the second, Green singled, Schalchlin walked and both advanced on a passed ball. But, with runners at second and third, Peterson struck out three in a row to escape with the 1-0 lead intact.

He worked a 1-2-3 third but, in the fourth, Davis drew a lead-off walk on a 3-2 pitch. Cambron did likewise then Sears came up to sacrifice and got down a bunt that was good enough for him to beat out for a hit to load the bases.

That brought up Daniel who took a strike then pulled a shot into the left-field corner for a two-run double. Sears then came home on Nelson’s bunt. Daniel would try to score on a short passed ball but was thrown out as the Camden catcher got the ball to his pitcher in time for the tag.

Wilson walked but a groundout to second ended the inning.

The damage, however, had been done as Daniel finished it out. Peterson didn’t allow much more either. Jackson belted a two-out double in the fifth but was stranded. Castleberry drew a walk to lead off the sixth but was picked off.

Playing the Classic served as a tune-up for District Tournament play for Bryant. District is set to begin on Friday, July 2, at White Hall. Bryant is set to play the host team at 8 p.m.