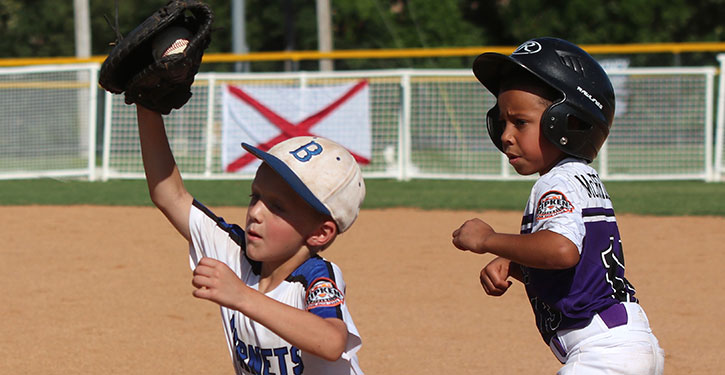 SHERWOOD — The Bryant All-Stars won one and lost one as they opened pool play at the Babe Ruth 6U Southwest Regional T-Ball Tournament today.

To start, the Bryant team ran into Westside Alabama of Mobile and absorbed a 17-5 loss. But they bounced back to beat Lonoke 14-5. They’ll complete pool play on Friday at 1 p.m., against Sylvan Hills.

Bryant scored the maximum limit of six runs in both the first inning and the fourth. Lonoke scored in each of the four innings but never more than two runs.

Smith and Clegg each had three hits in the game.

The opening salvo commenced when Smith, Drake and Bohanna belting consecutive doubles. Clegg followed with a triple then scored on a single by Orender. Doubles by Billins and Danley made it 6-0 and Lonoke was never able to record an out.

Lonoke used a single and a triple to score its first run in the bottom of the first but that’s all they could get.

In the second, Lonoke scored on a double and a two-out single to make it 6-2.

Bryant got two in the top of the third. Smith singled, tagged and went to second on a flyout then scored when Bohanna grounded out to second. Clegg, Orender and Billins cracked consecutive singles to make it 8-2.

Lonoke got those two runs back in the bottom of the third but no more. So when Bryant added the six runs in the top of the fourth and Lonoke was unable to trim any more than one off the lead in the home half, it was out of reach and over.

Bryant’s fourth-inning outburst started with a single by Joyner. With one out, McGough tripled. He scored on a sacrifice fly by Thompson.

VanHoose revved it up again with a base hit. He scored on Smith’s double. When Dreake singled him in it was 12-4. Doubles by Bohanna and Clegg capped it off.

To start the tournament, Bryant struggled to hold down the Alabama team, which scored six in each of the first two innings then four in the top of the fourth to put it out of reach.

The Bryant Stars responded to the first six-run uprising with a run in the home first. Smith doubled and scored on a two-out single from Clegg.

Trailing 12-1 in the bottom of the second, Bryant whittled a pair of runs off the advantage. Danley and Joyner each singled. Kelley doubled in a run though Joyner was thrown out trying to get to third. Van Hoose singled and it was 12-3.

But the Alabama team got one of those runs back in the top of the third. In the home half, McGough doubled, and a Smith triple made it 13-4. A groundout produced the fifth run.

After Westside blew the game up with a four-run top of the fourth, Bryant managed singled by Billins and Danley but bother were stranded.