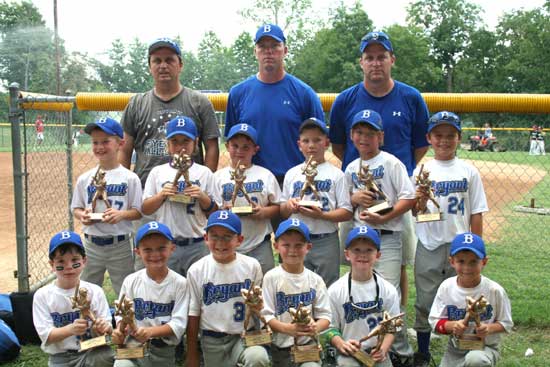 SHERWOOD — The Bryant 7-year-old All-Star baseball team tuned up for District Tournament play last weekend with a four-game sweep to the championship of the Fathers Day Tournament held at Sherwood.

The team opened the tournament with a 13-2 romp over the Benton 7’s then knocked off the Sylvan Hills Hawgs, 9-3. A 6-1 win over Little Rock Junior Deputy set up the championship game, a rematch with Sylvan Hills that Bryant won 12-5.

In the championship game, Bryant scored in four of its five times at the plate. The game was tied at 2 after an inning but Bryant held the Hawgs scoreless in the top of the second and forged a lead it didn’t relinquish with two runs in the bottom of the second.

Schroeder’s triple sparked the go-ahead uprising. Cooper Davis singled him in. Clay followed with a hit then he and Davis pulled off a double-steal with Davis scoring moments later on a groundout by Orender to make it 4-2.

Bryant blew the game open in the third after, again, holding Sylvan Hills in the top of the inning. Bessire’s single opened the inning. Noah Davis doubled, Ledbetter singled and Dillon ripped a two-bagger. An out later, Pennington cleared the bases with a triple to make it 8-2. He would score on a single by Cooper Davis.

Sylvan Hills managed three runs in the top of the fourth to stay alive and retired the Bryant Stars in order in the bottom of the inning. But the Hawgs couldn’t capitalize on an inning-opening double in the top of the fifth and Bryant put the game ice with three in the home half, putting the game out of reach. Bessire doubled to instigate the game-ending outburst. Noah Davis beat out a bunt for a hit and, after Ledbetter bounced out to second and Dillon popped to short, Wilson, down to his last strike, pounded a double to chase both runs home. Pennington’s hit ended it.

Bryant’s first-inning runs came after two were out. Ledbetter singled then Dillon blasted a home run.

Bryant’s defense was impeccable as Junior Deputy only managed to get seven players on base — just two before the Little Rock team came up with a run in the top of the fifth.

By then, Bryant had eked out a 2-0 lead. The Stars broke up the scoreless deadlock with a run in the third. Schroeder had a one-out single but was forced at second on Littleton’s grounder to third. Littleton reached first on the play and promptly stole second. He scored on a double by Dillon. Speer added a hit but Junior Deputy got out of the inning at that point with no further damage.

But, in the fourth, a two-out single by Ledbetter got Bryant going again. Wilson singled and, after a double-steal, Bessire knocked in the run that made it 2-0.

Little Rock put together a pair of singles and a double in the top of the fifth to get on the board. With the potential tying run at third and go-ahead run at first and one out, Bryant turned a sparkling doubleplay to get out of the jam and preserve the lead.

Sparked by that defensive gem, the Stars came out in the bottom of the inning with four consecutive hits. Coooper Davis singled and Schroeder chased him home with a triple. Littleton singled to make it 4-1. Dillon doubled and, with one out, Clay cracked a single to set the final score.

In the top of the sixth, Junior Deputy managed a pair of hits but stranded both runners as Bryant closed out the victory.

In the first meeting between the two teams, a pair of big innings for Bryant proved too much for the hosts. Bryant scored five in the second and, after Sylvan Hills cut the lead to 5-2 going into the fifth, scored four more to put the game out of reach.

The game was scoreless going into the second when Wilson, Bessire and Orender rapped consecutive singles. Cooper Davis followed with a double and, an out later, Dillon smacked a triple to clear the bags. He would score on Littleton’s groundout to give Bryant the maximum for the inning.

Sylvan Hills got a run back in the bottom of the frame but Bryant caught three straight pops on the infield to keep it 5-1.

It stayed that way until Sylvan Hills pushed a second run home in the fourth only to have Bryant trump that in the top of the fifth when Cooper Davis, Schroeder and Dillon drilled consecutive one-out singles. With two down, Speer belted a double. Clay put the finishing touches on the inning with a double that made it 9-2 before he was thrown out trying to make it a triple.

Sylvan Hills trimmed a run off the lead in the bottom of the fifth and had runners at second and third when Bryant recorded the final out.

Both teams scored in the first but Bryant kept scoring in each of the subsequent frames while Benton was only able to scrape up another tally in the third.

The initial Bryant run scored on a two-out single by Noah Davis and a double by Ledbetter.

In the second, the onslaught commenced. Bessire and Orender set the table with singles then Cooper Davis cleared the dishes with a triple. Schroeder’s single made it 4-1. Littleton singled but was forced at second on Dillon’s grounder to first. Speer spanked a double and, with two down, Pennington’s hit completed the five-run frame.

In the top of the third, Noah Davis sparked a four-run burst with a base hit and a stolen base. Ledbetter doubled him home. Wilson and Bessire cracked consecutive singles and, after two were down, Schroeder and Littleton each singled to make it 10-1.

Benton managed a second run in the bottom of the inning but then Bryant put the game out of reach with three in the fourth on hits by Clay, Noah Davis, Ledbetter, Wilson and Bessire.