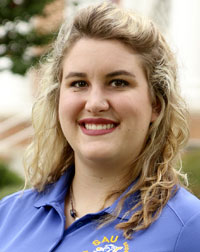 MAGNOLIA — Nicole Rutherford of Bryant, was recently selected to serve as a Southern Arkansas University’s President’s Ambassador for the 2016-17 academic school year.

The President’s Ambassadors (PAs) are the official student representatives for Southern Arkansas University. Their purpose is to promote and serve SAU. PAs serve as student hosts at various University events and provide tours for prospective students, parents, and other distinguished guests. They also assist the division of Enrollment Services in contacting prospective students by telephone and by mail.

A requirement of being part of this organization is the ability to project a positive and out-going personality, speak in front of large groups of people, and maintain an enthusiastic attitude about SAU. Students must complete 30 academic hours and have a cumulative GPA of 2.85. Selection to the President’s Ambassadors includes a completed application and an interview.

Rutherford, along with the other 26 PAs, receive a $1,600.00 scholarship per semester to serve under this organization.