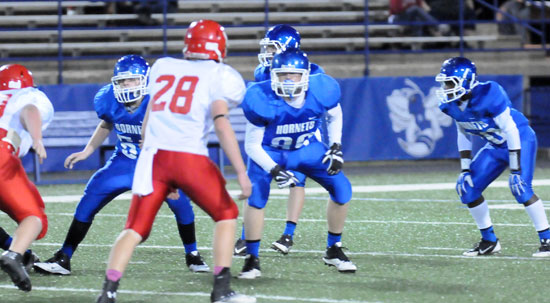 With an outside chance of still gaining a share of the Central Arkansas Junior High Conference championship, the Bryant Hornets freshman team will take on the Benton Panthers freshmen on Tuesday at the new Panthers Stadium.

The Hornets are 6-2 in the league, a game behind North Little Rock, whose lone loss was to Bryant, 12-0, on Sept. 26. Lake Hamilton and Cabot North are also at 6-2. With a Bryant win over Benton and a loss by North Little Rock to the underdog Catholic Junior Rockets, the Hornets would gain a share of the title. Wins by Cabot North over Cabot South as well as Lake Hamilton against Little Rock Central would create a four-way tie for the championship.

The Hornets come into the game with four straight wins after a 26-21 loss to Conway Blue on Oct. 3. Benton suffered a gut-wrenching 26-21 loss to Cabot North last Thursday.

The evening’s action will commence at 5:30 when Bryant Blue of Bethel Middle School takes on Benton in an eighth grade game. The freshman contest will follow.

Here are the updated standings in the CAJHC: