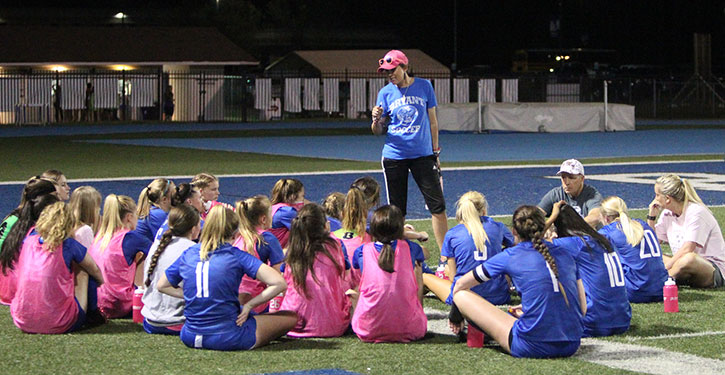 In a battle for first place in the 6A-Central Conference, the Bryant Lady Hornets had the Conway Lady Wampus Cats shut out for nearly 70 minutes. But Conway’s Rebecca Boone scored to tie the game 1-1 with 10:06 left to play. The game went to a tie-breaking shootout at the end of regulations and the Lady Cats prevailed, 5-4.

It was the first loss of the season for the Lady Hornets, now 8-1. Both teams were 6-0 in conference play coming into the contest.

“They were a good team,” said Bryant head coach Nicole Inman. “They have good speed and pressured us. I wouldn’t say better but a good team with good players.

“It’s a wake-up call,” she added. “We’ve got to decide to work and be hungry all the time.”

Bryant’s goal came with 18:30 left in the first half. Rachel Studdard sent in a corner kick that Mary Catherine Selig headed in.

Bryant’s top scorer, striker Alyssa Fason had a yellow card and so did Lauren Heath, according to Inman.

“The refs weren’t seeing things for both teams and calling things not there,” Inman said. “They settled a bit in the second half but it’s hard to play when things are getting call or not getting called consistently.”

Conway improved to 10-1-1 on the season with the victory.

The Lady Hornets will try to bounce back as they host Fort Smith Northside this Friday.