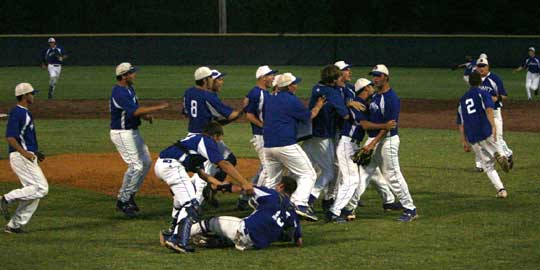 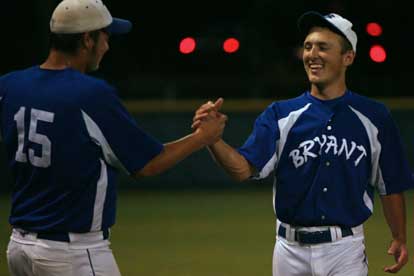 NORTH LITTLE ROCK — The sun was low in sky, hovering just above the first-base bleachers at Vince DeSalvo Stadium’s DeJanis Memorial Field in Burns Park Monday night as the game went to the bottom of the second inning.

The Bryant Hornets, battling 7A-Central Conference rival Little Rock Catholic, were coming to bat in a scoreless game that would decide which one would play the Van Buren Pointers for a State championship.

Junior Chris Joiner led off the inning against the Rockets’ sophomore lefty Patrick Gurley and, on a 1-1 pitch, he hit a chopper towards third. On the high hop, Catholic third sacker Matt Morris clearly lost track of the ball. He was unable to find it in time to make a clean play on the short hop and Joiner reached base on a tough error.

It’s not every day that an infielder loses a grounder in the sun.[more] 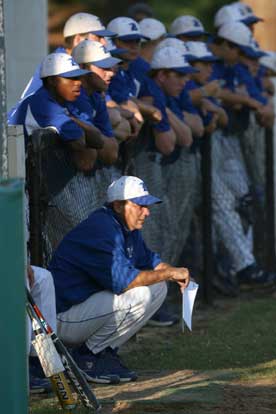 No one had any idea, at that point, how big a play that would be. But when Brennan Bullock sacrificed Joiner to second and Brady Butler smacked an 0-2 pitch for single to move him to third, it set the stage for an RBI single to right by senior B.J. Ellis.

And, as it turned out, that was the only run of the game as Blake Davidson, with last-inning help from Ben Wells, shut out the Rockets on three hits for a 1-0 victory.

Bryant will be making just the second trip to the State championship game in the history of the program, the first since the 2004 final against North Little Rock. At 23-8, the Hornets will take on Van Buren, which won another all-Central semifinal, 12-1 over Conway.

The two teams will meet at the University of Arkansas’ Baum Stadium in Fayetteville this Friday night at 7. The game figures to be a re-match of two of the best pitchers in the State, Bryant’s Ben Wells and Van Buren’s Brandon Moore, who dueled in a conference game at Bryant on April 26. In that game, the Hornets scored twice in the bottom of the sixth to win 2-1. That was the second game of Bryant’s current eight-game win streak.

It’s a far cry from the three dogged weeks during the heart of the season in which the team lost seven of eight including six straight conference games.

“I don’t know what happened during that stretch but I do know what happened to get them out,” declared Hornets head coach Kirk Bock. “That’s just starting to believe in themselves again. We reassured them that we thought they were the best team in the state of Arkansas and then they started thinking the same way once again.” 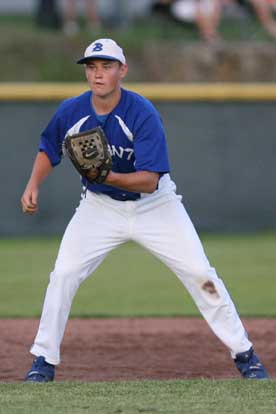 Now, they’ll have a chance to prove it.

On Monday, Davidson needed just 69 pitches to get through six innings. He credited his defense, particularly in the outfield. “I was just trying to throw strikes and let my defense help me,” he said after the game.

And that he did. Of those 69 pitches, just 17 were balls. He walked just one and only had two three-ball counts. Catholic managed to get just one runner past second and never got two runners aboard in the same inning.

The defense made all the plays.

Wells, who pitched the Hornets to a 3-2 win over North Little Rock in the quarterfinals on Saturday and only needed 85 pitches, struck out the side in the top of the seventh to put the clamps on the victory.

“The defense did a good job. It’s been solid all year,” acknowledged Bock, who led Harrison to a State title in 2008 before becoming the Hornets’ mentor.

“Blake did a great job,” he continued. “He had them off-balance, spread out the hits. Then Wellsy came in and could smell it.

“Blake has learned how to pitch,” the coach mentioned. “When he was younger, he was just a thrower. He was about the same size when he was young. Everybody kind of caught up with him but he’s smart enough to realize that, hey, I’ve got to learn how to pitch. That’s what he did tonight and that’s what he’s done all year for us.”

Ellis, the Hornets’ starting catcher, had to come out of the game in the fourth after he was hit in the wrist with a pitch. Sophomore Dylan Cross took over for him. Bock was hopeful that his senior would be ready for Friday. 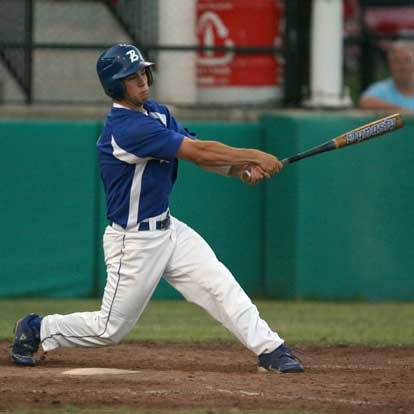 Gurley, with help from Rockets ace Stuart Montez in the fifth and sixth, nearly matched Davidson and Wells. Bryant only managed three hits. Gurley walked two and hit Bryant lead-off man Hunter Mayall twice. He pitched around the first time to start the bottom of the third. In the fourth, two-out walks to Cross and Tyler Brown then an errant pickoff throw to second had Caleb Garrett at the plate with runners on the corners. Garrett scalded the ball but right to Nick Rougeau in center to retire the side.

In the fifth, Mayall was hit again. Garrett Bock came up to sacrifice as he had successfully in the third, but, on the first pitch, Mayall was stealing second. He got in safely with ease but the homeplate umpire ruled that Bock had interfered with catcher Aaron Chwalinski. At first, Bock was called out and Mayall was returned to first but Catholic head coach David Estes protested. After the conference, it was ruled that Mayall was out and Bock should be back at the plate. But the Bryant coach filed his own protest. In an odd scene, two of the three umpires, after conferencing, left the field, presumably in search of a rulebook. When they returned, the original call was upheld.

So, with one out and Mayall back at first, Jordan Taylor smacked a one-hopper back to Gurley who turned to throw to second. The toss was a little high but shortstop Drew McMahan appeared to be in too much of a rush to haul the throw in and make a relay to first in hopes of a doubleplay. The throw ticked off the end of his glove and Bryant suddenly had two on and one out. 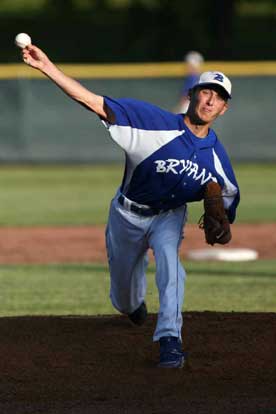 When Gurley’s first pitch to Joiner was out of the strike zone, Estes brought in his ace who promptly struck out Joiner.

With Bullock at the plate, an 0-1 pitch was in the dirt. Chwalinski smothered it but Mayall, eager to advance, got caught in a rundown and was tagged out to end the inning.

In the sixth, Bullock led off with a single up the middle, snapping out of his recent slump. He advanced on a passed ball then reached third on Cross’ one-out tap to first. But Montez got pinch-hitter Landon Pickett to bounce back to the mound to end the inning.

In the meantime, Davidson, after giving up a two-out double to Chwalinski in the first, gave up his lone walk to Hunter Rankin to lead off the third. Quinn Gasaway sacrificed him to second and he took third when Rougeau’s bouncer up the middle was flagged down by Taylor from shortstop. With two down, Davidson got McMahan to groundout to second to end the threat.

Blaine Tanner singled with one out in the fourth for Catholic. He took second on a wild pitch but got no further. A sliding catch in right by Garrett off a hump-backed liner off the bat of Zach Gibson helped. Davidson then struck out Morris.

He worked a 1-2-3 fifth, needing just four pitches. In the sixth, he retired the first two before Chwalinski smacked an 0-2 pitch up the middle for a hit. The count went to 0-2 on Tanner, who fouled off four pitches before skying to Garrett in right.

Wells needed just seven pitches to strike out Gibson and Morris to start the seventh. He got down to Chase Barnes 3-0 but came back to get the strikeout, finishing it with a slider that Barnes swung through.