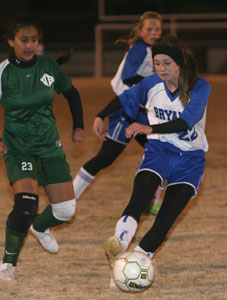 The Bryant Lady Hornets welcomed the Van Buren Pointerettes to the 7A-Central Conference with a 6-1 thumping at Bryant Stadium on Tuesday, March 3.

Lindsai Arceneaux scored three goals in the first half and Erica Selig added one as the Lady Hornets rolled to a 4-0 halftime lead then scored twice more in the first 10 minutes of the second half to invoke the “mercy rule” on their way to their third straight win.

They’ll take a 4-1 overall record and 1-1 mark into their league match at Russellville on Thursday, March 5.

Sarah Manning and Amber Moskow added the second half goals for the Lady Hornets. Manning, Jessica Baugh and Maggie Hart each had assists.

Megan Childress had two saves in goal, as did Kaitlin Miller. Van Buren scored its long goal late in the contest.[more]

“We were able to sub a lot over the last 30 minutes,” noted Lady Hornets coach Doug Maxwell. “We cleared the bench and let some of our younger players get some quality minutes in.” 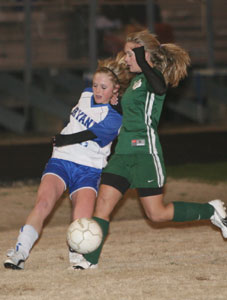 “We didn’t allow much of an offensive attack for (Van Buren) at all,” he added. “They attempted to play some long balls early in the first half but our defense did a good job of counteracting those. After we settled down — it took us about six minutes before we started settling our passes down. Once we did that, we were really able to take control of the game.

“We had quite a few scoring opportunities in the first half, we just weren’t able to put them away,” the coach mentioned. “It was good to see Lindsai Arceneaux have a breakout game like she had tonight. She had several breakaways, similar scoring chances to what we had against Mount St. Mary’s (in the team’s lone loss, 1-0) when we just weren’t able to get the shot off. Tonight she got the shot off a little bit quicker and was using the corners better. That helps her confidence there.

“We got another strong performance from our defense and Megan Childress, limiting their offensive attacks for us.

“I was really pleased with the way we played,” Maxwell concluded.