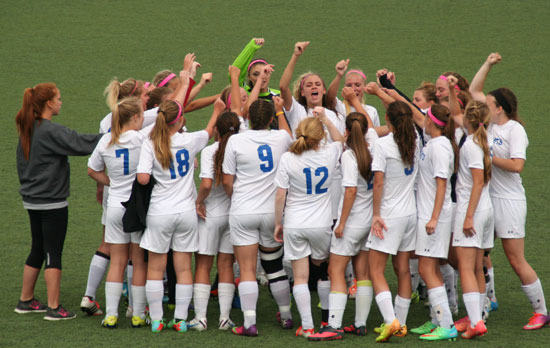 Bryant girls to play for Class 7A State soccer title

BENTONVILLE — For the first time in the history of the program, the Bryant Lady Hornets will play for a State soccer championship.

Bryant, which came within a win of getting to the Class 7A State title match last year, defeated Little Rock Central 2-0 on Saturday to advance to the finals at the University of Arkansas in Fayetteville next Saturday at 10 a.m. They’ll face the Bentonville Lady Tigers, a 2-1 winner over Mount St. Mary Academy earlier on Saturday.

The victory, which improved the Lady Hornets to 21-0-2 and was, phenomenally, their 18th shutout of the season, was also nothing short of incredible. Bryant played more than half of the game a player down. That’s right, with 10 players battling 11 Central Lady Tigers after a red card cost the Lady Hornets a player, a highly valuable senior midfielder, who will now have to sit out the title match.

They already had their 2-0 lead by that time with freshman Caroline Campbell, who missed most of Friday’s 1-0 win over Rogers due to injury, scoring both goals. Campbell did not start on Saturday but Lady Hornets head coach Julie Long got her into the action in time to score the first goal about halfway through the half.

“Anna (Lowery) did a lot of the work,” Long recounted. “She got it past (the defense) but one of the defenders just kind of poked it away just a bit and Caroline was there and took a beautiful shot.”

Around the 10-minute mark, Kara Taylor presented Campbell with the opportunity with what Long called, “a beautiful cross.”

“It just happened to get through everybody and got to Caroline on the backside, wide open, and she poked it in,” the coach said. “Kara’s cross, she couldn’t have played it any better and she got the assist.”

The red card came just a few minutes later but the Lady Hornets found a way to make those two goals hold up.

“It was truly a group effort — I mean, a team effort,” Long emphasized. “Everyone kind of had to step up and fill different spots. The second half, I got a ton of people in so we didn’t run them to death. I tried to keep fresh legs in, trying to make sure we were getting pressure all over the field. They knew what they were supposed to be doing and they did it the second half. They kept the pressure on them. We even had several scoring opportunities, probably just as many or more than (Central) even had even though we ware down a player. So, it was definitely a team win today. It was just awesome. As a coach, it’s what you would want. The entire team had to come together to fill the gap. But (the red card) kind of makes it bittersweet.

“Our defense, obviously, played phenomenal,” she continued. “They’re still holding their shutout (streak of five consecutive matches and nine of the last 10). Maddie (Hawkins), our keeper, had an awesome game. Hadley Dickinson stepped up. I kind of made her do some things she’s never had to do and, as a freshman, she did them pretty well without making a mistake. It was impressive. Our defense played very well but a lot of that came back to Hadley stepping up. I kind of man-marked her on a player. I don’t normally do that ever but (Central) pretty much had one player that was a big threat. It was good fit to mark her with Hadley. They were probably about the same speed. Both are really fast.

“Rori (Whittaker) stepped up and played huge,” the coach mentioned. “She had to cover the middle. They all played great.

“We’ve got a lot to work on for next week, though, trying to get ready,” she said, adding that the team won’t have to go a player down in the final. “This weekend, it honestly felt like everything was against us but somehow we came away still winning. By the end, the girls were like, ‘If we can overcome this, we can overcome anything.’ But they know they’re going to have to play their top game this next week, playing Bentonville. Bentonville looked very good this weekend. We’re going to have to work hard this week to get some people to step up but I honestly believe, after seeing how they stepped up the second half of this game, they’re not going to have any problem doing it.”