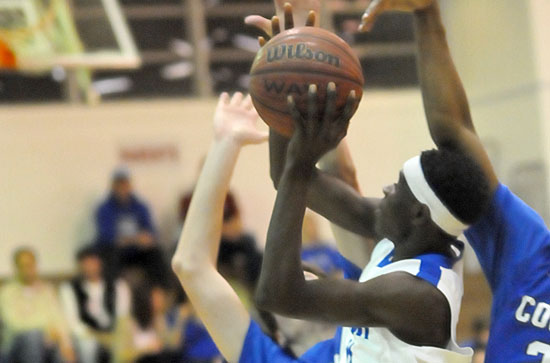 Bryant grabs 2 seed for State with comeback win over Conway 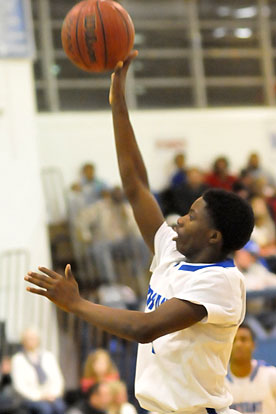 Calvin Allen releases a floater from the lane. (Photo by Kevin Nagle)

In a game that was called pretty tightly most of the way (to the tune of 46 fouls and 65 free throws between the two teams), Bryant Hornets head coach Mike Abrahamson took exception when, with just under six minutes to play, junior Kevin Hunt hauled down a rebound after a pair of Conway Wampus Cats misfires, was knocked to the floor and called for walking.

The Cats retained possession and John Nekonchuk scored inside to give his team a 39-34 lead.

With his team desperately scrambling to try to rally, Abrahamson protested to the point of being given a warning with 5:41 left.

It seemed to lock-in the Hornets focus and, as it turned out they went on a 20-7 surge, which included a 13-of-15 performance at the free-throw line as they caught and passed the Cats on the way to a 54-46 victory in the final game of the regular season.

Both teams will advance to the Class 7A State Tournament, which begins Wednesday, March 4, (weather permitting) at Springdale Har-Ber. The win, which completed a rare (first-ever?) season sweep of Conway, earned the Hornets a No. 2 seed with Conway becoming the 3 seed.

Bryant will open State play on Wednesday at 8:30 p.m., with a rematch with Rogers Heritage. In their second game of the season, the Hornets played the War Eagles at their gym and suffered a 52-38 loss.

With one senior, Wesley Peters, who was honored on Senior Night, and a roster of 21 that included 13 sophomores — six of the 10 players that saw action Saturday — these Hornets have come a long way.

“I was talking with Coach (Dominic) Lincoln, our middle school coach at Bethel,” related Abrahamson. “He mentioned our youth before the game and I said, ‘Well, you know, it’s true. And they still play that way sometimes but, by this time of the year, you really can’t use that anymore. 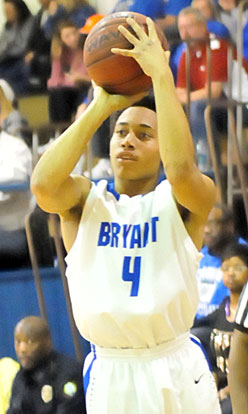 “And, to our kids’ credit, they don’t play the same way that they did in November,” he acknowledged. “They’re making winning plays now. They’ve come a long way. To start off (the season) 0-3 and finish 14-12 with this inexperience against our schedule — I’m proud of what we did in the regular season. But what we have coming up is what you work for.”

The Hornets got 15 points each from Romen Martin and Kevin Hunt. Peters finished with 10 and Calvin Allen 7. Lowell Washington added 5 to go with a game-high 12 rebounds including an offensive board that he stuck back in as he was fouled with 3:30 left to play. He completed the three-point play, putting Bryant ahead to stay.

The winning surge began with a drive by Hunt. Conway’s Tyler Smith hit a free throw to make it 40-36 with 5:13 to go as Hunt picked up his fourth foul.

After a pair of Bryant misses, Javonte Ellis, Conway’s leading scorer, was fouled. But he missed both shots. Hunt ripped down the rebound and, this time, the foul was called. He went to the other end and knocked down two free throws to cut the margin to 2.

Moments later, Prentice Mullen drove for a basket to make the edge 4 again.

Martin, the Hornets’ sharp-shooting sophomore, had been frustrated much of the night, with a defender face-guarding him wherever he went when the Cats were in man-to-man and when they tried a box-and-one along the way. He had missed his first seven 3-point tries.

Conway’s Kennedy King missed a 3, opening the door for the Hornets to gain the lead. That’s when Washington came through with his three-point play. 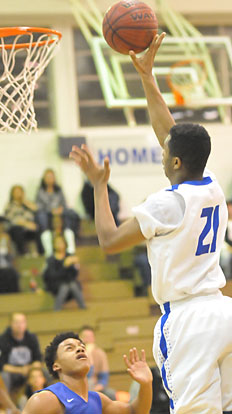 The 6-7 Neckonchuk missed a jumper and the Hornets began to milk the clock, spreading the floor but taking opportunities to attack the rim when they presented themselves. It starter a parade to the charity stripe. Peters cashed in the first two at 2:41 to make it a two-possession game, 46-42.

After a timeout, Conway point guard Denzel Johnson drove and dished to Smith for a basket at the 2:18 mark. But that proved to be the Cats’ last field goal.

Martin drained two free throws then Hunt added one to stretch the margin to 49-44 with 1:09 to go. The Hornets took advantage of each Conway miss. Peters hit from the line with :38.8 to go then Martin coolly drained two more at the :24.9 mark to push the lead to 52-44, the largest of the game for either team.

With :16.9 left, Hunt fouled out and Ellis went to the line. A frustration technical followed and Ellis was awarded four free throws and the Cats retained possession. It couldn’t been as much as a 7-point swing. But Ellis could only get the first two shots to fall and, on the possession followed his two misses, Johnson aired a 3.

Martin capped off the victory with two more at the line with :04.6 to go.

“I’m really proud of their defensive effort, their toughness,” Abrahamson said of his squad. “The officiating was tight and frustrating for our kids at times but they played through it.

Bryant led much of the first quarter. Calvin Allen snapped an 8-8 tie with a free throw but Ellis converted twice and the Wampus Cats had a 10-9 lead at the first break. 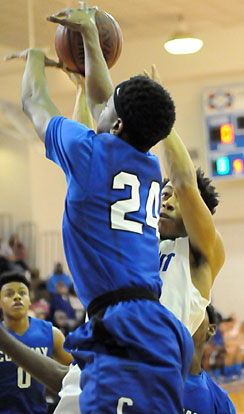 Rickie Allen meets Conway’s Tyler Smith (24) on the way to the hoop. (Photo by Kevin Nagle)

Neither team shot well from the field. Bryant made hay at the line, converting 7 of 11.

In the second quarter, however, the fouls started piling up. Before the half was over, the Hornets had six players with two fouls including all five starters. Yet, they trailed just 13-11 going into the final two minutes.

Conway pushed the lead to 16-11 and Abrahamson took a chance, returning his starters to the floor. Peters drove for a clutch basket with :31 left but a buzzer-beater by Conway’s Jamaal Clifton had Conway up 18-13.

“When we got into foul trouble in the second quarter there, that took our aggression away,” Abrahamson noted.

“It was a different game but the interesting thing was it was a very similar halftime adjustment talk as the game at their place,” he added, referring to Bryant’s 39-33 win on Jan. 27. “We had them shooting at 24 percent in the first half, which told me that, when our defense was set, we were doing a really good job. The problem was we weren’t getting our defense set enough and they were putting their head down in transition and attacking us and getting to the line. So the talk was the same. Let’s get a set defense, stop their penetration. Let’s contest their shot. Let’s get that first rebound and go play offense.

Though he led his team with 12 points, Ellis converted just 2 of 10 from the field in the game. He was 8 of 14 from the free-throw line.

After the Hornets had been cited on a trio of offensive fouls in the first half, Lewis set up and absorbed one on the first shot attempt of the second half, a drive by Johnson.

Washington’s stickback cut the lead to 3 and, after Ellis scored, Peters splashed a triple to make it 20-18.

But Conway pushed out to its largest lead of 7. And the Cats led 30-24 with 2:47 left in the third but Peters and Hunt ignited a rally. Peters scored and was fouled at the 2:35 mark. He missed the free throw but Hunt somehow got the rebound and was fouled on the follow. His free throws made it a 2-point game again.

Ellis converted twice at the stripe with :52.6 left in the period but Martin scored of a nice spin move. Hunt took advantage of a Conway turnover, drilling a 15-footer and it was tied 32-32 going into the final seconds of the quarter.

King hit a free throw with :03.9 left. The Hornets rebounded and Hunt pushed up the floor to just inside the timeline where he launched a shot at the buzzer. It didn’t go but Conway was called for a foul. With no time on the clock, Hunt converted 2 of the 3 shots, giving Bryant a 34-33 lead going into the final eight minutes.

The lead didn’t last long. Nekonchuk, who had 11 points in the game, started a 6-0 run that preceded the Hornets’ scintillating comeback. 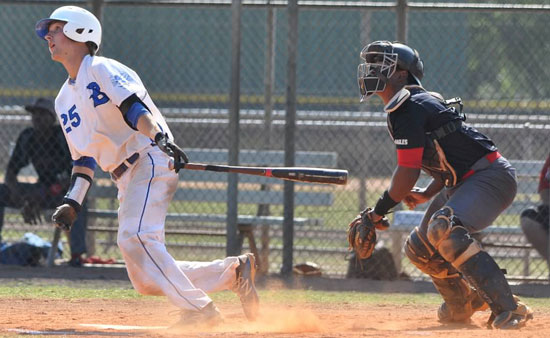 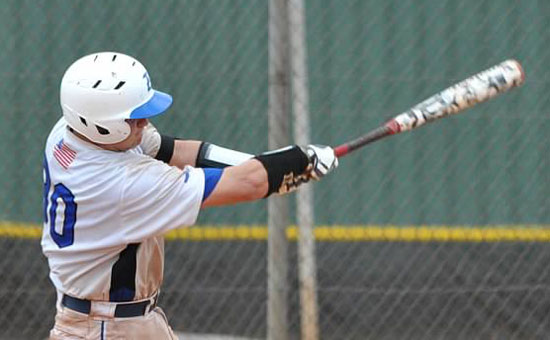