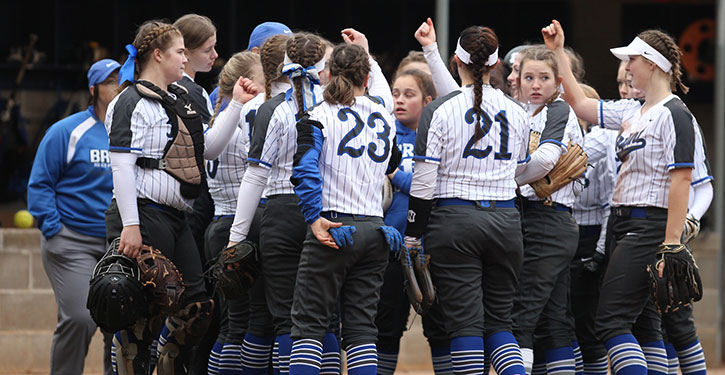 For more pictures from this event by Rick Nation, go here

Gianni Hulett, Aly Bowers and Regan Dillon were over-powering as were the Bryant Hornets as a whole in the 2019 season debut on Friday night as they run-ruled the Camden Fairview Lady Cardinals, 15-0.

Hulett, whose season ended prematurely last year with a severe knee injury, returned the circle and struck out the first five batters she faced. The sixth batter, Kori Smelser, got the bat on the ball but just bounced back to Hulett.

Hannah Work relieved in the third and retired the side in order to complete the abbreviated perfect game.

“She came out hot,” acknowledged Lady Hornets coach Lisa Dreher. “That was big, coming out and getting the first game out of the way for her. I was glad she had a good showing.”

Not only did Hulett pitch well but she got a sacrifice bunt down that she nearly beat out with her hustle. In the second inning, she walked then reached on an error on a shot to right. Again, she ran the bases aggressively, sliding into second on the error. She scored both times.

Bowers, a senior, and Dillon, a freshman, muscled up for the Lady Hornets. Each drilled a home run against the wind.

“There’s a lot of little things we’re trying to do, we’ve been practicing on, and they executed well,” Dreher said of her team, which includes a mix of upper-classmen and freshmen. “Base-running, communication, just being smart. It’s kind of a new group out there. Just getting to know each other.”

Bryant took a 3-0 lead in the bottom of the first when Meagan Chism, who moved from catcher to shortstop this year, belted the third pitch she down the line in left for a double. Hulett bunted her to third then a wild pitch allowed her to score.

Bowers reached on an error then, on the third pitch of her high school career, Dillon laced a screaming liner over the boards in center, a liner that never got above 12 of 15 feet off the ground.

And 11-run second made the game lopsided. Freshman Caitlin LaCerra worked a walk and, after Chism popped to second, caught the Lady Cardinals unawares, sprinting to second after a delayed tag.

A walk to Hulett put runners at first and second for Bowers who sliced a drive down the right-field line for a two-run triple. Dillon shot a single up the middle to drive in the third run of the inning, making it 6-0.

Bella Herring added to the hit parade with a knock to left to set the table for Haleigh Beck. Her single to center plated courtesy runner Joely Calhoun (running for Dillon, Bryant’s catcher). Herring sprinted to third and, on a late throw there, Beck hustled into second.

Maddie Thompson was plunked by a pitch to load the bases. Alissa Suarez followed with a grounder to short that Fairview’s Madison Thurman bobbled just enough that Herring beat her throw to the plate.

Beck scored on a wild pitch. Another error allowed LaCerra to reach safely as Thompson scored, making it 9-0.

Suarez came home on Chism’s groundout to short. Hulett followed with the drive to right that was dropped. LaCerra scored and Hulett wound up at second. She took third on a wild pitch before Bowers unloaded for her homer to left-center to make it 14-0.

In the home third, Bryant made it a run-rule game. Herring led off with a single but was thrown out trying to sneak into third when Beck’s bunt drew a late throw to first. Though Herring was out, Beck got safely into second. She stole third then scored when Thompson’s grounder to misplayed, ending the game.

The Lady Hornets jump right into conference play on Monday against the Mount St. Mary Belles. Tuesday, they host a leg of the Central Arkansas Softball Shootout. Bryant will play Beebe with Rose Bud and Greenbrier following that up.

Games for the 17-team tourney will also be played at Cabot, Vilonia and Conway.