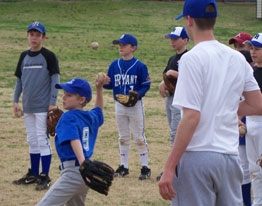 The clinic stressed baseball fundamentals to assist players in preparing for the upcoming youth baseball season at Ashley Park. More than 725 players ranging in ages from 4-15 years-old have registered to play in the upcoming season.

“We are thrilled about the continued cooperation of the Bryant High School baseball program and the Bryant Athletic Association,” said Darren Hurt, BAA president. “Coach Bock has a gift for teaching baseball. The players that participated in the clinic will benefit from his advice.”

According to Hurt, the BAA baseball program plans to continue to grow as the league will move to the new Bishop Park facilities in 2010.

“We are simply booked to the maximum for field space at our current facility,” he said. “We look forward to expanding the baseball program at the new facility.”

Thanks to Rob Roedel for the clinic update.