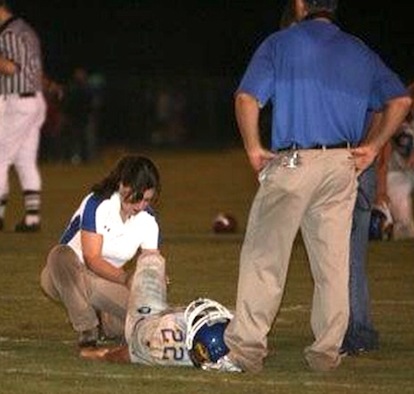 “You know, 30 years ago when I started coaching, the coaches did all the taping,” recalled Bryant athletic director Tom Farmer. “If there was an injury, we’d go out and say, all right, put some ice on it, and move on.”

The other variation of that scenario is the classic (exaggerated, of course) instance when a coach would be looking down on an injured player and saying something like, “Okay, rub a little dirt on it and let’s go.” Then helping the player up.

But times have changed. With the advances in medicine and health care in a broad array of fields, a little more expertise is called for. And more and more, public schools are following the lead of colleges and professional athletics by making sure there’s an athletic trainer available.

Bryant, as Farmer related, is one of those schools.[more]

“Now, we actually have a professional, someone who’s trained to address the medical problems we face every day in athletics and it’s very important to our program,” he stated.

That professional is Christa Finney of OrthoArkansas. She is now in her fourth year as the athletic trainer for the Bryant School District. She’s worked 12 years including two as an intern with Ortho.

She’s served as a trainer at Little Rock Catholic then helped implement programs at Little Rock Episcopal Collegiate then Arkansas Baptist. When Danny Brown, the former trainer at Bryant, decided to take a teaching position at the school, Finney was asked to move to Bryant.

Originally from Little Rock, Finney did her undergrad work at Ouachita Baptist University. She did her grad work at the University of Central Arkansas. She was originally in Speech Pathology but decided to go back to school.

“I had been in to a trainer as an injured athlete in college and kind of got a feel for it then,” she recalled. “I decided I wanted to give it a try so I went back and did some post-grad work and got my Master’s in Kineseology and Athletic Training. And I’ve never regretted it.”

“It’s just to kind of recognize what we do as a profession and trying to get the word out about what we do and how we can be of service to the community and the schools,” Finney related.

“Krista is a vital part of our program here at Bryant,” Farmer stated. “She just has a great rapport with parents. She cares about our kids. She fits in well with the coaches. She’s just as big a part of the family as anyone we’ve got here. And the thing that she does that’s so amazing is she covers everything. She’s in every sport, she knows the kids, she’s knows their strengths and weaknesses and she’s real good at what she does. If I had sons playing, like I did at one time, I’d want her to be the trainer. I appreciate everything she does.”

To this point, it’s still not the norm at most Arkansas schools to have a trainer.

“That’s another reason for why they started National Athletic Trainer month the last three or four years,” Finney noted. “We actually have a legislative task force that I’ve actually been a part of it. We’re trying to get Arkansas legislation to where every secondary school is going to be required to hire an athletic trainer, whether that’s in a role of teacher-slash-athletic trainer or hiring outright an athletic trainer or even like having an athletic trainer paid half by the school and maybe half by a clinic or what have you. However, they work it out whether it’s outreach like we do at OrthoArkansas or half-and-half.

“Right now, I’m paid half by OrthoArkansas and half by Baptist Hospital,” she mentioned. “Because they’re partners in the sports medicine program.”

As for the advantage of having an athletic trainer on hand, Finney related, “It just completely decreases the liability,” she stated. “When you have somebody here who knows how to take care of an injury, knows how to assess an injury, knows when it’s time to go see a doctor versus, you know, ‘We can tape this up and you can go.’

“It takes a tremendous amount of pressure off the coaches,” she continued. “They’re busy coaching. They don’t have the time to come in (to the training room) and pretend like they know what’s going on with somebody or have to take time out to tape them or take time out to see if they need to go see a doctor. I’m able to assess that on the sideline, whether they can go back in or not. If we’ve got injuries, they come in (to the training room) and I can take care of them and get them back out there. That’s one less burden off the coaches.

This year’s theme for National Athletic Trainers month is “It’s a Team Concept,” Finney mentioned.“I need to work with these coaches and they have to be able to trust me,” she said. “I’m going to have to be able to communicate with the doctors — just having the coaches, the parents, the doctors, the administrators working together.”

The NATA website describes an athletic trainer as “an expert at recognizing, treating and preventing musculoskeletal injuries. AT’s meet qualifications set by the Board of Certification, Inc., and adhere to the requirements of a state licensing board. ATs practice under the direction of a physician and are members of a health care profession recognized by the American Medical Association.

“Requirements: Must obtain, at minimum, a bachelor’s degree in athletic training; must pass a comprehensive exam to earn the ATC credential; must keep their knowledge and skills current by participating in continuing education; must adhere to standards of professional practice set by one national certifying agency and to a national code of ethics.