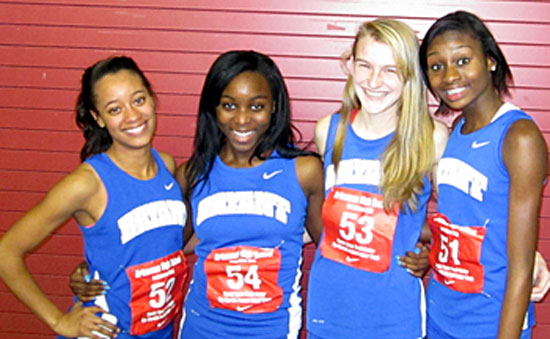 FAYETTEVILLE — The Bryant Lady Hornet track team kicked off the 2013 season Saturday with four athletes competing in the University of Arkansas National High School Indoor Invitational. The meet was held at the Tyson Track Center in Fayetteville.

All four of the Lady Hornets that competed scored in their respective events.

Senior Alexis Royal took fourth place in the triple jump with a leap of 36’2”. She was also the top Arkansas finisher in the 60-meter hurdles with a time of 9.32.

Senior Hannah Raney was the top Arkansas finisher in the 3000-meter run taking seventh with a time of 11:10.

Junior Melinda Murdock scored fifth place in the 800-meter run with a time of 2:24. She was second for Arkansas in the 60-meter hurdles behind Royal with a time of 9.56.

Sophomore Fenice Boone was the only Arkansas competitor to make the finals in the 400-meter dash. She scored sixth place overall with a time of 59.6.

“I am really proud of the way our girls competed,” said Bryant coach Danny Westbrook. “This meet brings in the best track and field athletes from all over the country and our girls stepped up and held their own. Just scoring (top 8), is a huge accomplishment in this caliper of competition.”

Bryant’s full team will compete at the state indoor championship to be held at the Tyson Center on February 2.