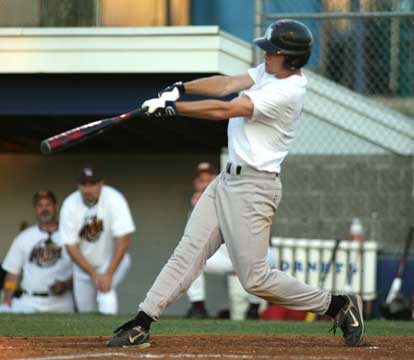 The win improved the Sox to 16-2 overall and 5-0 in league play. They were set to host Hot Springs Lakeside on Monday then visit Lake Hamilton on Tuesday but both games were postponed. The Sox' Tyler Sawyer and Kaleb Jobe will be playing in the Arkansas High School Coaches Association All-Star baseball game in Fayetteville on Tuesday while two or three other Bryant players attend the Area Code games tryouts. Lakeside was likewise going to be short of some key players and Lake Hamilton agreed to re-schedule.

So the Sox are set to return to action with another league game against Little Rock Continental Express on Wednesday at Gary Hogan Field at UALR.[more] 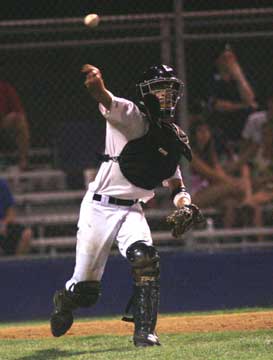 Justin Blankenship, who recently agreed to a scholarship offer to continue his baseball and academic careers at the University of Arkansas-Fort Smith, provided hitting and pitching in the clutch for the Sox on Saturday with a pair of two-out RBI singles for the offense. He also pitched out of a bases-loaded jam in the fourth inning, coming on in relief of starter Ben Wells.

"Justin's a good player," Harrison commented. "He's really come around. He knows his role. I like him in the lead-off spot. It's just by happenstance that he moved up there when Hunter (Mayall) was gone and I like our lineup now."

Kaleb Jobe also contributed some clutch pitching, relieving Blankenship in the sixth with the potential tying run coming to the plate with one out and escaping.

He was aided by a couple of those clutch defensive plays turned in by Hunter Mayall at third and Wells at first.

And, along the way, centerfielder Caleb Garrett made a pair of lunging catches.

Wells shut short-handed Post 1 out over the first three innings and the Sox built a 3-0 lead against hard-throwing right-handers Davis Ward. In the second, Mayall, who was 3-for-3 in the game, pulled a single into right. Jobe followed with a lined shot down the right-field line to put runners at second and third. But Ward struck out a pair around a walk to Brennan Bullock bringing up nine-hole hitter B.J. Ellis. The two battled to a 3-2 count and, after Ellis fouled off one delivery, he took ball four to force in a run.

Ward got Blankenship to pop to short to get out of the inning but that was the last time Little Rock would get him out.

In the bottom of the third, Garrett beat out a slow roller to third for a hit. After he swiped second, Mayall's one-out double chased him home to make it 2-0. Jobe was intentionally walked but, with Brady Butler at the plate, a balk sent runners to second and third. Butler picked up an RBI with a groundout to third but the inning ended when a return throw to third retired Jobe who was trying to advance after the throw to first had been made. But Mayall had scored before the third out and the Sox led by three. 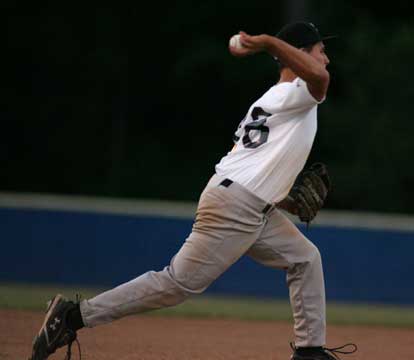 Wells retired the first two in the fourth with little trouble before Dustin Ward drilled a double to the fence in right-center. Michael Marsh singled him in and Blue was on the board. An errant pickoff throw to first allowed Marsh to take second then Wells struggled with his control, walking Davis Ward and Joe Ramm to load the bases.

Blankenship relieved to face Will Andress who flew out to Butler in right, who nearly over-ran the ball.

Bryant got the run back in the home fourth. Wells slapped a one-out double to right and advanced to third as Ellis fanned. That brought up Blankenship who yanked a 1-0 pitch into right for an RBI single that bumped the lead to 4-1.

"We really needed to get that run in," Harrison noted. "Justin stayed back and pulled the ball. He had an idea of what was coming with a guy on third. He was looking for a fastball and got it.

Blankenship worked a 1-2-3 fifth and Tyler Brown, on in relief of Ward, pitched around a one-out single to Mayall and an errant pickoff throw, with a pair of strikeouts in the bottom of the inning.

In the sixth, Daron Watson rifled a double to right and, an out later, Marsh cracked one to left-center that was nearly chased down by Garrett. Harrison called on Jobe to close out the game and he got Davis Ward to fly to center for the second out. Ramm followed with a shot between Mayall, at third, and the bag. Somehow, he backhanded the ball and fired a throw to first that was short. On an awkward bounce, Wells somehow snared it cleanly for the out to retire the side.

"That was a key play," Harrison stated. "I don't know how Ben caught that ball — and caught it for the out rather than just knocking it down. That's a big play. If that gets by either of them, it's 4-3, they've got the tying run at second and anything can happen."

In turn, the Sox busted the game up in the bottom of the inning and, again, it was a two-out RBI knock by Blankenship that broke the seal. Bullock had walked and swiped second. He moved up on a groundout by Ellis but was there at third with two down when Blankenship lined a single to right to make it 5-2.

He stole second and scored on Garrett's singled to left. With some heady baserunning, Garrett wound up at third. He took second on a late throw to the plate and, when it skipped past Ramm, the catcher, he sprinted to third.

Walks to Tyler Sawyer and Mayall loaded the bases and brought another pitching change. Will Andress unleashed a wild pitch that got Garrett home then walks to Jobe and Austin Benning forced in the final run.

Jobe eased to the first two outs of the seventh then issued walks to Brown, John Gray and Watson before finding his groove again to strike out Dustin Ward to end it.

Junior Sox make it three straight with 10-5 win over LR Blue
‘Dad? Wanna have a catch?’