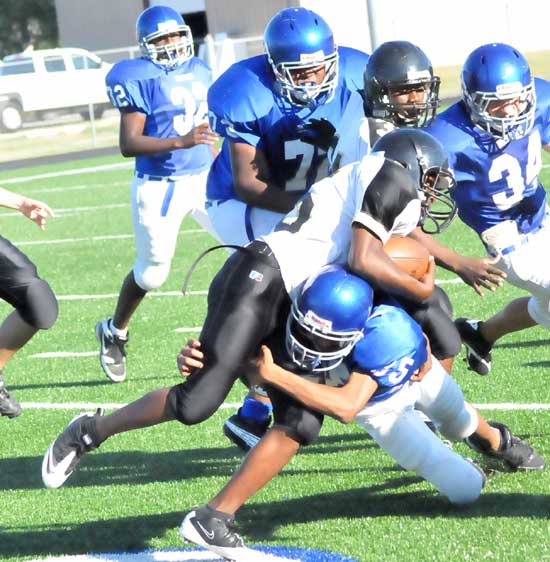 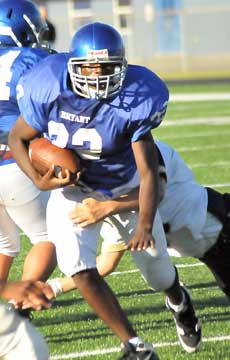 Devon Alpe scored the lone touchdown of the game on a 4-yard run as defensive linemen-turned-blocking backs, Chris Lawson and Cameron Murray helping to clear the way.

The score came with 5:52 left in the first half moments after the Hornets had recovered a Trojans fumble 7 yards away from the end zone. Demaja Price, who led the Hornets with 85 yards on 13 carries, picked up 3 yards to set up Alpe’s TD tote.

Now 1-1, the Bryant White team is set to return to action at Conway on Thursday, Sept. 22.

Fumbles ended the first three possessions of the game. Hot Springs turned it over twice without picking up a first down. Bryant had marched from its own 42 to the Hot Springs 14 when a fumbled snap was covered by the Trojans.

The Hornets’ drive was highlighted by a 13-yard burst by Alpe and an 11-yard bolt by Price. After the fumble ended the drive, Hot Springs was pushed back by a penalty and, on a first-and-15, running back Quantavious Haywood was separated from the ball and Bryant recovered.

After the Hornets scored, the Trojans picked up their lone first down of the first half but another penalty pushed them back and, on a second-down play, Price dropped Nate Jones for no gain then a pass attempt failed. On fourth-and-11, Jones swept for 7 yards before Kaliq Slater dropped him short of the first down. 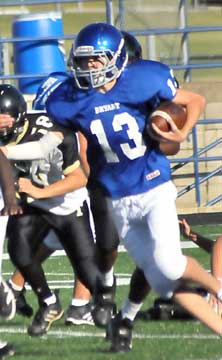 The Hornets took over and Price immediately dashed for 11 yards. Bryant reached midfield where on a third-and-4, quarterback Jaret Jacobs was sacked for a loss of 8. A fourth-down pass fell incomplete and Hot Springs took over. Two plays later, however, another fumble, recovered for Bryant by Quinton Royal, ended the possession.

Hot Springs got a break to start the second half, recovering a Bryant fumble just 20 yards away from a tying score. But the Hornets’ defense made a stand. On third-and-goal at the 6, Justin Cagle dropped fullback Robbie Lamb for a loss of a yard. On fourth down, Jones was stopped at the 4 by Price.

The Hornets rooted out to the 35 but another fumble cost them possession but, again, the defense stepped up to preserve the shutout. The Trojans picked up a first down at the 25.

Lamb got the call and was met immediately by the Hornets defense and stood up. He turned and flipped to quarterback Kejuan Christian who managed to race to the corner to get 2 yards before Kameron Guillory and Murray brought him down. The middle of the Bryant defense then stopped Lamb for a loss of a yard to set up a third-and-9 at the Bryant 24.

Jones carried to the 19 but, on a fourth-down play, Christian’s pass fell incomplete inside the 5 with 3:09 left to play.

From there, the Hornets pounded out three first downs to run out the clock. Price contributed runs of 12, 7 and 15 along the way, the last of them picked up the close-out first down at the Hot Springs 36.