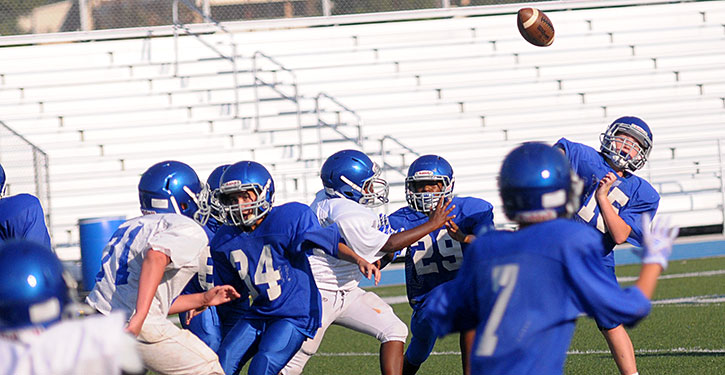 Defensive stands helped the Bryant White Hornets seventh-grade football team of Bryant Middle School hold on for a 14-12 win in an evenly-matched contest with the Bryant Blue Hornets of Bethel Middle School at Bryant Stadium on Tuesday night.

The difference in the scoring wound up being a two-point conversion that Bryant White’s Dylan Vinson ran in after the first score of the contest.

Brennan Robbins scored the touchdown on a jet sweep.

Bryant Blue scored on a 5-yard pass from Landon Jackson to Nick Miller and it was an 8-6 White lead at the half.

To open the second half, Blue took the lead when Jackson ran for a touchdown. He finished with 72 yards on nine carries and completed 6 of 14 passes for 52 yards. Gavyn Benson had three of those receptions for 12 yards. Miller had two catches for 18 and Ryan Van Roekel caught a pass for 17 yards.

White countered with a six-play drive that was capped by a 30-yard touchdown run. By Artenis Lewis to make it 14-12.

“We then held them four times in a row to end the game inside the 20-yard line,” said White coach Andrew Jenkins. “Braden Atkins had a huge interception in the second half. Marvion Williams played a great game defensively with five tackles at cornerback and two pass deflections.”

For Bryant Blue, Jaiden Ruple had 16 yards on four carries with Benson, Miller and Jaylen Gray carrying the ball as well.

The next game for Bryant Blue will be Monday, Sept. 16, at Hot Springs. Bryant White returns to action on Tuesday, Sept. 10, against Pine Bluff.