HOT SPRINGS — Two rushing touchdowns, two passing touchdowns and a TD for the defense which held Hot Springs Lakeside to just 33 yards of total offense without a first down — that’s the story of the 33-0 win by the Bryant White Hornets eighth grade football team of Bryant Middle School on Thursday. 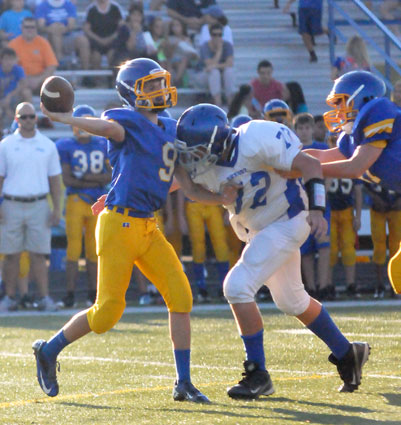 It was the season-opener for the Hornets and it was complete victory as they built a 20-0 lead in the first half.

Quarterback Tristan Calhoun tossed a 20-yard TD strike to Keshaun Davis in the first half and a 26-yard scoring toss to Brooks Ellis in the second half. On the ground, it was James Polite who dashed 33 yards to paydirt for the first score of the game and Isiah Ash who galloped the same distance for the last points of the night.

In between, Neal Brenton picked off a Lakeside pass and returned it 55 yards for 6. The Hornets nearly had another pick six from Davis but a penalty negated his return. A.J. Todd made it three interceptions for the Hornets who not only held the Junior Rams to a net of 11 yards rushing in nine attempts and 22 yards passing (4 of 15), they did not allow a first down.

“It was good for our players to win big,” said Hornets coach Brad Smothermon. “We made mistakes we still need to work on but everyone got in a game against another team other than Bethel. Offense and defense looked good. When you score 36 and they score 0 that means all the boys played a real good game.”

Bryant White’s opening drive covered 62 yards and resulted in points. After a penalty negated a long run by Grayson Prince, Polite set said on his touchdown run to make it 6-0.

Dropped passes haunted the Rams in their first two possessions but they kept Bryant off the board on its second try.

Number three was a different story, however. Despite an 11-yard loss that had the Hornets facing a third-and-21 at their own 45, they managed to convert and eventually score. A pass interference penalty against Lakeside helped. Two plays later, Calhoun and Davis hooked up for the touchdown to make it 12-0 with 3:20 left in the half.

Lakeside got good field position thanks to a nice kickoff return by Michael James but a play into the possession, Brenton hauled in an overthrown pass down the left side and sprinted to the end zone, cutting back inside the 5 to just get in through a tackle attempt. 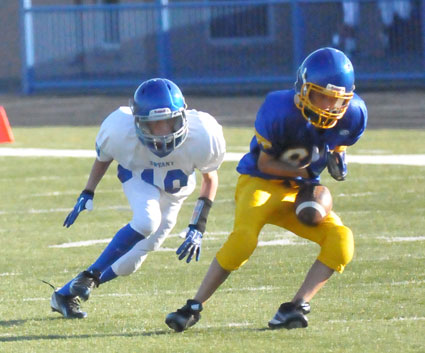 Bryant White’s Neal Brenton (10) breaks toward a Lakeside receiver. He would later intercept a pass and return it for a touchdown. (Photo by Kevin Nagle)

Calhoun added a run for the two-point conversion and it was 20-0 with 1:20 left in the half.

Lakeside got the ball to start the third quarter but, on the second play, Todd came up with his interception on a throw that Rams quarterback Adam Saveall had to rush because of the pressure from Bryce Thomas.

Though the Hornets suffered their first turnover, a fumble, after they’d driven to the Lakeside 41, the defense forced the Rams to punt.

The result was Bryant’s worst field position of the game and it resulted in the Hornets’ lone punt.

But, again, Lakeside didn’t have the ball very long. On a second down, Davis plucked Saveall’s throw out of the air and rumbled 26 yards to the end zone only to have the penalty leave the Hornets offense 36 yards from another score. After picking up a first down via a pair of Lakeside penalties, Calhoun passed to Ellis in the flat and he turned it into 6. 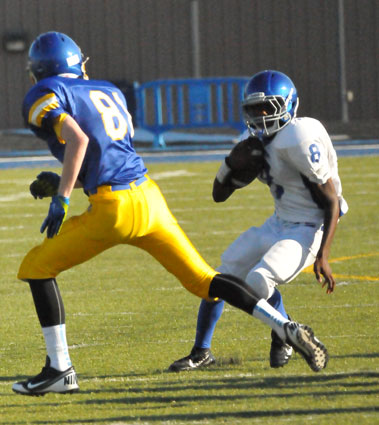 Bryant running back James Polite (8) cuts back to avoid a Lakeside defender. (Photo by Kevin Nagle)

Calhoun’s pass to Aaron Griffin produced the two-point conversion and it was 28-0.

The Bryant reserves kept up the defensive effort, forcing a Lakeside punt and when the kick went into the backside of one of the Rams’ upbacks, the Hornets gained possession at the 33. Ash scored on the very next play and, with Brandon Hill’s run for 2, the final score was on the board with :53.5 to go.

Calhoun wound up hitting 4 of 9 passes for 65 yards. Polite and Prince each picked up 44 yards on the ground. 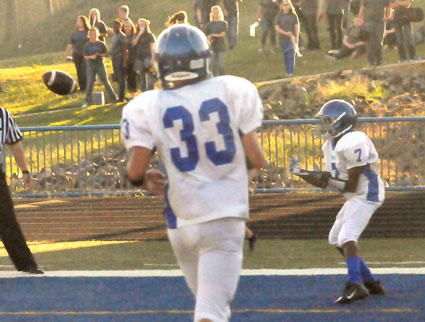 Aaron Griffin (7) prepares to haul in a pass on a two-point conversion in front of teammate Brooks Ellis (33). (Photo by Kevin Nagle)