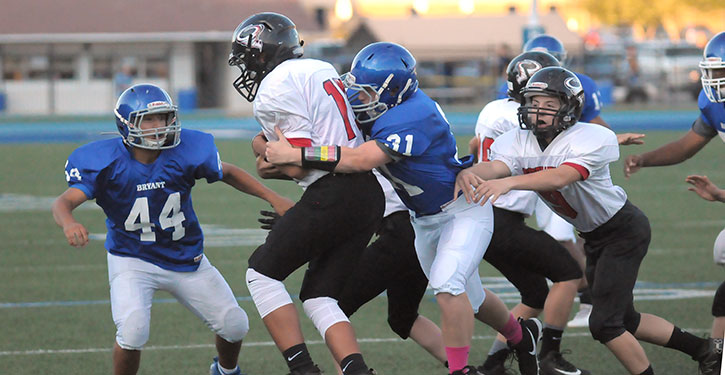 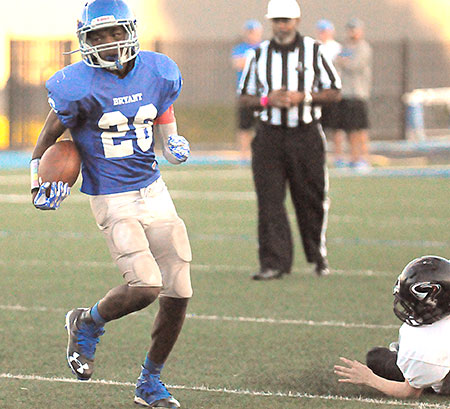 Robert Hendrix (26) turns the corner past a Russellville defender. (Photo by Kevin Nagle)

It appeared the Russellville Whirlwinds’ receiver Ty Hipps was going to score. After hauling in a long pass from quarterback Gavin Graham, Hipps was end-zone bound. It looked like the Whirlwinds were about to cut the lead of the Bryant White Hornets eighth grade team of Bryant Middle School from 32-18 to 32-24 or maybe 32-26 late in the third quarter.

But Hornets’ safety Gavin Burton never gave up on the play and hauled Hipps down at the 1. That proved crucial when, on the next snap, Russellville’s Brett Wilbers fumbled and Bryant’s Will Diggins recovered at the 11.

The Hornets added a clinching touchdown in the fourth quarter when quarterback Pierce Kinley broke a 48-yard run for a score, his third of the night, that, with his run for the 2-point conversion, set the final score, 40-18. 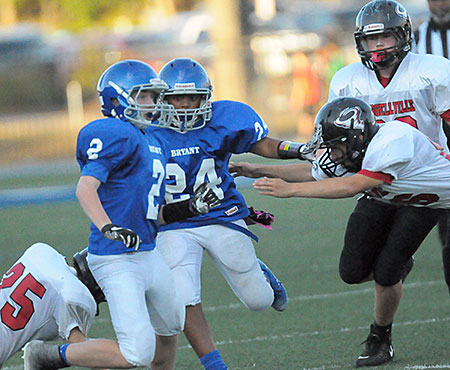 It was a highest scoring total of the season for the Hornets who came in off a tough 16-14 loss to rival Bryant Blue in the Hornet Bowl. The Whirlwinds caught the brunt of the Hornets’ frustrations.

Kinley ran for 139 yards on 15 carries and Daizure Hale added 79 yards and a score on just three tries. The scoring was also highlighted by Robert Hendrix’ 70-yard run to the end zone on the kickoff that opened the second half.

The win improved Bryant White to 3-3 on the season going into their final two contests. The Hornets will host Conway White on Thursday, Oct. 26, before finishing their season at North Little Rock on Tuesday, Oct. 31. 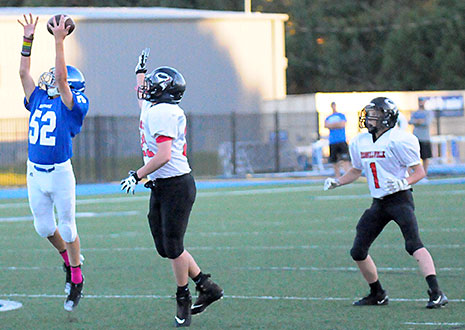 Bryant White forged the victory despite Russellville’s 270 yard passing as Graham completed 15 of 26 for 259 yards and three touchdowns.

But the Whirlwinds could not get anything going on the ground. They picked up just 28 yards on 15 plays, seven of which resulted in lost yardage as the Hornets refused to be blocked. The first loss for Russellville was on the second play of the night when Graham couldn’t gather in a bad snap. He fell on the ball but lost 10 yards. A play later, Graham punted.

The short kick set up a short field for Bryant on its first possession. Keyed by Hale’s 37-yard gallop, the Hornets cashed in. Kinley scored from the 2 then Hale ran in the conversion to make it 8-0. 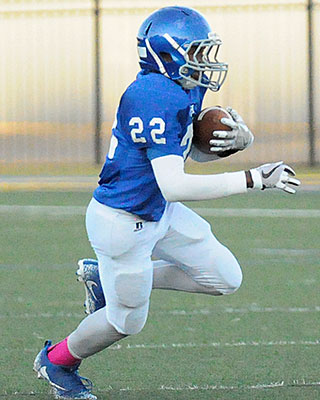 Russellville got on the board moments later. Graham completed passes for 15 and 36 yards to Damon Donoho, setting up a 19-yard touchdown strike to Eli Toland.

The Whirlwinds went for a tie but Graham’s pass on the two-point conversion was picked off by Cameron Booth.

On back-to-back plays on the next series, Hendrix and Kinley rambled for 28 yards apiece. A play after his keeper, Kinley scored again, this time from the 3.

With a little tackle-eligible play, Kinley passed to Turner Seelinger for the conversion to make it 16-6.

In turn, the Hornets forced a punt but the return was undermined by a fumble that Russellville recovered 30 yards from a score. Graham passed for 7 yards to Latrell Thomas on first down but, on the next snap, Diggins dropped Thomas for a loss.

Two incomplete passes followed and the Hornets took over on downs at their own 27. 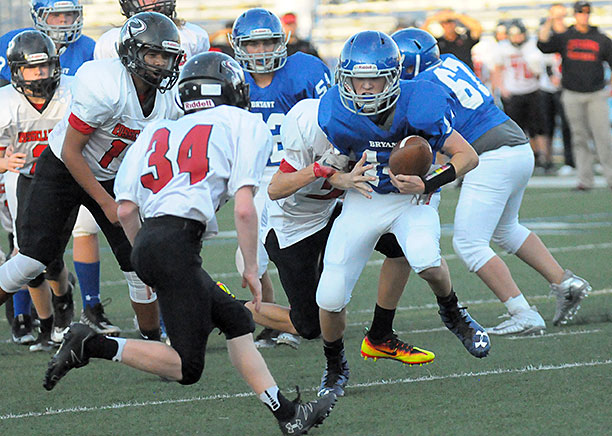 Kinley lost 9 yards on the first play of the possession but, on the next snap, Hendrix rumbled for 24 yards.

But Bryant White got into a bind with a pair of losses and a penalty. Facing a third-and-18 at their own 32, Kinley kept and scampered 32 yards to convert. On the next play, a jet sweep to Hale, they scored. Hale sailed 36 yards and, with Hendrix’s two-point run, it was 24-6.

With just 1:21 left in the half, Graham went to work again. His 10-yard scramble was followed by a 50-yard completion to Hipps. From the 5, Hipps hauled in the touchdown pass from Graham and it was 24-12.

A fumble with :22 left gave Russellville a chance to draw closer but Booth made an interception at the goal line to foil the threat.

And when Hendrix returned the second half kickoff for his TD and, on another tackle-eligible pass from Kinley to Seelinger, they added a two-point conversion, the Hornets were ahead 32-12.

Gamely, the Whirlwinds answered with a 63-yard drive. Graham was 7 of 8 through the air on the march capped by a 9-yard throw to Carson Smith for the 6.

Russellville tried to kick an extra point but it was well off the mark, leaving it 32-18.

The Hornets went three-and-out, setting up the drive that was turned back at the 1.

The ‘Winds got another chance after forcing a Bryant White punt. With 5:13 left to play, they were 39 yards away from making it a one-score game. But they couldn’t overcome a pair of holding penalties. They turned it over on downs at the Hornets’ 37.

The final scoring drive began with Kinley’s 13-yard keeper and ended with his 48-yard jaunt. 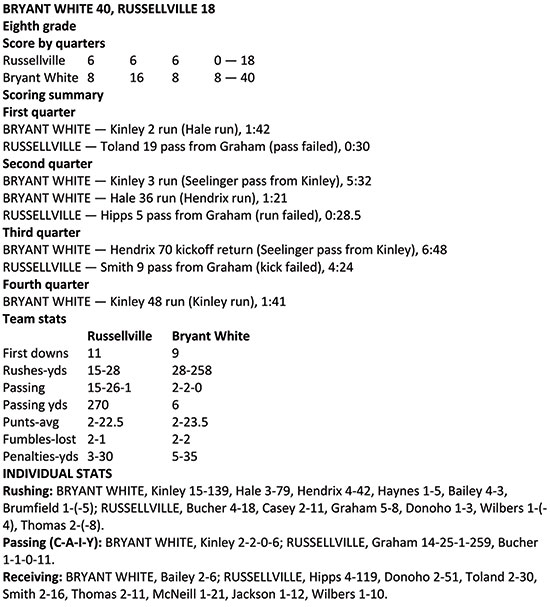