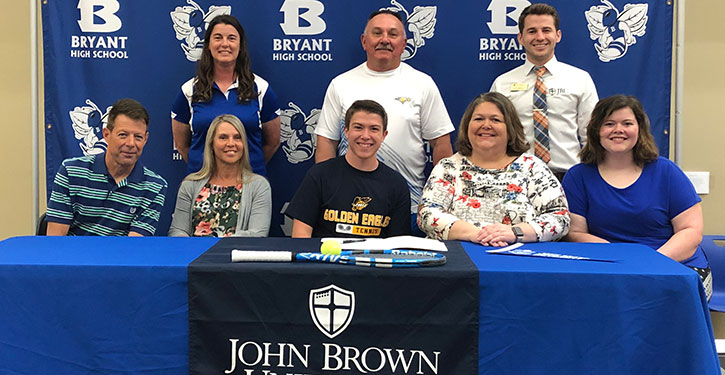 In the opening moments of the ceremony, Bryant High School tennis coach Angel Dale mentioned that there have been very few BHS tennis players that have signed to continue playing in college.

But then, there haven’t been too many as good as Blake Cunningham.

After playing his way into the Class 6A State Tournament last fall, Cunningham, on Wednesday, signed a letter of intent to continue his athletic and academic careers at John Brown University, a private, interdenominational, Christian liberal arts college in Siloam Springs.

“He’s a great kid,” Dale said. “They’re getting a good Christian young man that is going to be an awesome player. He works hard. If I could have 15 more like him, I’d take them.

“I was looking at U of A-Fort Smith, but I wanted a smaller school, so I found John Brown,” Cunningham related. “I started looking at JBU for tennis because they were in the division I was looking at. I went there a couple of years ago for a camp and it just felt like church camp. I went up there for a college tour and I got to meet with the coach, fell in love with the campus and fell in love with the team after that.

“When I went back this time, everything — there was no stress. It felt like home,” he said.

The son of Kim Cunningham, Blake said he plans to study Biology.

“They have a really good program,” he said.

Cunningham began playing tennis about seven years ago, after fifth grade and before sixth.

“Since then I’ve been dedicated to it,” he noted. “I’ve put in the effort. My whole goal in high school was to be able to sign my senior year. The one thing I was looking at towards college was where could I sign to play for?”

He said that became a focus during his junior season at Bryant.

“Whenever I advanced to day two of conference,” Cunningham related. “Once I advanced, I was like, ‘Okay, I have a chance.’ Then I just kept pushing and pushing and, my senior year, I ended up making it to State. That’s when I knew I didn’t want to just end my tennis career in high school. I wanted to keep pursuing it. And I knew I was at a good enough level to continue in college.”

At the conference match last fall, he admitted to kind of surprising himself with his play.

“In State, I played a lot better than I thought I would’ve,” he added.

“I think he did surprise me a little,” Dale acknowledged. “He wanted to make State and I knew that was going to be tough. But he was so determined that I was really excited for him when he did make State.

“I could see that he was that good,” she added. “I think him believing that he could do it was the big difference.”

Asked where he felt he had improved the most, Cunningham said, “Just my overall ability. I used to be one of the slower kids, but I started conditioning more and I’ve dealt with my speed, my endurance and now I just have a high stamina when it comes to playing. I don’t quit easily. I don’t give up. Even when I feel like I’m going to pass out, I keep going.”

As far as the best parts of his game, Cunningham added, “Physically, it’s my ground strokes on the baseline. But I’d have to say my best part is probably my attitude because of my coach (Rob Nankervis), whom I’ve had for seven years. He’s really emphasized having a good attitude on the court. So, even when I’m down, you’ve got to stay positive because the other guy will start to get down and that’s when you beat them.”

When he started, Cunningham took group lessons from Gail Nankervis.

“From there, I advanced from her group lessons to Coach Rob’s lessons and that’s who I’ve stuck with for all seven years.”

“She called me at the end of the day and said how her grand-daughter had played, how well she had played. But she also said, ‘There’s a boy out here and he was just a joy to watch. Not only because he played tennis so well but because he was much better than his opponent. But the way he encouraged his opponent, the way he treated his opponent with dignity was very special and unusual.’

“Sure enough, it was Blake,” Nankervis continued. “I knew right away when she said that it was someone special, I knew it had to be Blake.

“That’s an indication to me of the quality of Blake’s character,” he observed. “Blake is very humble, and I think that’s probably the character attribute most valuable. In tennis, Blake had become a ferocious competitor. Excellent tennis players have to compete ferociously for every point, like their life depends on it. And he knows how to do that. But he’s not lost the ability to have joy on the court and to have compassion and to be empathetic. That’s rare. Most people are either one or the other. They can’t compete hard because they’re too sorry for the opponent or they compete so hard that they lose the joy of the game. And they forget that the game is bigger than themselves.

“Blake is not like that,” Coach Rob asserted. “And that’s a tremendously good characteristic that he has. I want to encourage him to keep being that way. I’m really proud of him.”