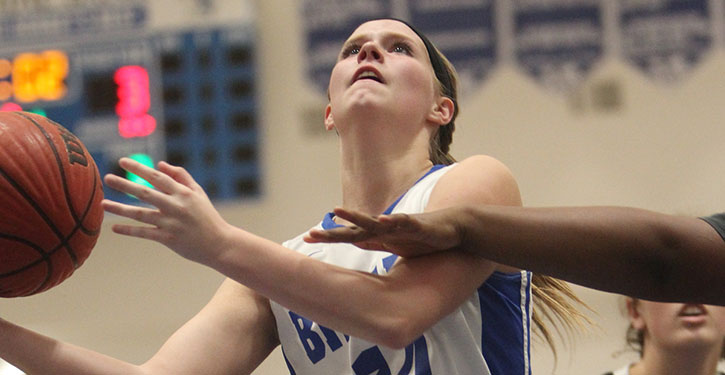 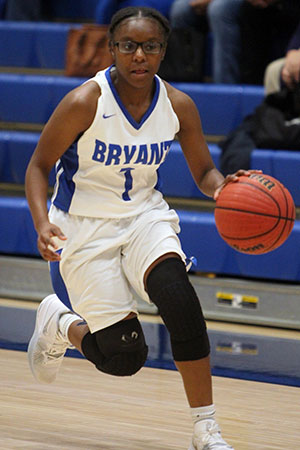 The winners were in white and blue, Bryant’s Lady Hornets as they hosted the black-and-red Maumelle Lady Hornets in a preseason benefit scrimmage.

Bryant roared to a 12-0 lead in the first four minutes of the first half and never trailed, finishing with a 29-13 advantage at the break. The scoreboard was cleared for the third quarter and Bryant, hitting four 3-pointers along the way, outscored Maumelle 18-11.

The two junior varsity teams played the final quarter and, with all the scoring coming at the free-throw line except a 3-point apiece, Bryant prevailed 10-9. Jaiyah Jackson’s free throw after a steal with :16 left, provided the difference-maker.

“I feel comfortable going nine, 10, 11, 12 deep,” said Bryant head coach Brad Matthews, adding of his players, “How that works out is really up to them. How they practice; the intensity, the purpose of which they practice. That goes a long way in how we’re going to rotate our kids in. That’s 100 percent on them. If they want to play more, they’ll practice with more purpose and practice with more intensity. And we do that now. We’ve had really good practices since school started.” 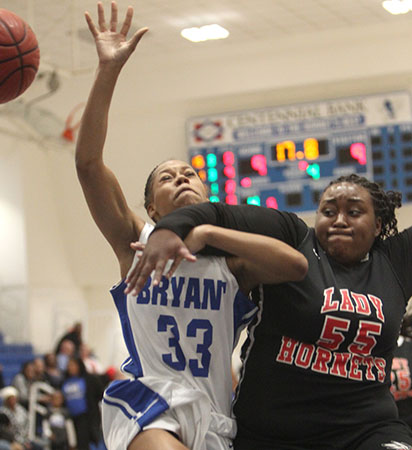 Jaiyah Jackson is fouled on the way to the basket. (Photo by Rick Nation)

In the opening half, Bryant forced 14 Maumelle turnovers and the result was 29 shot attempts to just 18 for the visitors.

The only problem for the hosting Lady Hornets were fouls. With Maumelle attacking the basket much of the half, Bryant committed 12 fouls.

“I think sometimes that was just a little too much ‘want-to’ and we got away from just being disciplined on defense, trying to get a few more steals,” Matthews observed.

“Overall, it was a good start,” he asserted. “I thought our defense, overall, was pretty good. We’ve got to do a better job on the boards. We gave up quite a few offensive rebounds in the first half. We’ve got to get that fixed.

“But it’s a benefit game,” noted the coach. “There are a lot of things — you look forward to watching the tape and picking out those things and we’ll go back to work tomorrow and start fixing some. 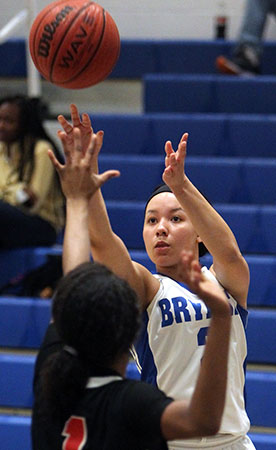 “We’ve had a good few months of practice,” he reiterated. “We just need to do what we practice. We don’t need anything above that and let’s not accept anything below that. Let’s just do what we do in practice and get better at that. There were some spurts tonight where we saw those glimpses of things that we can definitely build on. Obviously, it’s the first game and there’s lots of things we can go back and clean up.”

Bryant’s opening salvo began with a nice give-and-go featuring senior Robyn Gordon feeding Trotter for a layup. The play was set up by a turnover forced by Gordon and Celena Martin.

Muse made a steal and Martin cashed it in, following her own miss.

Another steal by Muse led to a layup for India Atkins.

After a Maumelle timeout, Atkins swiped a pass and fed Muse for a layup. And when Trotter hit a layup off an offensive rebound by Muse, it was 10-0. A layup from Walker capped the run.

Maumelle’s first bucket came on a 3-pointer by Alundra McMiller with 2:49 left in the opening quarter. 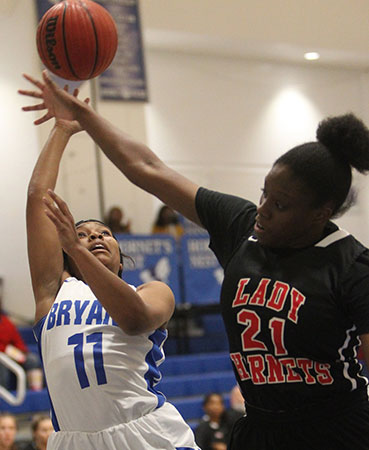 India Atkins (11) gets a shot away over a Maumelle defender. (Photo by Rick Nation)

It was 15-7 at the break. Atkins accounted for the first bucket of the second stanza and from there, Bryant maintained a double-digit lead.

The largest margin was the 16-point difference at the end of the quarter.

In the third period, Maumelle led 5-3 when the Lady Hornets’ 3-point barrage began. Trotter hit the first one then so did Walker. Lexie Taylor canned one to make it 12-5. Ivory Russ pitched in with a conventional three-point play off a drive to the rack then Walker splashed another triple to make it 18-5.

The Lady Hornets open the season officially on Tuesday at 6 p.m., against the host Lady Wolves at the Lake Hamilton Classic. 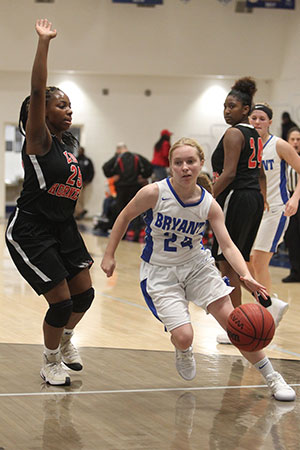