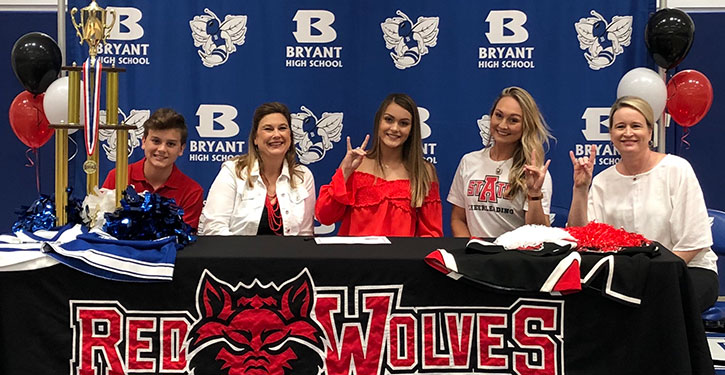 Bryant’s Ouellette proves to be just what ASU needed

Arkansas State University cheer coach Paige Pauley realized she was a little short at the back spot on her squad for Fall 2019. And she was grateful that one fell into her lap.

Grace Ouellette, daughter of Beth Ouellette, starred for the Bryant Lady Hornets at the position but it didn’t look like she’d be the one helping out Pauley.

“Back in the winter, just thinking about where I wanted to go, it was here (ASU), or another school and I wound up choosing another school,” she related. “I went to the school. It’s a big SEC school. I tried out and I didn’t make it.

“I have a friend that’s on the (ASU) team who suggested — A-State had already had tryouts — that I e-mail the coach because this was my other choice,” Ouellette continued. “I was like, what can it hurt? So, I e-mailed the coach and asked if there were any positions. She was just very willing and very eager to talk with me.”

“Once I saw her videos, I felt, for sure, she’d be a great asset for our program,” Pauley said Wednesday. “Not only are her skills amazing, we were definitely short back spot this year, so it was kind of a blessing that she actually reached out to me when she did.”

Pauley was in Bryant to witness Ouellette celebrate signing a letter of intent to continue her cheerleading and educational careers at the Jonesboro school.

“We’re very, very excited for her to represent, not only Bryant High School as her alma mater, but also the Arkansas State University cheerleading program,” Pauley said.

“I just feel like it’s really kind of a gift from God, that He was pointing me in the direction that I needed to go instead of where I chose to tryout initially,” Ouellette said. “So, I’m just really excited that I have been pointed in this direction. I’m excited to join this team this year.”

“Fantastic back spot, wonderful tumbler,” she added. “She worked so hard this year to get her full and she got it. She’s a very goal-oriented person. She sets her mind to something and she’s going to achieve it.”

Ouellette helped the Bryant varsity squad to a runner-up finish in State her freshman year. In her sophomore year, BHS won Nationals.

“I’m really good at the position I am, when I’m starting in a good back spot,” Ouellette acknowledged. “I have good tumbling too. I met further than the requirements she (Pauley) asked for but, other than that, probably being a back spot.”

Her career began after she started tumbling in the fifth grade.

Ouellette added, “To be completely honest, when I started, this was really not — well, not not my choice really — but my parents really, they were like, ‘You need to try cheer.’ They pushed me to go out for cheer. So, I did and ended up creating a really deep bond with what I do.

“I love what I do,” she continued, “and I was eager to continue to progress and get better. And that’s what I did. I was continually in the gym, continually trying to work and get better and, really, in the last two years just worked really, really hard, was in the gym every day to get where I needed to be to cheer at the collegiate level. That was really the drive to get where I am right now.”

Beyond the work and the achievements, Ouellette said, “I enjoy making friendships on the team. I’ve just created life-long friendships just from my team here in Bryant and I know I’ll make many more going to A-State. I’ll start making new friendships as I join this new school.”

Of her academic plans, she said, “I will be majoring in broadcast journalism up there then, from there, I would like to go on and pursue meteorology. I’d like to do broadcast meteorology once I get out of college.”

So, one day, you may be watching your local news and they’ll say, “And now for our local forecast, here’s Grace Ouellette . . . “