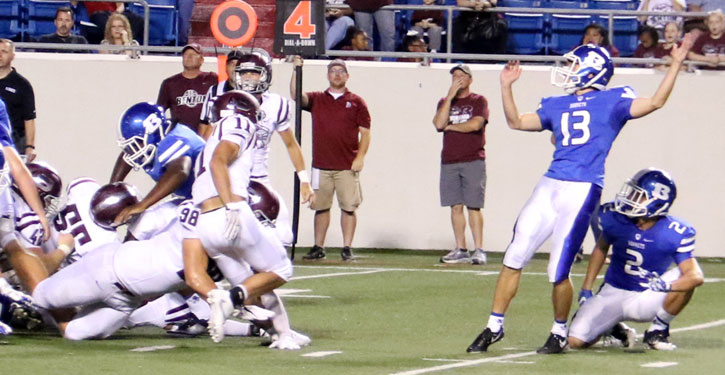 LAS VEGAS, Nev. — Bryant’s record-setting kicker Hayden Ray has been chosen as one of the three finalists for the 2016 Chris Sailer Award.

Ray led the Hornets in scoring with 92 points including a state and school record 19 field goals. He also tied the school record for longest field goal at 49 yards, made all 35 of his extra points and missed just three field goal attempts. He also averaged 35.5 yards on 68 punts and had 24 touchbacks on 65 kickoffs.

Other finalists include Brandon Ruiz of Gilbert, Ariz., and Jake Lane of Park Crossing High School in Birmingham, Ala.

The winner will be selected by the Awards Committee and presented with the trophy on Friday, Jan. 13, at 7 p.m., at the Sun Coast in Las Vegas.

The Chris Sailer Award is presented, on an annual basis, to the best national high school placekicker for that given season.

The National Placekicker of the Year is named in honor of Chris Sailer, who was an all-American for Notre Dame High School (1993-1995). In 1994, he set the national record for most field goals in a season with 22. Of those 22 field goals, seven came from beyond 50 yards.

Sailer, who now instructs kickers, was rewarded with a full ride scholarship to UCLA in 1995. He went on to earn All-American honors as both a placekicker and punter at UCLA. He was a Lou Groza Award Finalist in 1997 and set multiple records while at UCLA including longest field goal of 56 yards (still stands). He was signed by the San Francisco 49ers and went on to enjoy a 7-year professional career.