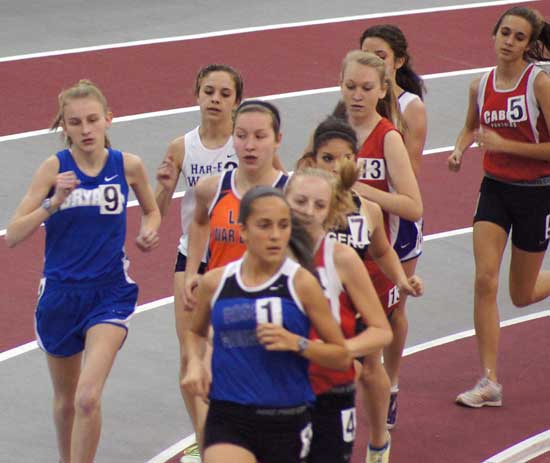 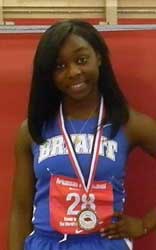 The Lady Hornets finished with 44 points and a lot of individual hardware. Fayetteville won the team title with 112 points, outdistancing a field of 21 teams at the meet held at the University of Arkansas’ Tyson Track Center. Bentonville took runner-up with 61 points followed by Cabot (51) and Bryant, followed by Crossett (40), and Rogers (38).

“I was really proud of Alexis,” said Lady Hornets head coach Danny Westbrook. “She got a terrible start and was behind the girl from Fayetteville the entire race, but she stayed focused and beat her to the line off the last hurdle.”

Even though she won a state title in her very first event, Royal was far from done as she led the Lady Hornets with 24 points. She took third-place finishes in the long jump (17’5”) and the triple jump (37’1”) and ran the first leg of the 4×400 meter relay that finished second.

In the last event of the day, that 4×400 relay team consisting of Royal, Fenice Boone, Leah Ward, and Melinda Murdock turned in a gutsy performance by running neck-and-neck with defending champion and state record holder Bentonville. Bryant led the stunned Lady Tigers throughout the race and only succumbed at the very end with Bentonville taking the title in a time of 4:07.4 to Bryant’s 4:07.7. 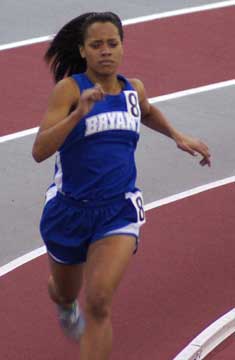 Boone, a freshman, set a new Bryant Junior High School record in the 400-meter dash with her fifth-place finish of 1:00.9.

The Lady Hornets had a total of four athletes receive Arkansas All-State status, which is automatically bestowed to any of the top three finishers in individual events or relays.

“I thought our team overall did an outstanding job,” Westbrook said. “We had several girls step up and go above and beyond what I thought they could do. Alexis just had a phenomenal meet and even though they didn’t get a medal, Gabby Allen, Anna Smedley, and Mekaylah Muhammad all won their respective heat races.

“I would like to congratulate Coach Keith Dale and Coach Beth Solomon on a job well done running off the two-day state championship meets,” he added. “Coach Dale is the indoor state championship meet director for the Arkansas Track Coaches Association and Coach Solomon runs the timing and scoring computers for the meet. They are also doing a great job coaching our sprint group and jumpers.”