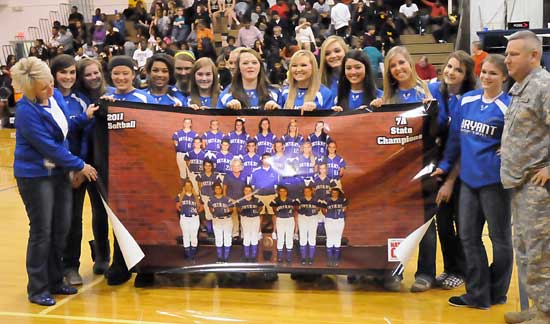 At halftime of the Bryant Hornets basketball game against the Little Rock Central Tigers Friday[more] night, Sgt. Daily on behalf of the Arkansas National Guard presented a poster commemorating the 2011 Class 7A State championship to the Bryant Lady Hornets softball team and head coach Debbie Clark. The State title was Bryant's second in a row and, this spring, they'll host the State Tournament at Lady Hornets Field and Bishop Park. The poster, along with a similar one from their 2010 title, will be part of a display at Lady Hornets field.