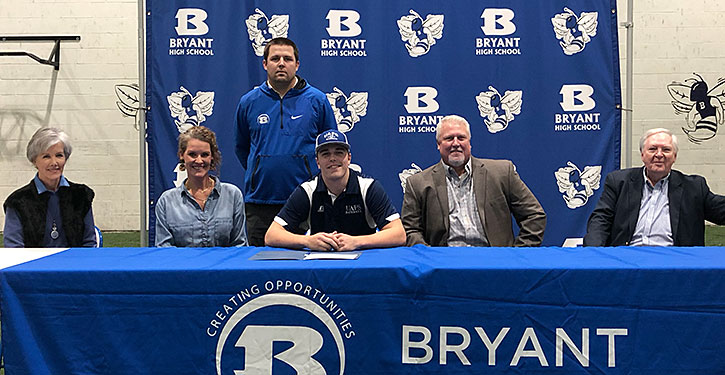 As a sophomore for the Bryant Hornets baseball team, Cade Drennan was in the running for playing time on the varsity. His preseason hitting had impressed head coach Travis Queck.

But when the season got underway, Drennan scuffled. He didn’t have much luck at the plate early and his playing time became limited to JV games.

But something clicked for him that summer. Playing for the State champion Bryant Black Sox Senior American Legion team, Drennan led the team with a .402 batting average (49 of 122) with 28 runs batted in, eight doubles and 20 walks.

Really, I just got tired of getting out,” Drennan explained. “I was pressing really hard. I was trying to do way too much. So, I just decided to relax and do whatever came natural to me. And hard work, that’s a given. You have to work hard to be good at anything.”

Hornets head coach Travis Queck saw more than that, however.

“His attitude,” he said, “and changing what drove him. He really attacked it last year.”

The subsequent success, mentioned above, has Drennan, the son of Bill and Melissa Drennan, primed for a great senior season this spring, and has landed him a scholarship to continue his academic and athletic career at the University of Arkansas-Fort Smith next fall.

Regarding Drennan’s breakout for the Hornets last spring, Queck recalled, “We had a guy that was coming back as a junior that year (Jake Wright) that was Mr. Reliable. And his senior year, Cade allowed us, with his play in the preseason and his workouts and everything, to move that young man to the outfield, to give us another bat in the lineup and not lose anything defensively.

“It turned out good for us, going 27-5 — obviously, the ending wasn’t what we wanted — but it was all him,” the coach said. “Like I tell these guys, it’s always them. I can give you the information and I can give you the opportunity, but you have to take advantage of it, go do it. He finally did that.”

“I’ve always been good at hitting,” said Drennan, who has been in the Bryant baseball program since he was 4 or 5. I started catching when I was 8. Before that I don’t even think there was a catcher, but I just played first. I actually tried to get out of catching at one point. I just wanted to play third.

Asked what he liked about it, Drennan said, “Just having control of everything. I mean, I get the ball every single pitch. Other places got kind of boring to me.”

“Cade is a very talented catcher,” Queck said. “Not only that, he could play a corner infield position. The guy’s got an absolute cannon of an arm. Strong arm, good footwork — he’s got some mechanical things he can fix as far as the throwing technique, but I’ll tell you right now, for the last three years, we’ve been raving about him and last year he put it together on the field.

Queck looks for Drennan to be one of the team’s leaders.

“I need him to be a leader,” he emphasized. “And that position right there, you’ve got all eyes on you. Everybody faces the catcher. So, you are the quarterback. You are the extension of the coach.

“I need him to be more vocal and to take control of the game,” the coach added. “Understand the situations, understand when you can take chances on runners, and what pitches we need to throw. And come back and give me information and feedback based on that last past inning.

“I think he’s got the capabilities and I look forward to seeing him grow January and February then seeing him producing March and April and May,” Queck said.

The coach wants to see more consistency at the plate from his catcher.

“And be able to use more of the field,” he continued. “I can tell you, in our workouts so far, he’s definitely put an emphasis on that stuff. He hasn’t lost his strength. It’s going to be a fun year for him if he continues on this path.”

It was a Legion connection that pulled Drennan to UAFS.

“When we started playing Legion ball after my freshman year,” he explained, “Ozzie Hurt was coaching and Dylan Hurt was on the team. They became some of my best friends.”

Both Bryant alums, the Hurts are now involved in the UAFS program.

“I just thought it was a great fit, a bunch of older guys from here went there. That was pretty much it,” Drennan added.

“I only went on one other visit because I was pretty sure that I was going to UAFS. I went to Crowder (Junior College in Neosho, Mo.) but it just didn’t seem to be the right fit for me.”