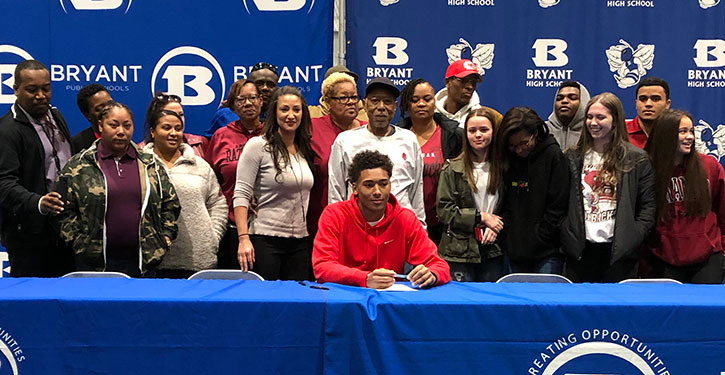 Throughout the annals of Bryant High School athletics, the name Wallace crops up over and over. It’s a legacy.

One that rests well on the shoulders of Bryant Hornets’ linebacker Catrell Wallace who, on Wednesday, signed a National Letter of Intent to continue his education and football career on scholarship at the University of Arkansas in Fayetteville.

At 6’6”, 215-pounds, Wallace has started for the Hornets for two years and has been a key player for the Bryant High School basketball team. He helped the Hornets earn their first football State title in 2018 then helped the basketball team reach the State finals for the first time in over 25 years in early 2019 before leading the football team to a repeat title this fall.

Wallace was third on the team in tackles with 60 including 26 solo stops. He had a sack and six tackles for loss, broke up four passes and, on special teams, blocked four punts.

“You know, when we talk about tackles on our staff, the numbers are really not that great, but you’ve got to remember these guys only played for a half in 10 games,” said Hornets head coach Buck James, referring to the fact that Bryant won 10 of its 13 games by mercy-rule. “So, the stats don’t always speak to what the players are or what they did for us.”

“I got him for basically two and a half years,” said Hornets linebacker coach Travis Queck. “We started him out on the d-line as a d-end and (former defensive coordinator) Coach (Darrell) Burnett, at the time, moved him back to linebacker. We looked at him on the outside.

“That ranginess that he had, the athleticism that he had, all it took was a little bit of development and growth and understanding,” Queck added. “Once he got that, he was an extension of us on the field for two years. Getting guys lined up, being a leader which Catrell did a good job of turning into.”

“He could be a guy that goes down to be a defensive end or could possibly be an inside linebacker,” James said. “We’re excited about the possibilities for Catrell and how he grows and develops as a big-time football player.”

“We started playing (football) on a Little Rock team,” Wallace recalled. “I think it was in the fifth grade. I loved it the second I got there.

“I started playing flag football and they told me they were going to tackle football practice,” he recalled of his teammates, which included cousin Nate, a former Hornet now playing at Harding. “I snuck off with them to go do it because my grandparents wouldn’t let me play (tackle) right then. And I made the team. I started at multiple positions and from my first game, I knew I loved it.”

“I went up there for a game and they offered me,” he related. “After the season, I had a couple of other schools offer me full rides. But I’ve always wanted to play in the SEC. Getting the offer from Arkansas, that was just automatic go-to. It’s mainly been Arkansas. Just the competition in the SEC. That’s the highest level of college football.”

Along the way, however, there was a change at the helm of the Razorbacks. Head coach Chad Morris and his staff was fired after a rugged 2019 season. Sam Pittman, a former Arkansas assistant who had been coaching as an assistant at Georgia, was hired along with a new defensive coordinator, former Missouri head coach Barry Odom.

“I really liked Coach Morris,” Wallace said. “He’s the one who offered me. Him not being there, it made me rethink my decision. But after talking it over and thinking about it, I still wanted to play for the University.

“I want to play linebacker,” he mentioned. “I’ll probably end up playing defensive end and linebacker, a hybrid position. They haven’t really said what their plans are for me yet. I like being able to make plays both forward and backwards on the run and pass. But I’m just going to play whatever they put me at.”

Regarding the Hornets’ back-to-back State titles, Wallace said, “Last year, that was a real competitive team that we had, with a bunch of big-name seniors. Nate, he taught me everything I basically know about football. I grew up playing with him. Then, this year, being one of the leaders on the team, that means a lot, being able to lead my team to back-to-back State championships. It feels good.”

And no doubt, it would feel good to be part of the group that returns the Razorbacks program back into the power it once was.