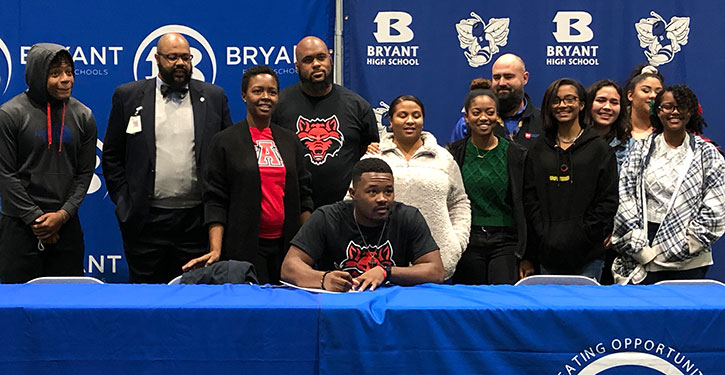 Rushing or tackling, Adams ready to play for Red Wolves

At 6’1”, 235-pounds with speed, Ahmad Adams is one of those running backs that can run past you or through you. He could move the pile or run right past it.

Adams was no fun for Bryant Hornets’ opponents to try to tackle in 2019 when, in just 137 carries, he rushed for 1,032 yards while sharing time with junior Tanner Anderson.

His size made him a truly unique running back. It was actually more indicative of an inside linebacker and, as a junior, when senior starter Jakob Neel was out of action, that’s exactly where the Hornets’ coaches moved him.

And it’s right where the Arkansas State University Red Wolves’ coaches project him in their program as, on Wednesday, Adams signed a National Letter of Intent to continue his education and football career at the Jonesboro school.

“He really only played in a half for most games,” James mentioned. “I think one game he only had four carries and he had 100 yards. He has a lot of potential. I think the sky’s the limit. We’re very excited to have him be able to do this.”

“It’s a great feeling,” said Adams, the son of Kimberly Smith and Thomas Stone. “I don’t have to worry about going into debt or anything like that. It’s a great opportunity.”

“Ahmad is a great kid, has a great work ethic,” said Hornets assistant coach Adam Pendergrass. “I think his best football is ahead of him.

“The things that he did for this program, what he brought to the table every day, leadership — not a vocal leader but a work-ethic leader — there’s some things that he’s really gifted at physically,” he added, “but mentally and the work-ethic thing, when you get it all together, that’s why you get Ahmad going to Arkansas State. Just a great kid.”

“I started playing when I was 7,” Adams related. “My first year of playing I didn’t really know what was going on. I don’t remember being out there very much. But I really enjoyed it, enjoyed the feeling, the rush. I was like ‘I can do this for a while.’ I liked it a lot.

“The coaches had to teach my how to hold the ball,” he recalled. “That was my biggest problem, holding the ball and running using my hands. Once I got that down, I was a pretty good running back.”

I was supposed to be going to their camp, but I had like five other ones,” he mentioned. “I was really planning on going to another camp, but (ASU assistant) Coach (David) Duggan asked me again and I told him, “I’ll go to your camp.” So, I went and played out the best that I could and the next day they offered me.

“At the time, I really wasn’t considering most places,” he said. “I was just trying to think about the best place I could go.”

“It was just the people,” Adams said. “It kind of reminded me of the people here. It had more like a homey feel. I really enjoyed it.”

Said Pendergrass, “So thankful to get the opportunity to get to know him, get to coach him, get to be a part of his life. I think he’s got the best future ahead of him. Once he gets there, gets into a different environment, I think we’ve prepared him well with what Coach James does in the program for kids going to the next level.”

Adams embraces the plan to move back to linebacker.

“Getting back to the defensive side is a process but it’s one I really enjoy,” he said. “I really enjoy playing defense. I played middle linebacker last year so it wouldn’t be a big change for me, but I really enjoy the process of learning how to play linebacker, seeing the field from a different point of view.”

But if the Red Wolves needed him to run with the ball?

“I wouldn’t mind that either,” he allowed.