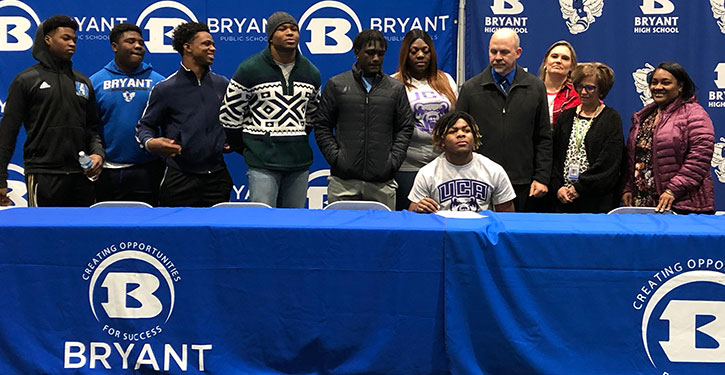 T-Bird set to fly to the football for UCA Bears

Those who had not watched the Bryant Hornets football team all season but attended the 2019 Class 7A State championship game, were a little surprised. They had seen all those gawdy scores, with the Hornets setting a new record for points in a season. But it kind of went under the radar just how good the Bryant defense was.

Surprised and impressed were those newcomers.

The thing is, the Hornets’s D set new school standards for rushing yards per game for the season, sacks, and fewest points allowed for 12- and 13-game seasons despite the first team being on the field for less than three quarters as they mercy-ruled 10 of their 13 opponents.

For anyone that saw the Hornets all season, they knew, few if any Bryant defenses had every been as physical or as sure in their tackling.

Truly a fine example of those things was 6’3”, 190-pound safety Tamaurion Wilson — T-Bird to most. As a junior starter, Wilson’s ability was obvious. But he probably wasn’t as consistent as the coaches hoped he would be. It was something he recognized, particularly in his tackling.

“Just continue working,” he said of his off-season. “I missed a lot of tackles (junior) year that I thought I could make so I was determined to get better.”

Senior year, there couldn’t have been more than a couple of missed tackles. He was as sure as anyone and would up with 41 stops including 24 solo tackles. He had three sacks, eight tackles for loss, eight pass break-ups, an interception and two fumble recoveries.

And, on Wednesday, Wilson, the son of Latonya and Demetrius Wilson, was awarded by signing a Division I scholarship offer to continue his education and football career for the Bears of the University of Central Arkansas in Conway.

“I was considering Southern Illinois,” Wilson allowed. “But UCA felt like home.

“They told me they were going to offer me during the summer,” he recalled. “They offered me Aug. 6, I want to say.”

“He’s a phenomenal guy,” said Hornets secondary coach and defensive coordinator Quad Sanders. “He knows what we expect as defensive coaches. He did a good job of leading the way.”

“He’s a guy who’s really going to do very well,” said Hornets head coach Buck James. “He played safety for us and they’re thinking he’s going to be an outside linebacker or dime or nickel back at the college level. We’re really excited about him having an opportunity.”

“I felt like I got a lot better over time and I became a leader over time too,” Wilson said of his development between junior and senior seasons for the back-to-back State champion Hornets.

“He’s an excellent leader,” Sanders emphasized. “He can tell you every position on the field, what they’re supposed to do. He’s phenomenal knowing what’s going on, recognizing formations better than kids in college do. In terms of what’s going to happen or where they’re going to run the ball, if it’s unbalanced — he can tell you immediately. He can get to a spot on the field that nobody else can get to.

“He had three sacks in State (playoffs),” the coach mentioned. “I really didn’t turn him loose until the last five games. He’d been begging me to do it forever but I kind of held back on that a little bit because we needed him over the top and not in the backfield.”

Looking ahead, Wilson said, “I plan on playing as a true freshman. (The ASU coaches) said I’ll play a hybrid, safety and outside linebacker.”