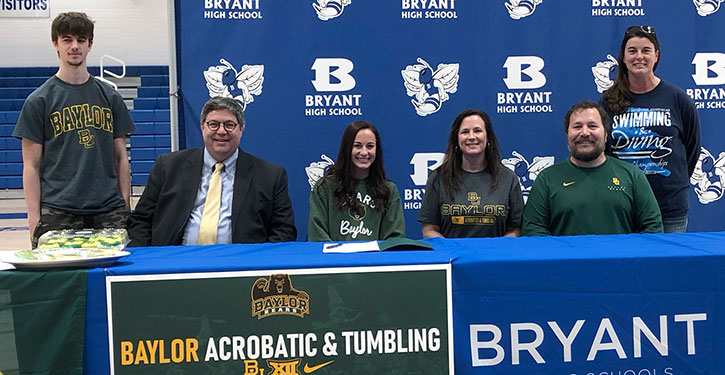 “I’ve always wanted to go to Baylor,” declared Bryant High School senior Sara Weber, a diver for the Bryant swimming and diving team since she was a freshman and a cheerleader, currently at Cheer City United in Little Rock, since she was 4 years old.

As it turns out, that athletic prowess and a lot of dedication and hard work has helped her make that dream come true.

On Monday, Weber, the daughter of Grace Ann Nordin and Jeff Weber, signed a National letter of intent to continue her academic and athletic career under scholarship at the Waco, Texas school.

But not as a diver nor as a cheerleader. The folks at Baylor wanted Weber to join their nationally renowned Acrobatics and Tumbling program, which is currently ranked number one in the nation and has won five National championships.

There was a time, Weber said, when she wasn’t aware of such a program.

“I saw a girl that I followed who was a really big cheerleader and she went to Baylor for Acro and Tumbling,” she related, “so that’s how I figured out what it was.

“I started following it and realized they had camps,” she continued. “So, I went to a camp. I didn’t know much about the sport. It’s a lot different from my cheer background. Acrobatics and tumbling is just a college sport. So, they recruit from cheer, gymnastics, acro, trampoline — a bunch of different sports but they all play into that one sport.”

Recalling the camps, Weber related, “I met a bunch of the coaches and they told me about the whole recruiting process. And I met a girl that was going through it at the time. She’s on the team now. I stayed in touch with her and she told me her experience.

“I went back to another camp and just really liked it,” she continued. “So, I stayed in touch with the coaches like sending them videos, sending them my test scores and stuff like that, just to see if they liked my skills.”

Apparently, they did because Weber was invited to make an official visit.

“That’s where I got to meet the rest of the team and I got to watch practices and stuff,” she recalled. “That’s where they offered me a spot.”

Still, working at both sports at the same time is a rare feat, something that takes a lot of effort and drive.

“Just being on teams with people I made friends with, that kept making me want to go back,” Weber explained. “And competing, it’s just really fun for me because I’m super competitive. I liked having the challenge.”

Cheering since she was 4 is one thing but diving?

“My friend (Caivon Crosby), who graduated last year, he dove and was also a cheerleader,” Weber related. “He just told me to come try it out. I use a bunch of my tumbling skills in my dives, and a bunch of like technique from cheer in diving.”

“This will be her fourth year of diving,” Dale acknowledged. “She started in ninth grade and fell in love with it. She did cheer for Bryant in ninth grade then she wanted to focus on her diving with us.

“She had some raw talent to start with being a cheerleader and, in gymnastics, they do the twisters,” the coach explained. “Those are the toughest dives. But Sarah’s a natural twister so that helps her a lot. She’s really grown over the years. Her height is better. Her confidence is a lot better as she’s learned new dives.”

Weber finished a close second at the conference meet as a junior in 2018, just missed the cut for State.

“She came within one point of breaking our school record last year,” Dale mentioned. “So, we have a big goal to break that record this year and make it all the way through to the finals at State and place somewhere in the top five.”

“I plan to do that this year,” Weber declared. “I’ve just got to work on perfecting my dives. I have pretty good difficulty, but I’ve just got to clean them up. I think I can get there.”

Hard work and technique will get here there, Dale said, “So, the technique we work on, we have some different drills we do when we come in, that help us with that. Just the drill work, it’s a lot of technique but you also have to have the confidence and you’ve got to not be afraid if you smack the water and you mess it up.

Weber cheered in the Bryant school program through ninth grade.

“It’s not that she didn’t like cheering for the school, it’s just it fit better with the diving schedule,” said Dale.

“The schedules actually work out pretty well, especially since cheer isn’t at school,” Weber explained. “So, when I go dive, it’s seventh period and a little bit after school. Like today, when I have cheer practice, I’ll have dive practice until 4 then I’ll go home and have cheer practice. Competitions don’t run into each other because cheer competitions are weekends and dive meets are during the week.”

She said she’s been at Cheer City United for six or seven years.

“It’s different from school cheer because we don’t cheer at games or stuff like that,” said Weber. “It’s all just competitive. Last year, I was on the highest level, which is 5, and we competed at Worlds. I’ve been to Worlds, I think, three times. This year, I’m on level 5 again but the levels have changed so it’s like the second highest. So, this year, we’ll go to U.S. Finals.”

Regarding the Baylor program, she said, “There’s 50 girls on the team and 28 compete at one meet. The Baylor head coach doesn’t do seniority or anything, it’s just if you have the skills you’re going to compete.

“Before every meet, she’ll come into a practice and she’ll announce all the 28 that she’s picked to compete that meet,” she continued. “If you’re not in the 28, she tells you what you need to work on to get there. So, even if you’re not competing, you always have something you need to do. It gives you something to work for to be able to compete.”

Academically, Weber has her goals set as well.

“I want to be a forensic psychologist, so I’ll major in psychology and minor in forensics,” she stated.

“She’s definitely a hard worker and we’re going to miss her when she’s gone,” Dale said. “She’s a good team leader. She’s helpful with the other divers. The Baylor team will love having her.”