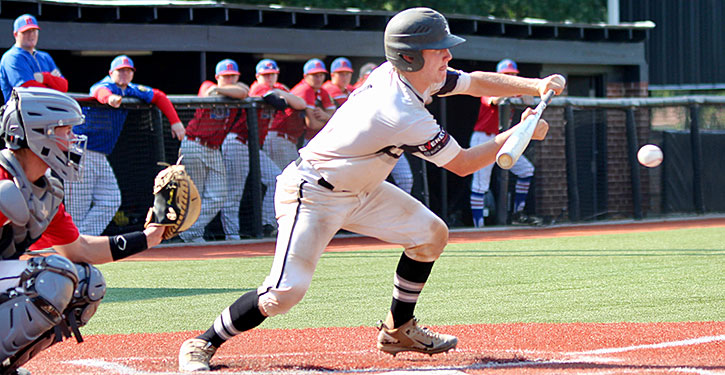 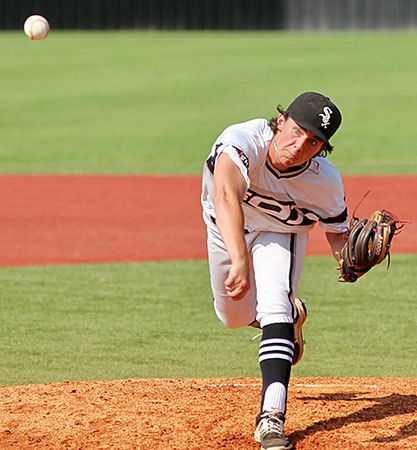 CONWAY — Right-hander Myers Buck retired the first eight batters he faced on Saturday and wound up with seven shutout innings against the Russellville Patriots. With a shutout inning of relief from each Beaux Bonvillain and Boston Heil, the Bryant Black Sox blanked an opponent for the second game in as many days in a 6-0 win.

The Sox, now 30-5, will play a winners’ bracket semifinal against Cabot Centennial Bank on Sunday at 4 p.m., at Warrior Field on the campus of Hendrix College.

Saturday’s win came at Bears Stadium at the University of Central Arkansas. Cabot survived a 12-inning battle with Paragould Glen Sain late Saturday night, 7-5. Cabot is one of only two Arkansas teams that has defeated the Sox this season. On June 7 at Cabot, the Bankers edged Bryant, 3-2. 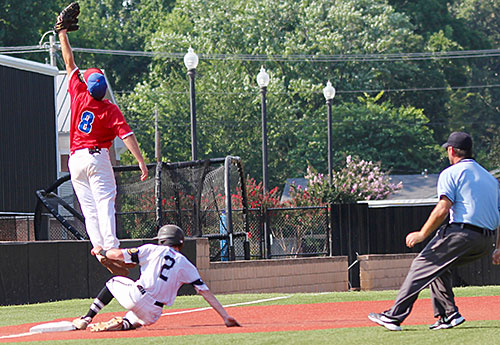 Matthew Sandidge had three hits in Saturday’s victory. Logan Allen, who came within a home run of hitting for the cycle in a 17-0 win over Mountain Home Lockeroom on Friday, had two more extra-base hits against Russellville. Seth Tucker had two knocks as well.

Buck didn’t allow a hit until the fourth inning when Jacob Sharp plugged the gap in left-center for a lead-off double. Bryant’s right-hander threw 96 pitches in his seven innings of work. He struck out six and walked two. At one point, he retired 10 in a row with the help of his teammates on defense. 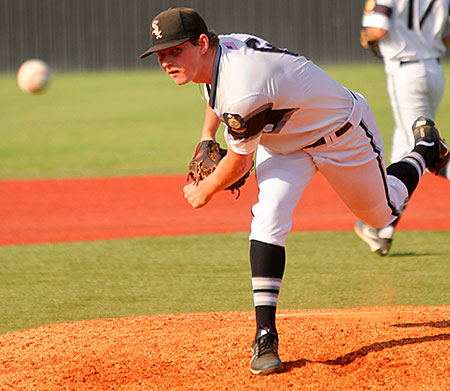 Bonvillain was seeing his first action of the summer after working through the requirements of the UCA program, which he will join as a freshman this fall. He showed no negative effects of the layoff from competition. Entering in the eighth, he struck out the first two he faced and induced a fly to Jake Wright in left to close it out.

Heil started the ninth and surrendered a bloop single to right by Sharp then walked Carter Thessing. But the next batter hit a grounder to Tucker at second that turned into a doubleplay. A strikeout of Michael Mullen ended the game with Sharp still standing at third.

The Sox, who scored nine runs in the first inning in Friday’s win, didn’t get away with as fast a start against Russellville lefty Greyson Stevens who retired the first four he faced then worked around a pair of errors in the second.

Russellville’s first base-runner came on a two-out walk in the third. In the bottom of the inning, the Sox struck for a 3-0 lead. Wright started the uprising with a single to right. Allen split the outfielders with a drive to right-center for a double then Jake East walked to fill the sacks for Tucker who picked up an RBI with a grounder to short which resulted in a force on East as Wright crossed the plate.

Dylan Hurt, Bryant’s clean-up batter, squeezed in Allen with a nice bunt. An error trying to throw behind Tucker at second allowed in to reach third. He scored on a wild pitch. 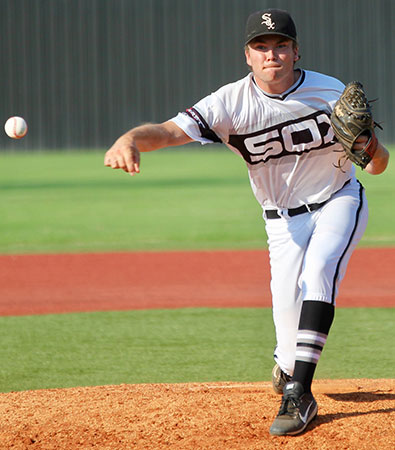 After Sharp’s double to lead off the fourth, Thessing walked. But Tucker made a nice play on a  grounder to second by Nick Hagerty, stepped on the bag and fired to first for a doubleplay. Buck fanned Mullen to keep it 3-0.

Sandidge smacked his first hit, a single, to right to open Bryant’s fourth. He took second on a passed ball, stole third and, after Scott Schmidt walked and stole second, Allen yanked a drive into the left-field corner for a two-run triple.

Russellville didn’t have another base-runner until a pair of two-out singles by Mullen and Stevens in the seventh. He got Brayden Myers to hit a grounder to East at short for an inning-ending force.

In the meantime, Bryant tacked on a run in the sixth. Schmidt singled and, with two down, so did East and Tucker to bring him around to set the final tally.