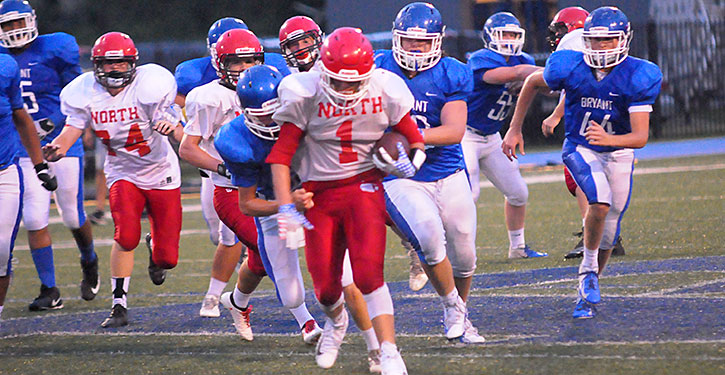 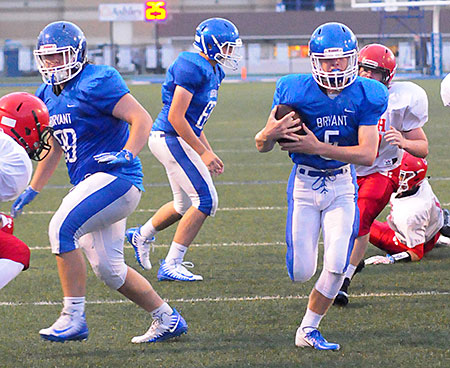 You can’t fall behind a Cabot football team. If you do, you better get the lead right back on the very next possession. Otherwise, you may never get another chance or, at least, not many.

The Bryant Hornets freshman team found that out the hard way on Thursday night at Bryant Stadium.

After leading 12-0 early, the Hornets found themselves trailing the Cabot North Panthers, 16-12 early in the second quarter. Bryant threatened to re-gain the lead twice before the end of the half but was denied.

And, in the second half with Cabot hogging the ball in their old dead-T offense, Bryant was limited to just three offensive snaps. In most frustrating fashion, Cabot North ran out the clock on the Hornets and won 16-12. 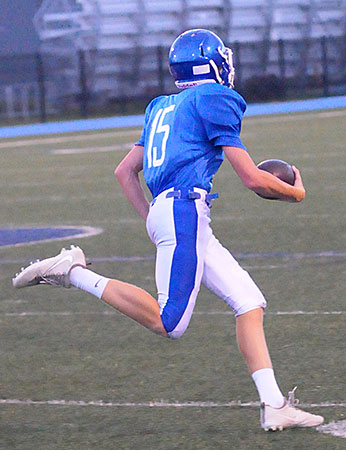 Blake Everett had a long return on the opening kickoff. (Photo by Kevin Nagle)

It was Bryant’s first game of the season after Marvell was forced to forfeit the opening game on Aug. 30.

The Panthers got the ball to start the second half and used up nearly the entire third quarter driving from the Bryant 45 to the 9. The Hornets’ defense made a stand and forced Cabot North to turn the ball over on downs at the 10 with 1:32 left in the quarter.

But Bryant couldn’t make a first down and was forced to punt.

A strong 48-yard punt by Carson Burnett pushed the Panthers back to their own 36 to start the fourth quarter.

The Hornets’ offense never got on the field again.

The defense had chances to turn aside the Panthers, who wound up converting three fourth-down plays. In fact, it looked like the Hornets had forced a three-and-out. Facing a fourth-and-3 at their own 43, the Panthers lined up to punt. 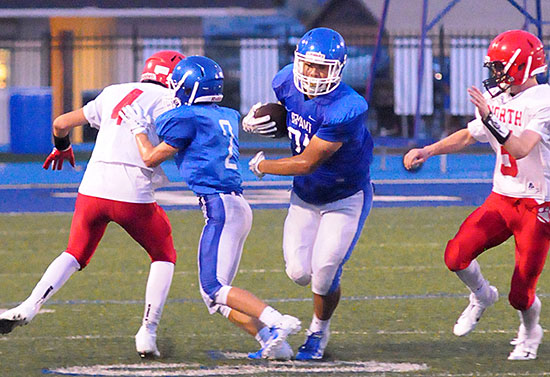 But they ran a fake. The snap went to the upback, Matt Oldham who handed off to Grant Fitch on a reverse sweep. He picked up 24 yards to the Bryant 33.

When the Hornets, led by cornerback K.J. Daniels, dropped Fitch for a loss on a third-and-6, it looked like they might get the ball back again. But, on one of just four passes Cabot North threw in the game, quarterback Caleb Perkins found Fitch for 14 yards to the Bryant 18.

But the Hornets continued to stifle the Panthers. Twice Oldham was stopped for a loss of one as Bryant started using its timeouts. Layton Dickerson saved a first down on a third-and-12 run then, facing a fourth-and-9, the Panthers took a timeout, just avoiding a delay of game penalty. 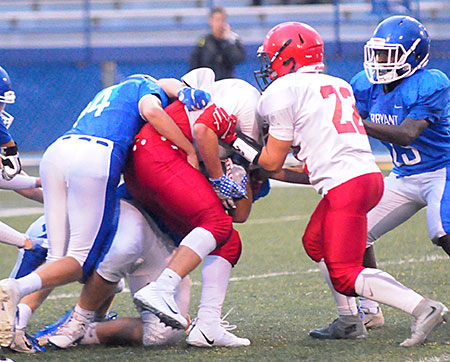 Again, they went to the air and when the pass fell incomplete at the goal line, it looked like the Hornets had held with just under two minutes to go. But a flag flew out and Bryant was hit with a pass interference penalty even through it didn’t look like the pass could’ve been caught.

That turned fourth-and-9 into fourth-and-inches and halfback Ethan Roberts picked that up to move the chains.

On the next play, Roberts was flung down for a loss and was separated from the ball. It lay tantalizingly on the turf before a group of players got there. Somehow Cabot North retained possession.

Though the Panthers needed all four downs and never picked up much yardage, they drained the clock to nail down the win.

As bad as the ending was for the Hornets, the start was great. To open the game, Blake Everett ran back the kickoff 68 yards to the Cabot North 14. A 5-yard pickup by Fabian Torres set up Burnett, the Hornets’ quarterback, with a 9-yard touchdown run.

A try for two failed but it wasn’t long before the offense was back on the field. Cabot North went four and out. A fourth-and-4 pass from the 40 by Perkins under pressure from Gavin Burton, fell incomplete. 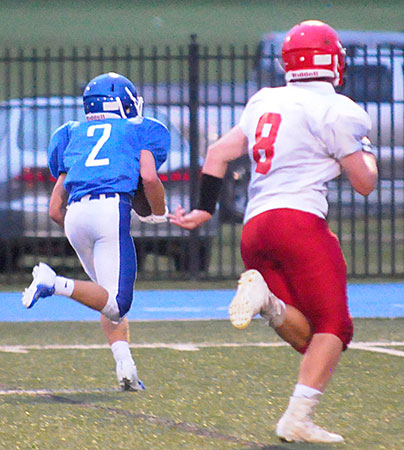 The Hornets took over on downs and, on their third snap, Burnett found Lawson Speer over the middle. He raced to the corner of the goal line and scored with 3:57 left in the first quarter.

A try for a two-point conversion again failed but the Hornets were up two scores.

Cabot North got on the board with a 40-yard run by Roberts. And when Perkins threw to Fitch for the two-point conversion, the lead was cut to 12-8.

Despite a 9-yard run on first down by Torres, the Hornets were unable to muster a first down and punted it away. A play later, Oldham burst through and galloped 50 yards for a touchdown. Perkins found Hayden Phillips for the conversion and, seconds into the second quarter, the final score was on the board.

But Burnett was sacked on first down there. He followed with a 9-yard keeper, but a third-down pass incompletion left the Hornets needing six yards to keep the drive going.

Burnett dumped off a pass to Torres and he started lacing his way through the Cabot North defense. Unfortunately, he was tracked down at the 9, a yard short.

Cabot North took over on downs and, though they picked up a first down, wound up having to punt.

But the drive stalled with :26 left. A pair of passes wound up combining for only 2 yards gained. A pair of incomplete passes followed, and Cabot North took over on downs as the half concluded.

The loss ended a 28-game winning streak for Bryant freshman teams over the last four seasons. The Hornets will try to start a new win streak next Thursday when they host Lake Hamilton. 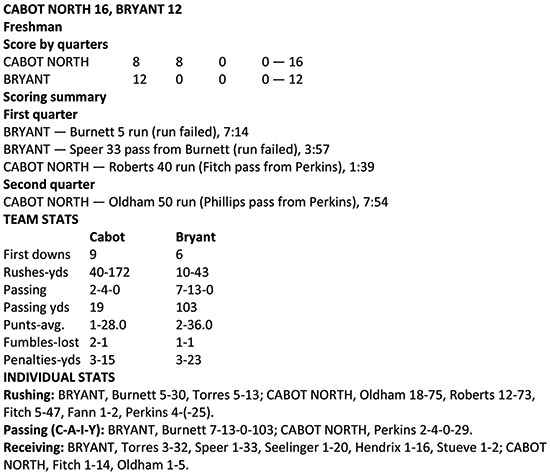